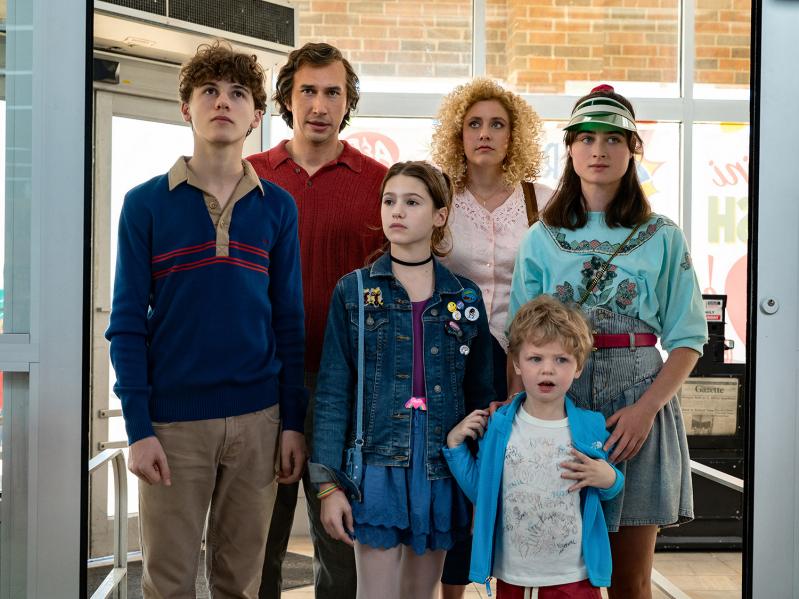 In the film “White Noise,” from left, Sam Nivola, Adam Driver, May Nivola, Greta Gerwig, one of the twins Dean Moore or Henry Moore, and Raffey Cassidy play members of the Gladney family.
Wilson Webb/Netflix © 2022
By Jennifer Landes

Viewers of Noah Baumbach's latest film, "White Noise," may know of the director's connection to the area (a house on the North Fork), but might be surprised to find another East End connection. It's of a more recent vintage, but with long and illustrious roots.

Nivola is a storied last name on the South Fork, with the artist Costantino Nivola purchasing a 35-acre property in Springs back in the 1940s as one of the early settlers of East Hampton's Abstract Expressionist art colony.

Nivola's two children, Claire and Pietro, preserved much of the family's land through an East Hampton Town purchase with money from the community preservation fund, protecting the land from future development. Alessandro, a son of Pietro (and a grandson of Costantino and Ruth Guggenheim Nivola), has a house nearby.

As to the film, it was released in theaters after Thanksgiving and then became available to stream on Netflix on Dec. 30. It has received mixed reviews, with most of the negative ones noting how impossible a film it was to make. Based on Don DeLillo's novel of the same title, the story is set in the 1980s when an "airborne toxic event" wreaks havoc in an area of Ohio.

The same panic, fear of death, and dread of the unknown involved in the fictional event feel viscerally reminiscent of the early days, and even some more recent ones, of our world during and semi-post Covid. The film, with its electric-hued consumer packaging and goofy clothes, is dreamlike and self-consciously aware of its references to the past. It's a world difficult to become lost in, because the reality, as well as the dialogue, is heightened and abstracted at the same time.

The main characters' relationship to their children is key to the plot. Many of their choices don't make sense or are made without thought to their consequences, and yet their paternal and maternal love is strong. The kids are foils for their parents' impulses, either familial or self-centered, and pull them back when the tether unravels too far from home base.

This is not the only acting project for either Sam or May, who are 19 and 13. Sam is in an upcoming Bradley Cooper film on the life of Leonard Bernstein made for Netflix. He was also in a limited series for the BBC and Amazon Studios, "The Pursuit of Love," which was written and directed by Ms. Mortimer. His first acting gig was in his parents' series "Doll and Em," which starred and was co-created and co-written by his mother and produced by his father for their company King Bee Productions. A short film that Sam directed and wrote, and in which he starred with his family, was included in the Tribeca Film Festival.

May also appeared in "The Pursuit of Love" and debuted in the film "Head Full of Honey."

The children were cast in "White Noise" after Mr. Baumbach called their school to see if there were students who might be appropriate for the roles. With pre-production and filming during Covid, most of the interviews and early preparation work happened over Zoom.

At the press conference after the film's North American premiere at the New York Film Festival, the director said casting children is always a challenge, but he was very lucky in finding the actors who played these roles.

At that same press conference, Sam credited a choreographer on the set for helping make sense of one of the family scenes that felt like a dance. "It made it a lot easier to think about what you were trying to do in your own head when you can be settled in your external environment."

May said the rehearsals and time spent together with the cast helped her think of the other actors as an actual family. "I've known Sam for my whole life, and I got way closer to him than I've ever been."