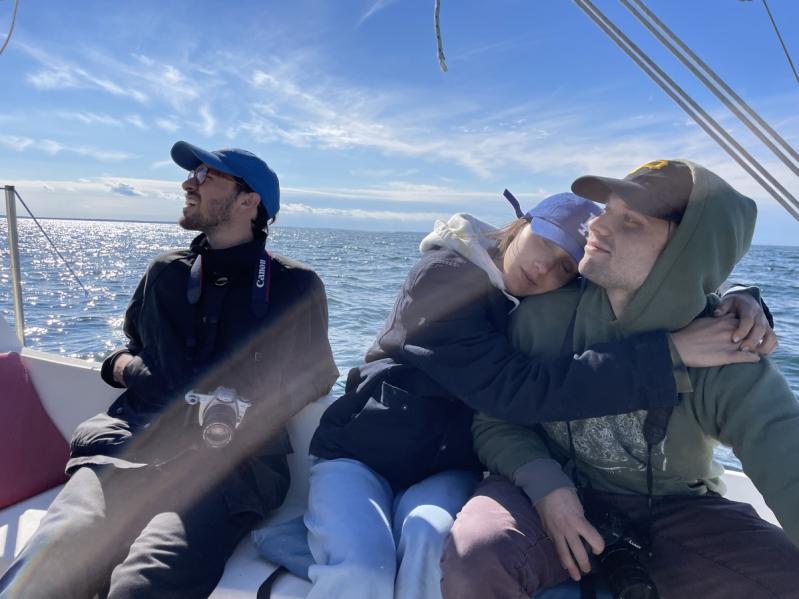 Crew members of "The End" took boats out to film Gardiner's Island for the documentary short to be shown at the Hamptons Film Festival.
Emily Sundberg
By Jennifer Landes

Growing up on Long Island and in New York City, Emily Sundberg developed an appreciation for the region's history. It came from both her father, who was a teacher, and her grandfather, whose boat they used to navigate area waters.

"I always thought that there was so much more to Long Island history than we learned in our textbooks," she said recently. She had always spent a lot of time in Montauk, and one day while looking at a map she discovered Gardiner's Island. "It surprised me that it existed, so I independently started researching it."

She went to the usual sources: libraries, historical societies, and people we may take for granted now but who are not always going to be there to answer our questions. She started with Richard Barons, who has since moved away but was still at the East Hampton Historical Society when Ms. Sundberg started her quest some three years ago. She also spoke to Hugh King and Karl Grossman, among others who had some experience with the island as historians, storytellers, or in some other capacity.

As she had several friends in the film industry, including Jack Mankiewicz, her associate producer, who has a last name synonymous with movie history, she realized taking her discoveries and putting them on film made the most sense. The result is "The End," a short documentary about Gardiner's Island that will be shown in the Hamptons International Film Festival on Oct. 13 and 15 as part of its Views From Long Island shorts program.

After receiving a creative grant, she brought some friends out east and met with Mr. King, Mr. Grossman, and Mr. Barons, along with a few others with knowledge of the area.

"It just started unfolding really quickly," Ms. Sundberg recalled. "There's the acquisition, then the family management, and then there's like the little Willy Wonka period when Robert David Lion Gardiner sort of opened up the access to the island and let people on."

Through further research in archives and even Facebook groups "all of these stories started bubbling to the surface about people who stayed there as Boy Scouts and people who had spent time working on the island or living there at different points. It became this really magical thing that unfolded in ways that I did not expect at all."

The documentary has its share of talking heads, but it's enhanced with their own footage of the island taken by boat and from Gerard Drive in Springs. There is some great footage from the Suffolk County Historical Society of Mr. Gardiner leading people on tours of the island. Ms. Sundland said she felt he became the anchor for the film, which is a palatable mix of fact and lore in a format likely to bring renewed interest to the island and its role in the history of the town. It will also serve as a further record when the people she spoke to, some of whom knew Mr. Gardiner when he was alive and the last "lord of the manor," are no longer with us to share their memories.