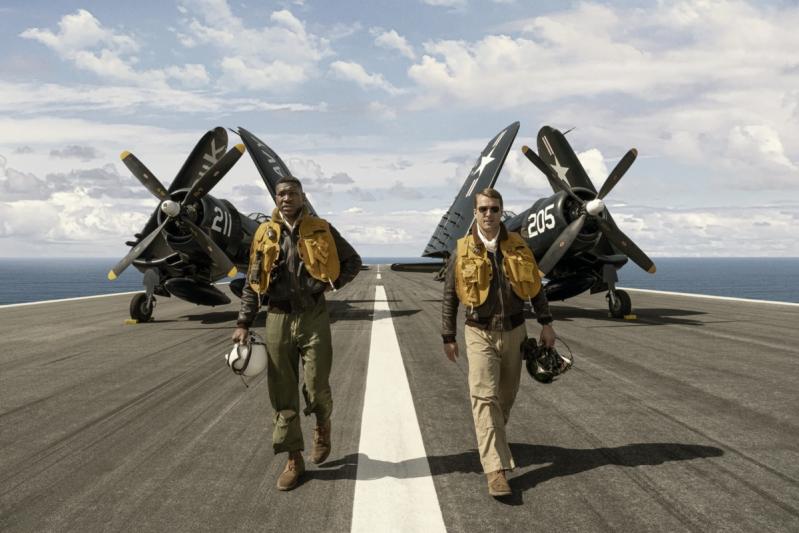 Jonathan Majors and Glen Powell in Columbia Pictures' "Devotion," which will be screened at the Hamptons Film Festival.
Devotion Movie LLC
By Jennifer Landes

The Hamptons International Film Festival, which is celebrating 30 years with a full and expanded 10-day schedule, announced its entire slate of films and events on Friday.

The festival, which opens with the previously announced "Living" by Oliver Hermanus, will close with "SR," a documentary about Robert Downey Sr. directed by Chris Smith.

"Women Talking," directed by Sarah Polley with a cast featuring Claire Foy, Rooney Mara, Judith Ivey, Ben Whishaw, and Frances McDormand, will be a Centerpiece film along with "The Son" by Florian Zeller.

Rowdy Talks return this year, led by Chris Columbus, who will discuss his career in the industry, directing, writing, and producing films such as "Gremlins," "The Goonies," "Home Alone," and "Mrs. Doubtfire," among many others. Martin McDonagh, whose film "The Banshees of Inisherin" will be shown at the festival, will also participate in a conversation about his career.

This year's selections in competition are Lukas Dhont's "Close," Daniel Goldhaber, Ariela Barer, Jordan Sjol, and Daniel Garber’s "How to Blow Up a Pipeline," Davy Chou's "Return to Seoul," Lola Quivoron's "Rodeo," and Sadaf Foroughi's "Summer With Hope" in the narrative section. Documentaries in competition are Shaunak Sen's "All That Breathes," Christopher Sharp and Moses Bwayo's "The People's President," Tamana Ayazi and Marcel Mettelsiefen's "In Her Hands," Sinead O'Shea's "Pray for Our Sinners," and Casey Neistat's "Under the Influence."

The jury for this year is composed of Opal H. Bennett, an Emmy Award-winning short-films co-producer; Jordan Hoffman, an entertainment writer; Regina Scully, a documentary films producer; Fred Berner, a producer and director of films, television, and theater; Jeb Brody, president of production at Amblin Partners, and Rajendra Roy, a past director of programming and artistic director at HIFF who is now the chief curator of film at the Museum of Modern Art.

This year's Conflict and Resolution signature program will have the United States premiere of Evgeny Afineevsky's "Freedom on Fire: Ukraine's Fight for Freedom." It will also include the films "Our Father, the Devil," directed by Ellie Foumbi, "Retrograde" by Matthew Heineman, "The Swimmers" by Sally El Hosaini, and "A Radical Life" by Ricki Stern.

Taking a more regional focus, the Views From Long Island section has Markie Hancock's "The Power of Community: How One Town Stood Against Domestic Violence," about the Retreat in East Hampton; Lindsay Keys and Winslow Crane-Murdoch's "The Quiet Epidemic," about chronic Lyme disease, and Xavier Manrique's "Who Invited Charlie?" written by Nicholas Schutt.

There are also several new titles announced in the World Cinema category. The documentaries "All the Beauty and the Bloodshed" by Laura Poitras, "The Cave of Adullam" by Laura Checkoway, "De Humani Corporis Fabrica" by Verena Paravel and Lucien Castaing-Taylor, "Descendant" by Margaret Brown, "The Exiles" by Ben Klein and Violet Columbus, "The Fire That Took Her" by Patricia E. Gillespie, "Groucho & Cavett" by Robert S. Bader, "Louis Armstrong's Black & Blues" by Sacha Jenkins, and "Naked Gardens" by Ivete Lucas and Patrick Bresnan join the previously announced "Desperate Souls, Dark City, and the Legend of Midnight Cowboy," "Good Night Oppy," "January 6th," and "The Volcano: Rescue From Whakaari."

New narrative titles in this section are "Aftersun" by Charlotte Wells, "Alcarras" by Carla Simon, "Broker" by Hirokazu Kore-eda, "Corsage" by Marie Kreutzer, "Chrissy Judy" by Todd Flaherty, "Karaoke" by Moshe Rosenthal, "More Than Ever" by Emily Atef, "Nanny" by Nikyatu Jusu, "One Fine Morning" by Mia Hansen-Love, and "Triangle of Sadness" by Ruben Ostlund. The other films in the section are "Decision to Leave" and "Pinball: The Man Who Saved the Game."

In the Compassion, Justice, and Animal Rights section, there are two films, "EO" by Jerzy Skolimowski and "Kentucky Pride," made in 1925 by John Ford and featuring 4K restoration and a story from the perspective of a thoroughbred race horse. Live piano accompaniment will be provided by Donald Sosin.

This year's Air, Land, and Sea selections, which focus on climate and the environment, are Francisca Alegria's "The Cow Who Sang a Song Into the Future," Volker Schlondorff's "The Forest Maker," and Jennifer Baichwal's "Into the Weeds: Dewayne 'Lee' Johnson vs. Monsanto Company."

According to the festival, this year's selections are 54-percent female-directed and represent 34 countries from around the world. Included in the titles are several East Coast premieres and a few films never screened before publicly in this country or internationally.

The festival runs from Oct. 7 to Oct. 16. Passes and packages are now for sale on the website. A presale for members begins on Saturday. Individual tickets go on sale to the general public on Monday.