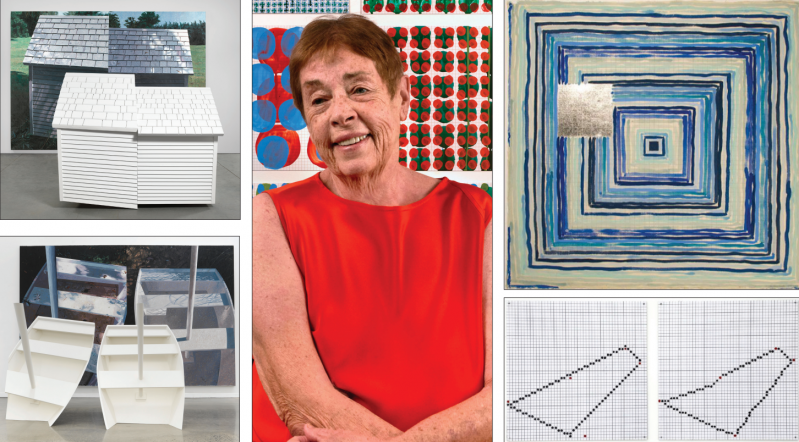 Jennifer Bartlett, center, spent her career balancing figuration and abstraction, and even painting and sculpture, in works such as "Double House" and "Boats," left, both from 1987. At right are works from her recent show at the Drawing Room, "Homan-ji," from 1995, top, and "Swimming Pool," a diptych from 1970-72.
Bartlett Image: Takaaki Matsumoto. Artwork: Tom Powell, Christopher Burke, and Jennifer Gorman Photos / © Jennifer Bartlett. Courtesy of Paula Cooper Gallery, New York, Marianne Boesky Gallery, New York, and the Jennifer Bartlett 2013 Trust
By Mark Segal

Jennifer Bartlett was already established as one of the most important American artists of her time when, in 1976, she first showed "Rhapsody" at the Paula Cooper Gallery in SoHo. Consisting of 987 one-foot-square steel plates, painted in a variety of styles, the work entered the collection of the Museum of Modern Art in 2005 and was installed in its galleries most recently in 2019.

In a preview of that MoMA installation, which would be part of the museum's reopening, Roberta Smith of The New York Times called the work a "jubilant battle of artistic styles and mind-sets [that] covers stark geometric abstraction, paint-by-numbers realism and everything in between. It looks ever more prescient and in some ways exemplifies the pluralism that MoMA needs to aim for in its next life."

Klaus Ottmann, a curator and critic who organized the exhibition "Jennifer Bartlett: History of the Universe -- Works 1970-2011" for the Parrish Art Museum in 2013, has called "Rhapsody" "probably one of the most important works of art of the 20th century."

The artist, who was 81 when she died of leukemia on July 25, had been a full-time resident of Amagansett since 2015, having had a home there for several decades prior.

The Drawing Room in East Hampton's first Bartlett exhibition, in 2007, focused on a series of pastels of the native wetlands in the backyard.

"My time in her studio deepened my appreciation for Jennifer's unique integration of place as a subject for painting," said Emily Goldstein, who'd founded the gallery three years before with Victoria Munroe. "The indoor and outdoor environments Jennifer created and transformed were rich expressions of her sensibilities, and nourishing sources of imagery that live on in her incredible oeuvre."

Her most recent exhibition there, which closed on Aug. 8, was the gallery's fifth solo show of her work. "There is a poignancy to having her show on view at this moment," said Ms. Goldstein in early August. "Visitors have been enjoying the atmosphere in the gallery and presence of salient through lines in Jennifer's long career that quietly echo through the space."

"Jennifer Bartlett: History of the Universe -- Works 1970-2011" opened at the Pennsylvania Academy of Fine Arts in 2013 before traveling to Water Mill the following year.

Terrie Sultan, who was the Parrish's director at the time, recalled the artist and the exhibition. "Jennifer Bartlett had always been something of a hero-artist to me, someone who traveled her own path, innovative in her use of materials and her subject matter. She found ways to make the personal universal, and to traverse easily the seemingly immutable boundary between abstraction and representation."

The show was a "stunningly beautiful and intellectually engaging exhibition that gave our audiences a full and transformative picture of her special creativity. Her work simply soared in the lofty galleries, and she was as pleased as we were. To have worked with someone who made such a significant contribution to art history, and who was part of our artistic community, was a highlight of my twelve-year tenure."

In high school, Bartlett, who was born in Long Beach, Calif., saw a Van Gogh exhibition in Los Angeles, and "it knocked me out," she told her friend and fellow artist Elizabeth Murray in a 2005 Bomb magazine interview. "I had little exposure to art but knew I was going to be a painter."

She received a B.A. from Mills College in Oakland, Calif., where she'd met Ms. Murray, before heading east to New Haven, where she earned B.F.A. and M.F.A. degrees from the Yale University School of Art and Architecture. Recent graduates and current students at that time included Richard Serra, Brice Marden, Chuck Close, and Nancy Graves.

While at Yale, she married Ed Bartlett, a medical student there. They moved to Greene Street in SoHo in the late 1960s, where her neighbors and friends included Mr. Serra, Ms. Graves, Mr. Close, Joe Zucker, and Joel Shapiro. "With Chuck, Joe, and me, there were lots of dots on Greene and Prince Streets," she told Ms. Murray. She and Mr. Bartlett were divorced in 1972.

Her first show in New York was at the Reese Paley Gallery in SoHo in 1971. Her relationship with the Paula Cooper Gallery began a year later, when she took part in a poetry reading there, and a solo show of her innovative steel plate paintings followed soon after.

James Joyce once said that "mistakes are our portals of discovery." Between making mistakes on graph paper or soiling it with spilled coffee, Bartlett decided she needed a hard surface that could be cleaned and reworked. "I wanted a unit that could go around corners on the wall, stack for shipping. If you made a painting and wanted it to be longer, you could add plates," she told Ms. Murray.

After "Rhapsody," the artist moved back and forth between abstraction and figuration, questioning their opposition, "from Minimalist vigor into Postminimalist free-spiritedness and on to Maximalist exuberance, exploring various materials," wrote Mr. Ottmann in the catalog for the Parrish show.

"That’s the only thing I could never figure out, what figurative meant," Bartlett said during her conversation with Ms. Murray. "If a painting is white with a red square in the center, it’s a red square. That is a thing. That is just as figurative to me as a blooming peony."

The house, a recurring image and theme in her work, first appeared in "House Piece" from 1970. "A house is basically a square and a triangle within a rectangle," she told the California gallerist and art consultant Leisa Austin. "It exudes a human presence, but it is totally abstract."

In 2007, working from her own photographs, she painted a series of large diptychs of the shores, skies, marsh grass, and houses, including her own, in and around Amagansett. She used graining brushes constructed with multiple bristle groups to freely paint crosshatched marks that partially obscure her imagery. "So I liberated myself from the dot, but not from the grid," she said in an interview for the Parrish exhibition catalog.

In 1985, the Walker Art Center in Minneapolis organized a retrospective exhibition that subsequently traveled to the Nelson-Atkins Museum of Art, in Kansas City, Mo., the Brooklyn Museum, the La Jolla Museum of Contemporary Arts, and the Museum of Art, Carnegie Institute, Pittsburgh. In that same year, the artist published an autobiographical novel called "A History of the Universe."

"Celebrated painter Bartlett's first novel is, not surprisingly, a visual work that presents a series of memories, impressions, descriptions of individuals and snatches of conversations. The result is a colorful design that is sometimes representational, sometimes abstract," said Publishers Weekly.