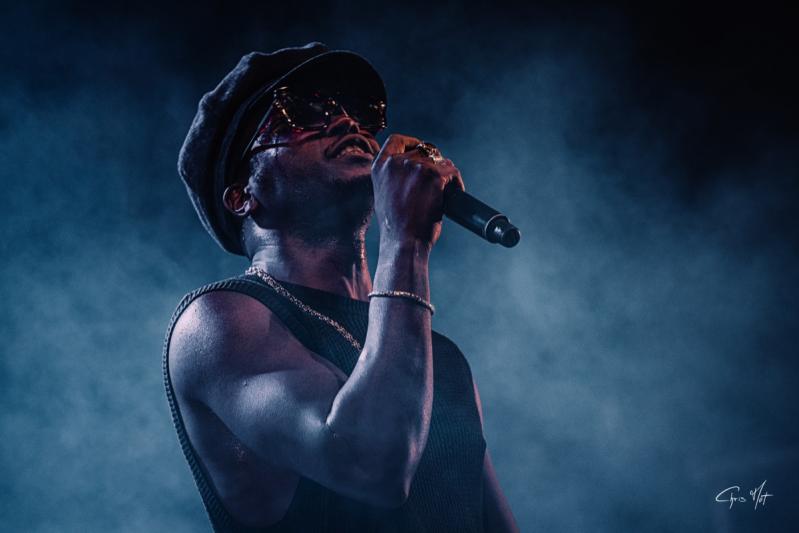 Cimafunk, who is touring behind his new album, "El Alimento," will play the Stephen Talkhouse on Saturday.
Chris Mat
By Christopher Walsh

The hot summer of 2022 will heat up a little more on Saturday at 8 p.m. when Cimafunk, a.k.a. the Cuban vocalist and composer Erik Alejandro Iglesias Rodriguez, and his nine-piece band take the stage at the Stephen Talkhouse in Amagansett.

The artist is touring behind his sophomore album, "El Alimento" ("The Nourishment"), which features guests including Ceelo Green, Lupe Fiasco, Chucho Valdes, and the funk godfather George Clinton.

The current tour comes amid a string of concerts at "packed venues in Europe," said the promoter Ron Delsener, who owns a house in East Hampton. Cimafunk performed at a private event in Bridgehampton on Friday.

Mr. Delsener, a veteran of the concert industry, likens Cimafunk to "a cross between Jackie Wilson, Fela Kuti, and James Brown." The artist is "an exciting, charismatic guy," who he first saw at the Blue Note in Manhattan. "People were dancing, rocking with this band" at the legendary jazz club. "They were going nuts." Cimafunk, he said, "is breaking like crazy."

"I had heard the name before but was unfamiliar with his music," Max Honerkamp of the Talkhouse said, adding that a plan to book Cimafunk last winter was abandoned in another surge in Covid-19 transmission. "The agent reconnected for a summer date and once I saw the festivals he was playing," including the New Orleans Jazz and Heritage Festival in May, "I just had a feeling the buzz was real. I have yet to see him live but have a feeling it will be one of our best shows this summer. From what I can tell he is not just a great musician, but a great live performer."

Billboard magazine listed Cimafunk as one of its top 10 Latin artists to watch in 2019. That year, he made his American debut at the South by Southwest festival in Austin, Tex., where he "took the festival by storm with his high-energy stage show, outlandish costumes, and the band's top-level musicianship," according to the website Allmusic.com. "Cimafunk sold out shows in Washington, D.C., Miami, Chicago, New Orleans, Los Angeles, Mexico, and all across Europe before returning to the States to perform at New York's Central Park SummerStage."

"El Alimento" was co-produced by the Grammy Award-winning Jack Splash, who has worked with musicians including Kendrick Lamar, Alicia Keys, John Legend, and Solange. It was ranked number three on Rolling Stone magazine's Spanish-Language and Bilingual Albums of 2021 and number 23 on its 50 Best Albums of 2021.

Upon the album's release in October, The New York Times, which called it "a frenetic joyride of freewheeling blasts of percussive funk intercut with pumped-up versions of classic Cuban riffs called timbaos," quoted Mr. Clinton, whose own frenetic joyrides of freewheeling funk are renowned. "What Cima is doing is like a brand-new funk," he told The Times.