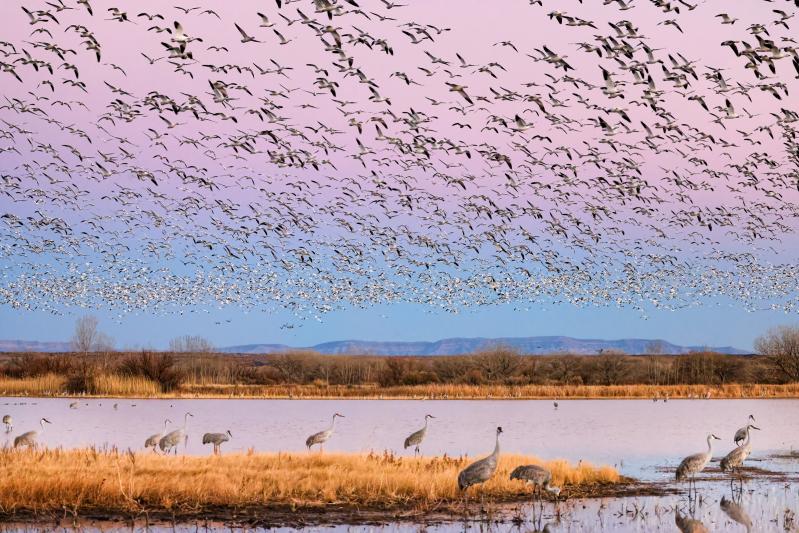 Sandhill cranes and snow geese are the subject of this photo from the National Audubon Society, which will receive the proceeds from the project.
Marti Phillips/Audubon Photography Award
By Christopher Gangemi

"For the Birds: The Birdsong Project" alighted on July 30 at Laurie Anderson's Bird House in Springs for an evening of music and consciousness-raising.

The project began during the pandemic as the music supervisor Randall Poster, like many others, became more in tune with the sounds of the birds just outside his windows. Mr. Poster, who won a Grammy Award for the "Boardwalk Empire" soundtrack in 2011, contacted friends and musicians, and in relatively short order had over 170 songs inspired by birds, and often featuring birdsong.

At first, he was unsure how to proceed, "What the heck are you going to do with 150 songs about birds?" he asked rhetorically during the July 30 event. On a nearby table was the answer: a 20-album box set, full of color, artwork, poems, and original songs.

So far, 12 of albums have been released for streaming; the next four albums will begin streaming on Friday, Aug. 26, followed by the last four on Sept. 30, according to Samantha Uzbay, the music coordinator of the project. The physical version, the 20-record box set, with album art by Barrie Goshko and Elsa Kuhn, among others, arrives in late autumn.

"All proceeds from the sales of the music are to the benefit of the National Audubon Society," explained Mr. Poster, before welcoming Ms. Anderson onto her porch to play her song, "Before the World," which kicks off the 12th album of the set.

"Birdsongs calls attention to how art can help us connect with people, communicate what birds tell us, and inspire conservation action. We are immensely grateful for the partnership with Randall and the 200-plus artists, and all who are listening and enjoying the music and positioned to act. They are all an instrumental part of protecting birds and the places they need," said Sean O'Connor, the chief development officer for Audubon.

The scope of the project is, at first, daunting. There are so many artists, representing nearly all genres, that you're forced to give into it and accept it on its own terms. Birdsong is the thread that holds it all together. Artists as disparate as Yo Yo Ma, Alice Coltrane, Henry Wadsworth Longfellow, and Lee Ranaldo of Sonic Youth, defer to the theme, and become part of the whole. Overall, the collection is a mellow and thoughtful listen, aided by poetry, every fourth or fifth song.

Some songs begin with snippets of birdsong, where others end with it. Occasionally, like in the Flaming Lips song, "Lucifer Hummingbird" the birds are featured throughout. The bird connection gives it a drifting quality, as it sometimes feels like one long track that's slipping in and out of birdsong. At times, the human music seems incidental to the bird music, which is nice, as birds are the world's original entertainers.

At times it feels like listening to music with the volume low and the windows open, allowing birdsong to enter the music from outside, becoming one with the sounds from your speakers.

Groups of songs begin to stick out. A particularly birdy song, "Baepholus" by the electronic music composer Ben Lukas Boysen, features familiar feeder birds. A mourning dove, a cardinal, and then a titmouse, sing in the background as the piano wanders around, lazily lulling the listener into the next track, a Galway Kinnell poem, "How Many Nights" read by Michelle Williams. The poem resolves into another instrumental track, the twinkling "Goldfinch Yodel" by the English composer Arthur Jeffes before the song "Birds" by Koreless begins to softly pulse.

"Birds are our key indicator that our landscaping practices are good," said Edwina Von Gal, the founder of the Perfect Earth Project, at the July 30 event. "If you're providing habitat for the birds, you're doing it right," she said.

Ms. Von Gal became involved with "For the Birds" after Ms. Anderson urged her to contact Mr. Poster. "You're raising awareness for the birds, but then what?" she said she asked Mr. Poster. Ms. Von Gal also seeks to create a practical, down to earth, simple-to-understand benefit for birds through her 2/3 for the Birds project. The premise is simple: Plant at least two native species for every non-native species you plant.

Birders talk about their "spark bird," the bird that first drew their awareness. Ms. Von Gal said she wanted to expand that concept to include a "spark moment, or, the moment that you realize you have a role that you can play in your landscape for the birds and for the earth."

After Ms. Anderson played "Before the World" she moved into her song "Nothing Left But Their Names" from "Landfall," her 2017 collaboration with the Kronos Quartet. In the song, she catalogs extinct animals. The juxtaposition was clear.

As the drone from her instrument quieted, she modulated her voice lower. "Now, you know the reason that I really love the stars is that we cannot hurt them," she said. "We can't burn them, we can't melt them or make them overflow. We can't flood them or blow them up. Or turn them out. But we are reaching for them. We are reaching for them."

With that, the music, a synthesized-sounding violin, picked up and lifted off, like a bird moving off a tree branch. Then the piece ended.

Ms. Anderson sat on the side of her porch and talked about the ancient Aristophanes play "The Birds," from 414 B.C. It was heady stuff, and indicative of the fact that birds and humans have forever been wrapped together.

One was left wondering if 20 albums were enough.