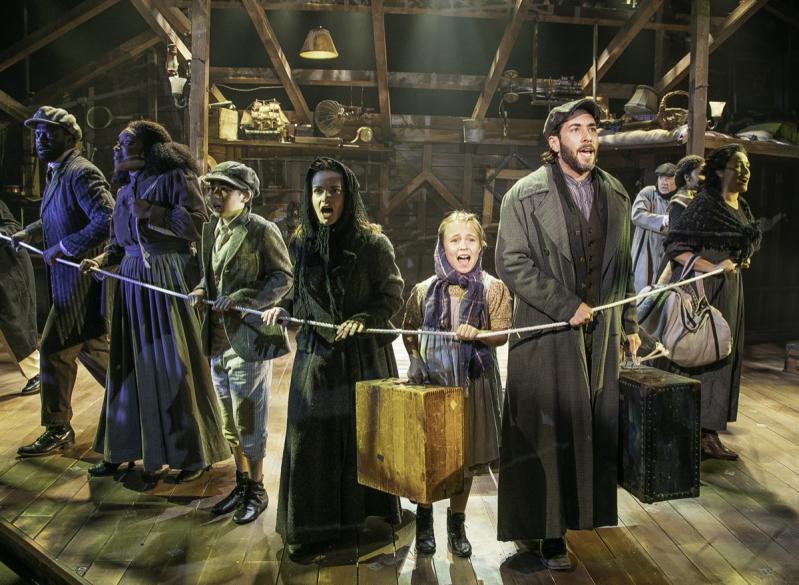 "Ragtime," with an ensemble of cast members, is more resonant today than when it premiered in 1998.
Lenny Stucker/Bay Street Theater
By Kurt Wenzel

The musical "Ragtime" first opened in 1998 and now returns in revival at Sag Harbor's Bay Street Theater through Aug. 28. The timing is notably auspicious: The E.L. Doctorow novel on which it is based is a celebration of the beginning of America's 20th century. Now here we are almost exactly a hundred years later, at the beginning of a new one.

Bay Street's production of "Ragtime" is both wildly entertaining and on occasion emotionally rousing. It is so satisfying a show that it is almost puzzling to remember the lukewarm reviews of the 1998 production. Is it possible this is because its themes have become almost more trenchant over the last 30 years? "Ragtime" wrestles with immigration, the introduction of new technology, worker exploitation, crass exhibitionism and media, and, first and foremost, race relations, all of this in a way that might seem even fresher than it did back in 1998.

Part of the genius of Doctorow's novel, some will remember, was how it weaved together both historical and fictional characters, and the musical abides by this formula. As the show opens, it is 1906, and we are introduced to three different social strata of New York: an upper-middle-class family in New Rochelle, a black pianist in Harlem, and a Jewish immigrant from Latvia trying to survive on the Lower East Side.

Soon we meet Evelyn Nesbit, the real-life mistress of the architect Stanford White, who was murdered by Nesbit's husband in a jealous rage in what was called "the crime of the century." ("Ragtime" cleverly mocks how the century was only six years old!) Henry Ford appears, introducing his assembly line production, as does Emma Goldman, the socialist organizer, along with Harry Houdini and others.

"Ragtime" depicts a hectic age of industrialization, the dawn of movies and organized sports, an exploding media landscape, and of course musical innovation -- all of which this production brings to life with exuberance and energy. Unlike last year's Bay Street production of "Camelot," which wilted with the stress of a small cast trying to manifest a large social milieu, the director, Will Pomerantz, floods the stage with energetic performances that never seem antic or harried, and the audience gets a real sense of a dynamic, vigorous age.

To a person the cast here is smashing, and though the musical is meant to be an ensemble, it is carried by two primary characters, Mother, of the New Rochelle house, and Coalhouse Walker, the Harlem pianist. Lora Lee Gayer, who convincingly plays Mother, takes on some of the more demanding vocals of the score and hits them flawlessly, culminating with the second-act showstopper, "Back to Before." As an actress, Ms. Gayer tackles both independence and empathy with precision.

Coalhouse is portrayed by the imposing Derrick Davis, a performer who brings a commanding power that dominates the stage. Coalhouse is a tough role -- the character will know the great joy of love and the depths of despair, and, finally, furious anger -- and Mr. Davis delivers, all the while singing beautifully in a rich baritone.

Other notable performances are by Zachary Prince as the immigrant Tateh, and Kyrie Courter, who takes on Sarah seemingly without fear of comparisons to none other than Audra McDonald, who played Sarah in the original.

Of course "Ragtime" is a costume designer's dream, and Hunter Kaczorowski seems to have had a blast with linen suits, suspenders, ankle-length dresses, and a number of hats, all of which appear pitch perfect. The scenic designer Anna Louizos's Swiss army knife of a set is generic enough to portray both an expansive New Rochelle country house and Manhattan's Morgan Library. And the small five-person orchestra felt much bigger, especially in the larger set-piece numbers, which include the "Ragtime" prologue and the manic, and very funny, baseball number "What a Game."

The relatively small cast is asked to take on four or five roles each, and this sometimes creates some confusion when distinctive-looking actors take on different characters. But why quibble with such an otherwise terrific revival? The production I saw concluded with an extended standing ovation -- testimony to a thoroughly satisfying, crowd-pleasing show, and one of the better musicals performed at Bay Street in recent years.