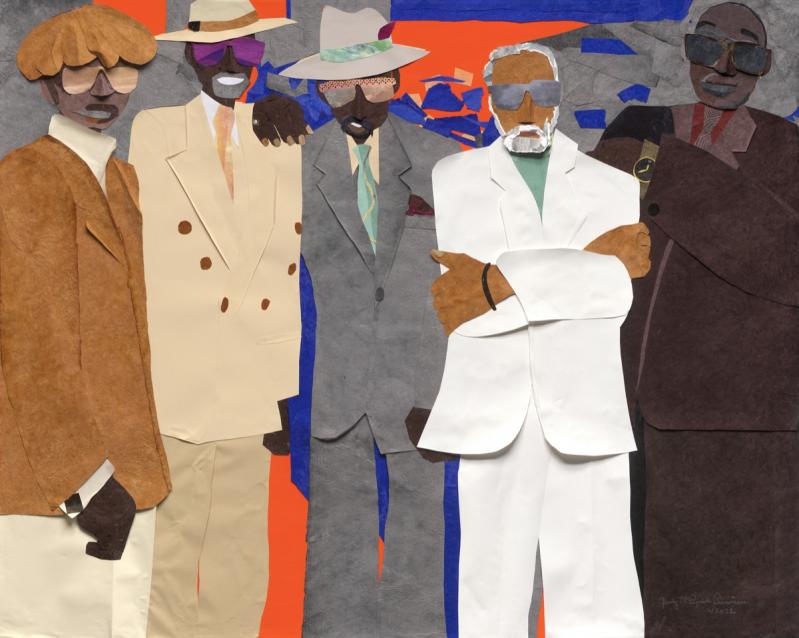 Judy Bowman's "Detroit Swagger" is in the "Collage/Assemblage" show at Eric Firestone in East Hampton.
By Mark Segal

Collage and Assemblage
"Collage/Assemblage," on view through Aug. 6 at Eric Firestone Gallery in East Hampton, juxtaposes the work of historic and contemporary artists who use collage and assemblage in their practices.

Among them are Shinique Smith and Emmanuel Massillon, whose work explores issues of identity and hybridity; Joe Overstreet, who collages strips of acrylic paint over his stretched canvases; James Phillips, whose compositions reflect his association with AfriCOBRA, a Chicago-based group of African-American artists, and Varnette Honeywood, Judy Bowman, and Derrick Adams, whose collage works celebrate Black culture.

LongHouse Talks
The talks series at LongHouse Reserve in East Hampton will continue with talks by Michele Oka Doner on Saturday at 5 p.m., and Glenn Adamson on Sunday afternoon at 3.

An artist and writer who works in a variety of mediums, Ms. Doner will consider the symbiotic connection between art, nature, and human life. Mr. Adamson, LongHouse's new curator at large, will discuss his recent book, "Craft: An American History," which contextualizes the postwar studio craft movement.

The first American commission of the Taiwanese artist Cheng Tsung Feng, a human-scale bamboo pavilion, will be reconstructed at LongHouse by the artist from Saturday through Wednesday. Visitors have been invited to witness the process, and Mr. Feng will lead a bamboo workshop from 10 to noon on Wednesday.

Tickets for the talks and workshop are $35, $25 for members.

Stella at The End
A  survey of Frank Stella's sculpture from 1993 to the present is on view in two installations at the Ranch in Montauk. Conceived in collaboration with the artist, the show includes an outdoor presentation of five monumental sculptures that can be seen through Nov. 1, and, in the west barn through July 31, a selection of smaller-scale sculptures and wall-bound constructions.

Most of the works are united by suggestions of movement. For example, the star sculptures represent Mr. Stella's interest in complex geometry and celestial motion.

Interior Scenes
The Southampton outpost of Christie's auction house is presenting "The Great Indoors," the second exhibition of its summer season. A survey of interior scenes by modern masters, including Edgar Degas, Henri Matisse, Milton Avery, and Andrew Wyeth, as well as by contemporary artists, the exhibition explores the pivotal role the interior has played in art history by juxtaposing artworks from across a century.

The works are available for immediate purchase and on view through July 31.

The free lecture, which will take place at Hoie Hall behind St. Luke's Episcopal Church in East Hampton, as well as via Zoom, will cover the forensic authentication of "Untitled: Red, Black and Silver," reported to have been painted by Jackson Pollock for his lover outside his Springs studio, three weeks before his death in 1956.

Video and Design
The Southampton Arts Center will hold a free immersive viewing experience of video works by John Zieman oon Friday at 6 p.m. The artist will show a wide range of formats, from early videotape to 4K digital files, from cellphone to studio cinema cameras.

The arts center's fifth annual Architecture and Design Tour will take place next Thursday, starting at 11 a.m. The event will include brunch, an architectural panel, and tours of four Southampton properties. Panelists are Chris LaGuardia of LaGuardia Design Group, Blaze Makoid of BMA Architects, and Viola Rouhani of Stelle Lomont Rouhani Architects. The architect Siamak Samii will moderate.

Mythology at Tripoli
"Golden Horns," an exhibition of mixed-media works on paper by Angelbert Metoyer, is on view at the Tripoli Gallery in Wainscott through Aug. 1. Mr. Metoyer uses various materials, including paint, spray paint, graphite, tar, and gold dust.

The artist also uses text and the written word, both as a form of draftsmanship and as an additional way to communicate beyond brushstrokes, marks, and color choices. The mythology of time, space, and the bodies of unknown figures are also represented.

Three at Kramoris
An exhibition of work by Casey Chalem Anderson, Adriana Barone, and Roger Sichel is opening on Thursday at the Romany Kramoris Gallery in Sag Harbor, and will continue through July 28. A reception will be held Saturday from 5 to 6:30 p.m.

Ms. Anderson's paintings are inspired by and depict the East End landscape and its natural forms. Ms. Barone's paintings have vibrant colors, Twombly-like scribbles, and a few recognizable elements amid the mostly abstract marks. Mr. Sichel uses digital photography to create images inspired by his own life and current events.

Celebrating Diversity
"Caress," a show of paintings by Jeffrey Cheung, is on view at the Jack Hanley Gallery in East Hampton through July 31. The works feature naked androgynous figures, depicted in various shapes and body types.

Mr. Cheung's paintings celebrate diversity and create positive images that include queer and trans people, and people of color. His message is also conveyed by skateboard decks and Unity, a platform encompassing print, publishing, music, and skateboarding that offers a space for the QTBIPOC community.

Geometry, Reincarnation
"Vortex Activated," a show of paintings by Sky Kim, is on view at Chase Contemporary through July 18.

Ms. Kim's paintings, composed of intricate circles and spirals in vibrant colors, explore such themes as sacred geometry, quantum physics, and reincarnation, and reflect the artist's belief that humans exist simultaneously in multiple dimensions. The exhibition features works from her "Vortex" and "Multiverse" series.

Folk Art in Sag
An exhibition of woodcarvings by Warren McHugh, a self-taught folk artist, will open Saturday at Keyes Art in Sag Harbor with a reception from 6 to 8 p.m. and continue through Sept. 1.

McHugh summered in Sag Harbor from the 1960s to the mid-'80s. He opened the village's first art gallery, the Art Stall, in 1961. Later, he began to work with found objects. His carvings depict historical figures from the 18th and 19th centuries as well as literary and popular characters.

Ruby Jackson Solo
An exhibition of work by the Sag Harbor artist Ruby Jackson is opening on Thursday at the John Jermain Memorial Library there and will remain on view through Aug. 8.

A reception will take place on Sunday from 2 to 4 p.m.

The Shed Is Back
East Hampton Shed will open "Ultramarine Boring," an exhibition of paintings by Jordan Rhoat and Brad Phillips, on Saturday, with a reception from 6 to 8 p.m.

Mr. Rhoat sources photographs from Craigslist and transforms them into flat paintings whose often commonplace and fragmentary images include a plant on a windowsill and an open doorway.

Mr. Phillips's work veers between figuration and words and between relatively straightforward representation of people and humorous texts.

The exhibition will be open by appointment via [email protected] through July 31.

Shelter Island Artists
In connection with its current exhibition, "Once on This Island," which features work by artists who have lived and worked on Shelter Island, the Shelter Island Historical Society will present a series of lectures.

The artist Margaret Garrett, who organized the show, will speak next Thursday at 6 p.m. On July 28, the speakers will be the artists Karen Arm, Janet Culbertson, and Ned Smyth. Jules Feiffer will hold court on Aug. 4.

In addition to the above named, the exhibition includes work by John Chamberlain, Willem de Kooning, and Alan Shields.

Greek Portrait Busts
"Hellenic Heads," an exhibition of sculptures by George Petrides, can be seen at The Muses, a dining and event venue at the Greek Orthodox Church in Southampton, through Sept. 5.

The artist, who divides his time between New York City and Athens, Greece, set out to create portrait busts that represent six periods of Greek culture and history, from the Classical period (510 B.C. to 323 B.C.) to the present. Mr. Petrides has a personal connection to one historical event, the 1922 destruction of Smyrna; his grandmother fled Smyrna for Piraeus in 1922.

Mashashimuet Park's History and Future
A Conference for Young People to Create Solutions
Get Outside, Get Moving
END_OF_DOCUMENT_TOKEN_TO_BE_REPLACED