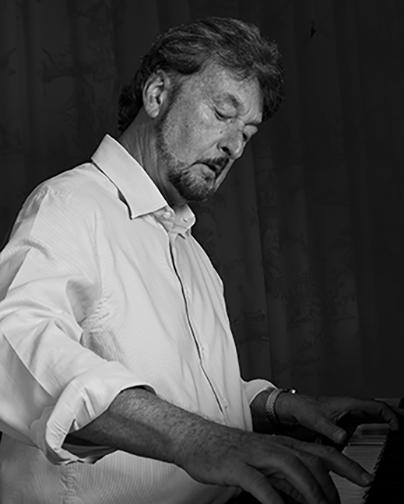 Rick Davies, of Supertramp fame, will lead Rocky and the Rockets tomorrow at the Stephen Talkhouse.
RDP, Inc.
By Christopher Walsh

Live music is back on the South Fork, and Friday's 7 p.m. performance by Ricky and the Rockets at the Stephen Talkhouse in Amagansett is likely to be a crowd favorite.

It was while on tour in Europe in 1985 that the members of Supertramp, one of the top British groups of the 1970s and '80s with hits including "Give a Little Bit," "The Logical Song," "Take the Long Way Home," and "Goodbye Stranger," found themselves too wired after a concert to retire for the night. At the hotel bar, Rick Davies, the band's co-founder, found a baby grand piano. The whole band was soon jamming on music by their influences, and before long a side project was born: As Supertramp toured the world, a suitable venue would be secured for an unannounced, post-concert performance by "Ricky and the Rockets," the band's musical alter ego.

The tradition continued and expanded, with the "band within a band" sometimes convening between Supertramp tours to perform at a private party or charity event.

On Friday, Mr. Davies, who lives in East Hampton Village, will be joined onstage by the Rockets' present incarnation, which includes the local residents G.E. Smith on guitar, Mike Reilly of Pure Prairie League on bass, Brad Beyer on harmonica and keyboards, Bill Donnelly on drums, Scott Kreitzer on saxophone, and Peter (Bosco) Michne on guitar.

Ron Delsener, another East Hampton resident and the New York chairman of Live Nation Entertainment, was pivotal to Ricky and the Rockets' rebirth. "It must have been about two, three years ago that Ron wanted to hear some blues and stuff going on at the Talkhouse," Mr. Davies said last week, "and thought it would be a good idea to hook up."

At the time, Mr. Davies was recovering from extensive treatment following a diagnosis of multiple myeloma, an incurable but manageable form of cancer. "I could hardly move," he recalled. "I was trying to get myself playing a little bit in the basement, in a studio I have."

Mr. Delsener introduced him to Mr. Smith, who lives in Amagansett, has toured or recorded with artists including Hall & Oates and Roger Waters, and was the longtime bandleader on "Saturday Night Live." "He got him to come over to the house, and we met," Mr. Davies said. "That was fun." A few other local musicians would come to jam and raise his spirits, and a new incarnation of Ricky and the Rockets took shape.

Mr. Davies is in remission and feeling "pretty good today," he said. The band plays "basically bluesy things with different arrangements, as opposed to going out and winging it. We rehearse a bit -- Fats Domino, Chuck Berry, various things. Some we will have played before, some will be new." The Rockets will perform a selection of Supertramp songs, he said.

"We have a good time," Mr. Smith said. "It's bluesy, and of course he does Supertramp stuff. It's a nice mix and a good band, all local guys. It's just a nice range of music that all fits together, like that Supertramp stuff -- amazingly, it fits right in with Fats Domino. It's not jarring to go from one to the other because a lot of it is based on Rick's piano playing, and he's a great player. It's a lot of fun for me, because I love doing gigs where I just get to listen and play along. We've rehearsed, and we semi-know what we're doing!"

The evening will be special for Mr. Davies for another reason: Pascal Bernardin, the first French concert promoter Supertramp worked with, will attend the performance. At Supertramp's first concert in France, "I think we had 15 paying customers," Mr. Davies said, and he and Roger Hodgson, another founding member of the band, argued over whether or not to play an encore. "I said I don't want to do an encore for 15 people. He said let's put it to the band, and the band said we should. We did it, and about three years later we were about the biggest foreign band in France."

General admission tickets for Ricky and the Rockets are $100 and available at the Talkhouse website.

Mashashimuet Park's History and Future
A Conference for Young People to Create Solutions
Get Outside, Get Moving
END_OF_DOCUMENT_TOKEN_TO_BE_REPLACED