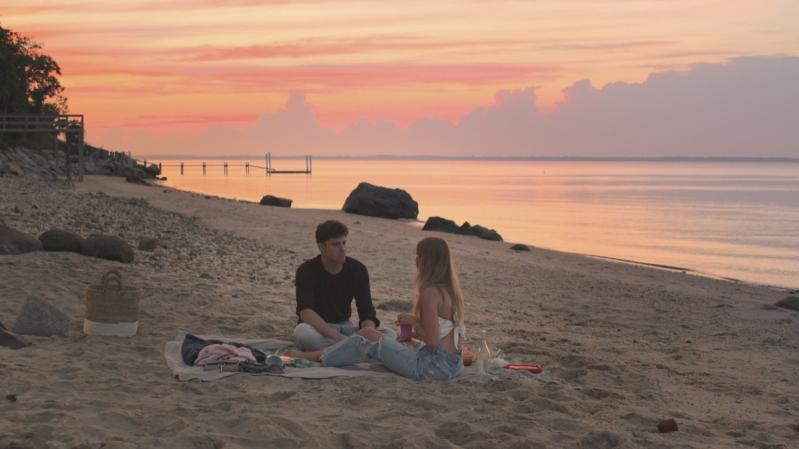 Ilan, one of the stars of "Forever Summer: Hamptons," shares a sunset on the beach with one of his love interests in the series, set to start streaming on July 15.
Amazon Studios
By Jennifer Landes

Leaving college life for a summer job, whether at home or at a vacation destination, is a common rite for many young adults. And whether it's returning to a familiar place that is now seen differently or arriving in an alien landscape where new friends might be hard to find, there is inherent stress and drama in it.

That is the overarching premise of "Forever Summer: Hamptons," a new series focused on several college-age friends who grew up on the East End, streaming on Prime Video beginning July 15.

Branding it as a docusoap, the company's announcement for the series never mentions "reality," and there is good reason. Everything about the show to anyone who lives here will seem off, even unreal, a "Hamptons" fantasy, even if it's one focused on locals.

"Welcome to the Hamptons, the summer playground of the rich and famous," a female voice intones in the opening as pretty aerial views of the Montauk Lighthouse, surfers, and mega-mansions fill the multi-paneled screen. As the cliche hangs in the air, there is an abrupt shift, like a needle skipping across a record album, while the voice continues, "where crowds of 'cidiots' with money to burn drive in bumper-to-bumper traffic to come rent our houses, take over our beaches, and pack our restaurants to order overpriced lobster rolls."

With dissension in our midst and hints that a more sensitive treatment of the lives of townies versus those from away is in the offing, eyes and ears open wider. But those words evaporate quickly, easily forgotten as the series gets down to what these shows do best: pretty-people relationship drama and crisis management, all seemingly scripted. The show's executive producer, Aaron Rothman, said not so, describing the docusoap as simply "a fun story about people and their interpersonal stories."

The voice-over belongs to Avery, a Westhampton Beach native and pre-med student, home from Tulane University after her freshman year, and a changed woman. As she rehashes the previous summer with her longtime bestie Emelye, who rejected college to move in with her boyfriend, Hunter, it's clear that Avery has become more serious in the past year and critical of her hometown, setting us up early for some conflict to come.

Next, there is Ilan, a kid back from the University of Michigan with his mother in his ear making sure he does not get lost as he makes his way to the house he's occupying for the summer. She's also on him about his love life, having an unusually open conversation about his bad breakup and whether he's going to have a "hot boy summer" or not. He's cast as the "cidiot" in this show, the outsider coming from the city, or perhaps some New York metro suburb.

What we do learn quickly is that his grandmother is Nita Lowey, who was a congresswoman for many years representing parts of Westchester County. She has a cameo in the show. Mr. Rothman said by email that she was not the reason Ilan was selected. "We loved seeing his grandparents on camera. They were really charming and thoughtful."

The geography of the show is strange. The cast comes from two main locations, Westhampton Beach and Sag Harbor, with a few outliers, though Sag Harbor barely makes an appearance. They meet up in several undisclosed locations: preplanned beach bonfires on the bay, Ilan's house -- a five-bedroom that he occupies alone -- and "parties" on boats, the beach, or at Southampton Village restaurants that more closely resemble clubs once dinner service is over.

In the daytime, they come together at Dockers in East Quogue, which is where Avery has worked for a couple of summers. Reid, her friend from Westhampton, is there, as well as Habs, who was adopted from Ethiopia by white parents and grew up in Sag Harbor, Frankie from East Hampton (commuting to East Quogue?), and Ilan, the one who may or may not be from the city and whose summer address is ill-defined as well.

Dockers is how Ilan enters the picture. The crew from Sag Harbor -- Shannon, Lotte, and Milo -- are people Avery met at a New York City party. Juliet is good friends with Reid, who is a known troublemaker, and Milo is someone Reid hooked up with at an earlier party.

Each of the eight episodes has some kind of main gathering with smaller groups of people meeting up for expensive lunches, dinners, and snacks to chat about the event and its dramatic elements before and/or after. Although these townies are mostly well off (Hunter drives an Audi sedan and everyone appears well dressed and shod), it's hard to imagine they can all afford to throw parties at Blu Mar and Southampton Social Club and regularly eat the same "overpriced lobster rolls" and sushi they mock in the beginning, along with shopping on Main Street. (Of course the promotional value the restaurants receive in return for not charging the guests or the production is understood, but it's distracting nonetheless, and belies the us-versus-them theme established at the start.)

The overheated macho dust-ups are no more believable than the heart-to-heart chats the guys have about their crushes and likes on the show. The girls talk too, among themselves and with some of the guys. There are a couple of forced mismatched lunch dates within the group, like a round robin of random meet-ups, maybe for more screen time.

All in all, it feels like it was a challenge to find enough footage for an eight-episode arc. And the sometimes-compelling back stories shown in the first few episodes and leaked out from time to time in the remaining ones are never fleshed out, leaving a hole in the center of a composite of banal East End memes.

Some of the "will they, won't they" tension works for potential couples, creating intrigue. But much of the cast's interaction feels overplayed for manufactured tension or manipulated to create staged surprises, leaving a stale taste long after August.