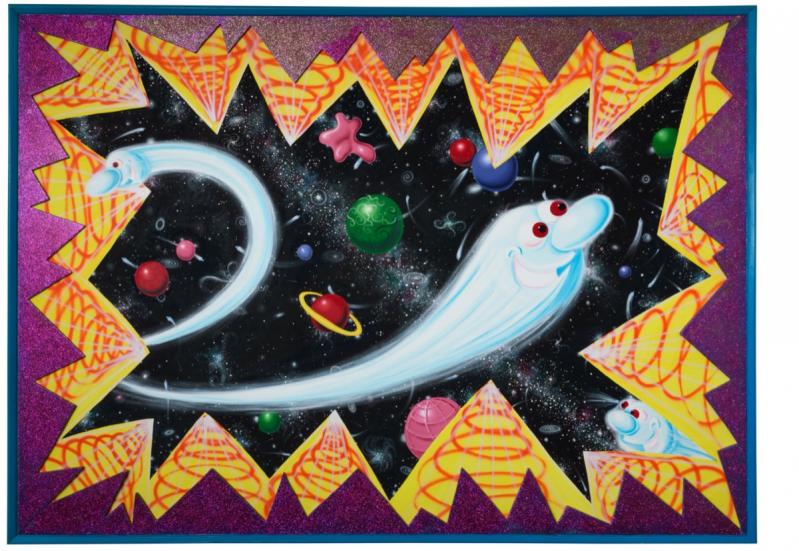 Kenny Scharf's "Cometa Festa D’Halley," from 1986, is part of a new exhibition at Phillips in Southampton.
Via Phillips
By Jennifer Landes

Although Kenny Scharf was initially associated with the downtown art scene of the 1980s and now lives and works in Los Angeles, he has made his mark here through the cars he painted in his signature "psychedelic conceptualism," the giant mural painted on a local wall, or through group shows at Eric Firestone's East Hampton gallery.

Beginning Friday, his work will take over the Southampton gallery of the Phillips auction house for a private selling and "experiential" exhibition, "Cosmic Summer: Works by Kenny Scharf."

The show, with its high-energy animation, has a lighthearted feel appropriate and encouraging for a summer when we're still trying out life away from our safe havens.

As if the color and dynamic mood of his graffiti weren't enough, "the Southampton space will be transformed to embody the lively and colorful nature of Scharf as an artist, with weekend events, including a cosmic bar offering refreshing alcoholic and non-alcoholic themed beverages every Saturday throughout the exhibition," promises Phillips.

Mr. Scharf was born in L.A. and attended the School of Visual Arts in Manhattan. Known for his "visual vocabulary of colorful, lively globular figures," he executes them in spray paint on whatever is handy: cars, walls, even canvas. He first came to prominence as a street artist and protege of Andy Warhol along with Keith Haring and Jean-Michel Basquiat.

His inclusion in the 1985 Whitney Biennial marked his arrival on the international scene, and he hasn't stopped exhibiting since then. A documentary, "Kenny Scharf: When Worlds Collide," was released last year, when he also collaborated with Dior for their fall 2021 collection.

The exhibition will be open every day through the end of July.