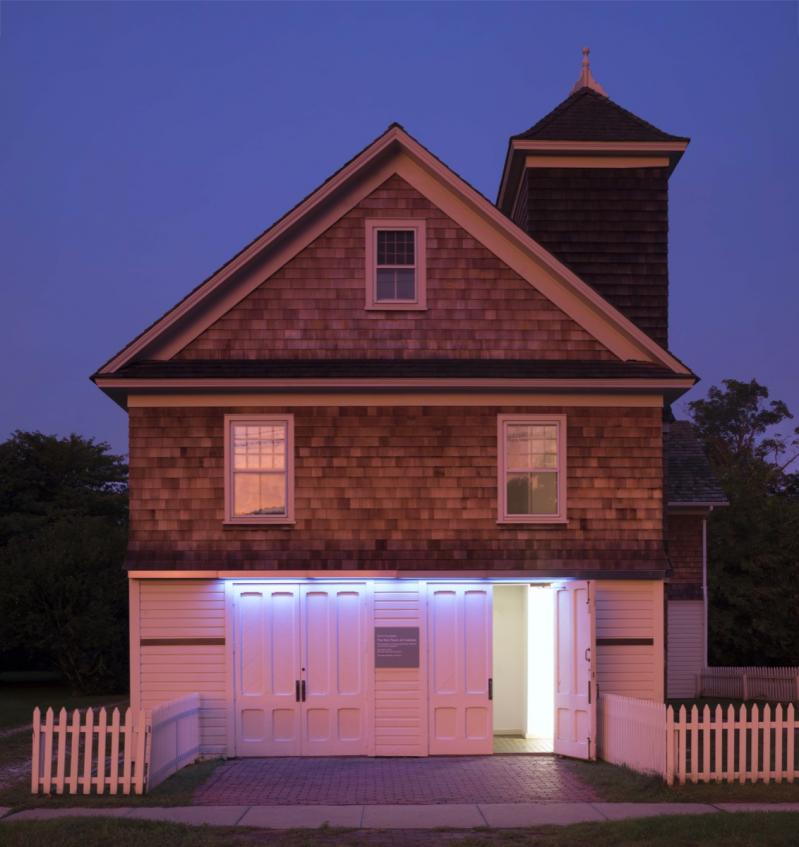 Dia Bridgehampton will open its 2022 exhibition on Friday, featuring sculptures by Leslie Hewitt placed both within and outside the gallery's walls.

The low-profile works, conceived for the site, explore "ideas of light, sound, and inertia." A score for the installation, composed with Jamal Cyrus, will be played in performances both at Dia's space in the city and in Bridgehampton by Rashida Bumbray-Shabazz, Jason Moran, and Immanuel Wilkins.

According to Dia, "Collectively the sculptures in situ, the score, and the distributed performances form a counter-archive that puts forth an alternative corporeal, spatial, and sonic mapping of Dia Bridgehampton."

The bronze sculptures in the gallery's interior reference three major bodies of water on the South Fork: Mecox, Peconic, and Shinnecock Bays. The fourth sculpture, placed outside, is composed of a boulder found here, with a "matte bronze silhouette" on top and pointed skyward.

The score will be shown on a monitor with a scrolled image of metadata in the room with the sculptures. Nearby, found objects, a wood tambourine and an iridescent shell, are set against a black velvet background.

"The artists thus use the indeterminate logic of Fluxus notations and the fractal nature of jazz to explore the ways experimental music and the Black radical tradition of political resistance intersect with the elemental sounds, patterns, and breaks of the ocean as it meets the shore," the Dia release said.

"These new works by Hewitt extend Dia Bridgehampton's longstanding engagement with the histories of its immediate site and surrounding geographies," said Jessica Morgan, Dia's director. "With remarkable restraint, Hewitt simultaneously evokes the vastness of the landscape as well as the ways in which histories are made through the ebb and flow of day-to-day life over time."

Ms. Hewitt, who also works in photography, has a Post-Minimalist aesthetic influenced by the original artists who worked in Minimalism at the same time as the civil rights movement. Her work also references film theory and the genre of still life. Her "spare assemblages of ordinary materials and personal effects" suggest "the porosity between intimate and sociopolitical histories," according to Dia.

Matilde Guidelli-Guidi, the curator of the show, noted that inherent in Dia's building is its former history as a church and firehouse, which Dan Flavin memorialized when transforming it into an exhibition space for work by him and others. "The material memory of the building is an invitation to history that Hewitt takes on in this new body of work, acknowledging the land on which it rests and tuning our senses to silenced pasts and the magnitude of geological formations," she said.

Also accompanying the show will be a lecture by Tiffany Lethabo King, the author of "The Black Shoals: Offshore Formations of Black and Native Studies." Dates for the lecture and performances will be announced soon.

The exhibition will remain on view through June 5, 2023.