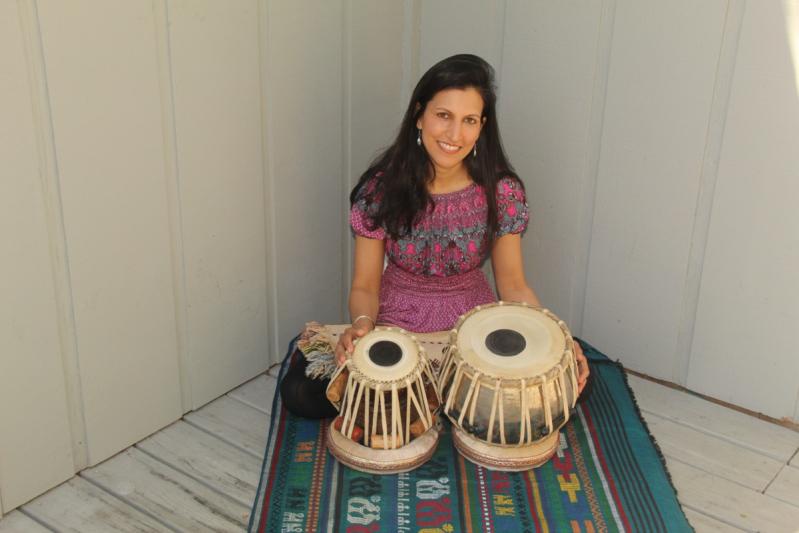 Sejal Kukadia is one of very few female exponents of the tabla, a pair of hand drums and the principal percussion instrument of Hindustani classical music.
Durell Godfrey
By Christopher Walsh

More than a few musicians reside on the South Fork, from those in the surfeit of bar bands covering classic rock staples to the authors of some of that very catalog. But very few, if any, are like Sejal Kukadia of East Hampton.

Ms. Kukadia, a native of suburban Albany, is one of very few female exponents of the tabla, a pair of hand drums and the principal percussion instrument of Hindustani classical music, in the United States. She covers all of Long Island for the Taalim School of Indian Music, gives individual and group lessons in East Hampton and Montauk, performs with Divahn, an all-women fusion band out of New York City, and further supports female tabla players via the online platform TablaGirls.

Ms. Kukadia arrived in East Hampton from New Hyde Park in 2020, when the Covid-19 pandemic brought an end to concerts and in-person lessons. "Most of my student base is there because I've been there for more than 10 years," she said. "I was working from home for the most part, so it made sense to come and live here because I didn't have to drive anywhere. I was just teaching virtually for a long time." She now conducts classes in person as well as online, and commutes to New Hyde Park a few times per month.

How did an American woman come to excel in the very male-dominated sphere of the tabla? "I grew up in a household that had a lot of Indian instruments," Ms. Kukadia said. Her parents are from Gujarat, in western India. "They had a strong interest in Indian music, so I had it around me, the instruments -- harmonium, tabla, bansuri flute. I just had an attraction to the tabla because of the sound, I just loved that sound. We would go to Indian classical music concerts locally, and I'd just get really drawn in to the sound of the tabla."

The smaller of the two drums, the daya tabla, is played by the musician's dominant hand and is tuned to a specific note to complement a soloist's melody. It is made of wood. "This makes more of the treble sounds, the more fast sounds as well," Ms. Kukadia said. "That tone is so rich, so full of depth. Even at a young age, that sound was what attracted me to the instrument."

The larger baya tabla is usually made of brass, copper, aluminum, or steel. "This makes a more low, deep, bass tone," she said. "One makes a ringing tone, one a flat, hard tone. The balance of the two is really special."

She took lessons, but the Albany region offered no guru, commonly defined as a spiritual teacher but applicable as well to those imparting the ways of an Indian classical art form. "If you wanted to learn in a really traditional way, you would search for a guru, a proper classical artist, a musician, a full-time instructor. I didn't have that where I was living, I would just take lessons here and there from local tabla players. But my interest really grew -- like, exponentially -- so I decided to search for a teacher, one that I was sure would take me on that road that I wanted to travel on. So I went to India."

That search eventually took Ms. Kukadia to Ahmedabad, the largest city in the state of Gujarat, and Pandit Divyang Vakil ("Pandit" is an honorific for an expert in Indian classical music and used for an Indian musician). She likens the experience to obtaining a master's degree. "When I came upon that teacher, I moved to India to study it full time in an intensive, apprenticeship type of way, like 100-percent tabla, tabla, tabla, practice, practice, practice."

She remained in India for several years before returning to the United States. "By that time I was fully immersed," she said. "Several years later, we started the Taalim School of Indian Music, and it picked up from there. Now we have teachers, many locations, and hundreds and hundreds of students." This year marks the school's 20th anniversary.

Students are concentrated closer to New York City, where there are far more people of South Asian descent. "Also, tabla is not so well known here as it is there," Ms. Kukadia said. But "introducing tabla to non-Indian audiences is especially rewarding because one of my main goals as a teacher is to educate diverse audiences on the depth and beauty of India's music. I strive to help students discover the boundless creative possibilities in tabla, and the expression and purity of its music."

Gian Carlo Feleppa, a composer and multi-instrumentalist who lives in Springs, is one such student. Mr. Feleppa plays the sitar, an Indian stringed instrument also used in Hindustani classical music, during classes at Mandala Yoga Center for Healing Arts in Amagansett, where he met his future teacher.

"It's the best," Mr. Feleppa said. "Indian music was so unusual to me when I first heard it, I couldn't really tell what I was hearing. That led me to listening to Ravi Shankar. Then I discovered Bollywood records." He and Ms. Kukadia met shortly before the pandemic struck, and their first tabla lesson happened in January 2020. "I'm still a student," he said, "and the second I'm feeling pretty good about my playing, I go to a lesson and hear her -- she's ridiculously great."

In March, the Taalim School completed its annual Pledge for Practice initiative, in which students both pledge to practice for a particular time span every day throughout the month and raise money for Indians who want to be musicians but lack the means for lessons, instruments, and the like. The students perform in a recital at the conclusion.

"Of course, pre-pandemic we would have a grand recital," Ms. Kukadia said. "All the students, all the families, tons of music happening. The students would show off the result of that 30 days of practice. But because we couldn't have big gatherings for the past two years, we've been doing it online, and it's just been an amazing response."

"I get blown away by Indian kids," Mr. Feleppa observed of the recitals. "It was amazing to be part of that."

Those interested in studying tabla can go to the contact page at taalim.com, or send an email to [email protected]. Ms. Kukadia will perform with Divahn at the North American Jewish Choral Festival in Stamford, Conn., on July 11 at 9 p.m. She will offer a free tabla workshop at the Amagansett Library on July 28 at 4 p.m.

Many students "have stuck with it year after year," Ms. Kukadia said. "I've seen students grow up." One began lessons at age 11 and is now 25 and performing as well as serving as a kind of assistant teacher. "We've done a lot of performances together. Age 11 to 25 -- I feel like she's my daughter. It's really special to see these students progress, advance, and grow up."