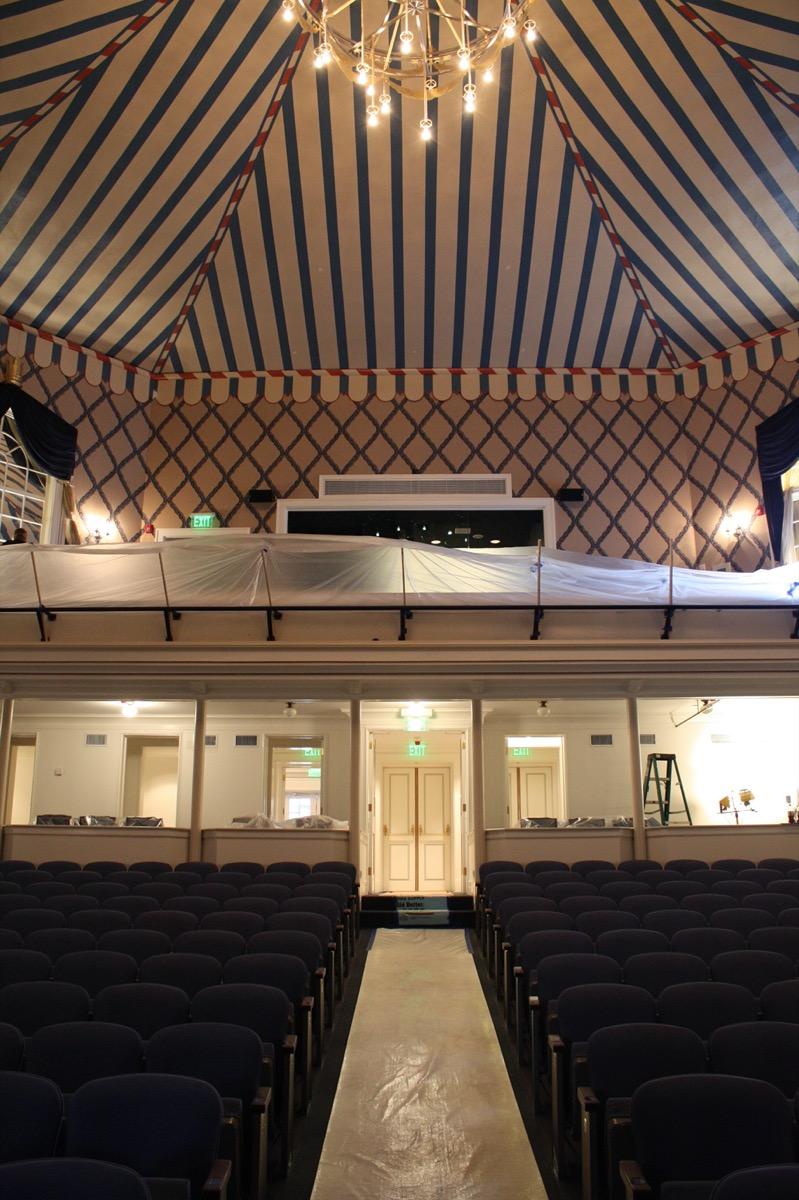 Guild Hall's leadership said they will pause to consider concerns raised about their plans to renovate the theater to a more contemporary style . A photo from 2009 shows the theater during its last update.
<I>Durell Godfrey<P>
By Jennifer Landes

After attracting a measure of controversy, Guild Hall's leadership announced on May 25 that they had decided to pause their theater renovation plans.

The East Hampton arts institution's full plans, as announced in February, are to restore Guild Hall's entryway to its original form, add outdoor seating, and make several changes -- some subtle and some radical -- to its lobby, galleries, theater, educational center, and work spaces. The proposals have been greeted with enthusiasm as well as grave concern about the potential destruction of the historical aspects of the interiors, particularly the John Drew Theater, which had the most dramatic transformation in the renderings.

East Hampton Village's Design Review Board and Zoning Board of Appeals recently approved the application for the changes to the exterior, which allowed Guild Hall to begin construction on its entire renovation. During the hearings and discussion of the application, village officials maintained that they had no jurisdiction over the proposed interior changes.

Andrea Grover, Guild Hall's executive director, and Marty Cohen, the chairman of its board, said in an email, "We have heard the voices of our community, whose passion for Guild Hall is evident and moving, and have taken measure of how we can incorporate the feedback while still accomplishing the vital goal of time-proofing our institution. As such, we have decided to pause and reflect on the upgrades to the John Drew Theater."

They added that the work of updating the building "is time-consuming, complicated, and costly for a small nonprofit, but we know it is important."

The leadership "understands that buildings serve as containers of community memory and history, and physical spaces possess intangible qualities which provide important continuity and value."

They will share their progress "as we reflect on the best way forward for improving the theater and meeting the needs of today's and tomorrow's artists and audiences."

During the celebration of its 90th anniversary last year, Guild Hall began a capital campaign to update its facilities to address the challenges encountered in mounting performances and exhibitions in its spaces. Too-narrow hallways and doorways had limited what could be shown in the galleries, and sophisticated multimedia performances were curtailed by the theater's technological and acoustic limitations, Ms. Grover had said in February in revealing the new plans and in more recent conversations.

The building, which was completed in 1931, had been updated with renovations and restorations to its public and office spaces in a phased five-year schedule that was completed in 2009. But, in conversations with Ms. Grover and the consultants who were hired for the new renovations, they said it was necessary to revisit those upgrades and take them to a new level.

"As a living creative space, modernizations to keep pace with new technologies and standards are a necessary part of our institution's advancement," they said in the email. "Our planned improvements focus on enhancing safety and access, visitor experience, beautification of our landscape, and the physical and technical capabilities of our museum, theater, education center, and office space."

The institution's performances and exhibitions involve more than 22 different artistic disciplines that can "intersect, overlap, and sometimes defy definition," they said.

"Since embarking on the first steps of our plan this spring, we have received both positive and critical responses to our proposal, specifically for the John Drew Theater -- from those who want us to have exceptional facilities for the arts, to those who think we've gone too far with that vision."

Noting the institution's role in the community since its inception, they said they were "proud that Guild Hall is the cultural heart of East Hampton" and proud of its role in showcasing the "community's youngest to its most internationally recognized, often bringing both ends of the spectrum together for education and sharing for a wide range of audiences on the East End."

In a separate letter to the editor published last week, Ms. Grover and Mr. Cohen said they look forward to sharing updates in the near future. "We encourage those who have taken the time to express themselves so passionately to become active members, and help sustain this rare and beloved enterprise as we listen, learn, respond, and evolve."

Mashashimuet Park's History and Future
A Conference for Young People to Create Solutions
Get Outside, Get Moving
END_OF_DOCUMENT_TOKEN_TO_BE_REPLACED