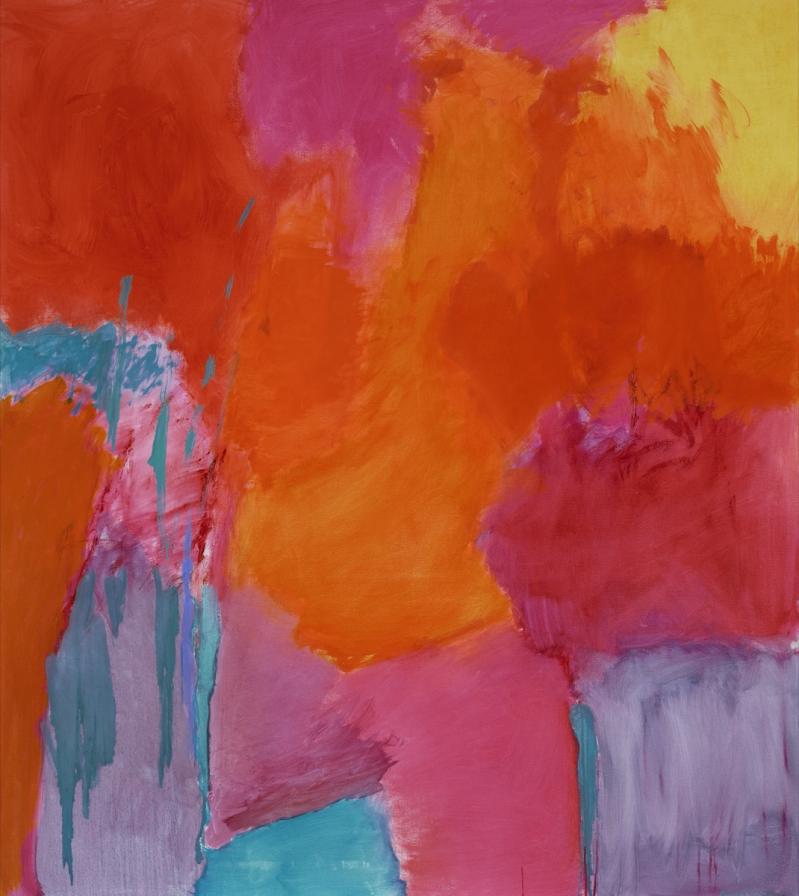 Emily Mason's painting "Renewable" can be seen at Christie's in Southampton.
By Mark Segal

The Power of Color
Christie's Southampton has opened for the summer with "Nature Abstracted: Vivien Springford, Wolf Kahn, and Emily Mason," three American painters for whom the power of color expressed patterns found in nature.

Springford (1913-2003) was active in New York City throughout the second half of the 20th century. Her kaleidoscopic pools of color were inspired in part by Taoist calligraphy and the rhythms of nature.

Kahn (1927-2020) and Mason (1932-2019) were married in 1957 and lived in Vermont and New York. He became known for his combination of realism and Color Field painting, while she responded to Abstract Expressionist painting by diluting oil paint so that it would flow as if it were watercolor.

The exhibition will continue through June 26.

Faith Ringgold in Montauk
"Faith Ringgold: Jazz Stories," an exhibition of recent work organized to complement the artist's current retrospective at the New Museum in New York City, is on view at the South Etna Montauk Foundation through June 25.

The show features five of the artist's "Story Quilts," and includes over 20 drawings, paintings, sculptures, and prints from her "Jazz Stories" series, which focuses on music, specifically her relationship to jazz.

Growing up in Harlem, many of Ms. Ringgold's neighbors were renowned musicians, but the figures in the works in the "Jazz Stories" are anonymous performers situated in fields of wiggling shapes and primary colors that animate the movement of their music.

Pollock as Muse
"Will You Be My Muse for Summer 2022?", an exhibition of paintings by Clintel Steed, will open at the Mark Borghi Gallery in Sag Harbor on Friday and run through June 16. A reception will be held Saturday from 5:30 to 8 p.m.

Mr. Steed, who has often turned to art history for inspiration, chose Jackson Pollock's iconic "Autumn Rhythm," from the Metropolitan Museum of Art, for this show. For the 20 works on view, he analyzed the composition, color, and value of Pollock's style, bringing to it his own impasto painting technique.

"He experiences Pollock's harmonic communication of color like an intimate dance," says the gallery, "one color leading into the next."

A Leiber Celebration
The Leiber Collection in Springs has opened for the summer with two new exhibitions. In the museum galleries, "Judith and Gerson Leiber: A Life of Beauty, Love, and Inspiration" celebrates the artistic legacy of the couple with an installation of Gerson's paintings and Judith's handbags.

New at Keyes Art
Keyes Art in Sag Harbor will open exhibitions of work by Leslee Stradford and Cullen Washington Jr. on Friday, with a reception from 6 to 8 p.m. The show will be on view through July 5.

Dr. Stradford, whose grandfather was a prominent community member in Tulsa at the time of the 1921 Black Wall Street Massacre, has created a series of works based on a collection of family documents and photographs that depict the prosperous lives of African-Americans in that city before the riots.

Mr. Washington will show works from his "Primers" series, which he has called "a record of the history of Black skin, wounded, scarred, and amended." The surfaces of the mixed-media works consist of graphite, charcoal, ground mineral pigments, and ink.

Heaven and the Caymans
"Showings in Four Dimensions," an exhibition of paintings by Elise Ansel and Kyle Hittmeier, will open at AB NY Gallery in East Hampton with a reception Saturday from 6:30 to 8:30 p.m. It will continue through June 28.

Ms. Ansel will be represented by works from her new "Celestial" series, which interprets art history with a visual vocabulary that is gestural, abstract, and conceptual. In her words, "Color is the protagonist  . . . Gesture breathes life into the paintings."

Paintings from Mr. Hittmeier's "Flora of the Cayman Islands" series juxtapose tourist images of that Caribbean destination with configurations of Post-it notes, utilitarian objects that contain fragments of floral imagery, and other abstract elements.

New Springs Venue
HaubrichArt has launched in Springs with "Out of This World," a space-age-inspired show featuring paintings by George Singer, Gus Yero, and John Haubrich, and digital photographs by Christa Maiwald.

The gallery is at 39 Isle of Wight Road, and visits, which are by appointment only, can be arranged by emailing [email protected]. The exhibition will remain on view through June 26.

Totemic Relics
Fairfax Dorn Projects, an interior design collective based in New York City, has launched its second summer in East Hampton with "Eternal Circle," a show of mixed-media works by Lucien Shapiro.

"Green Earth Spell," for example, is composed of cannabis stems and resin on wood, while "Learning to Fly Spirit Totem" features rocks from a fish tank, wooden bowls from Indonesia, mica, quartz, pyrite, and chain.

The show will run through June 26.

Mizrahi in Montauk
"Double Stroke Roll," an exhibition of paintings by Haim Mizrahi, opens Thursday at Lucore Art in Montauk and will continue through June 21. A reception is set for June 11, from 4 to 7 p.m.

The show includes about 15 abstract paintings by the artist, who is also a poet, host of the LTV show "Hello Hello," and a jazz musician. The exhibition's title "represents a rhythm upon which the abstract idea creates roots and brings a zone of comfort of composition into place," says Mr. Mizrahi.

On Montauk's Green
The Montauk Artists' Association will hold its annual Show on the Green tomorrow from noon to 6 p.m. and Saturday and Sunday from 10 to 6. The exhibition will feature work in a variety of mediums by more than 60 artists, photographers, and artisans.

A Conference for Young People to Create Solutions
Get Outside, Get Moving
Two Traditions, One Fair in Springs
END_OF_DOCUMENT_TOKEN_TO_BE_REPLACED