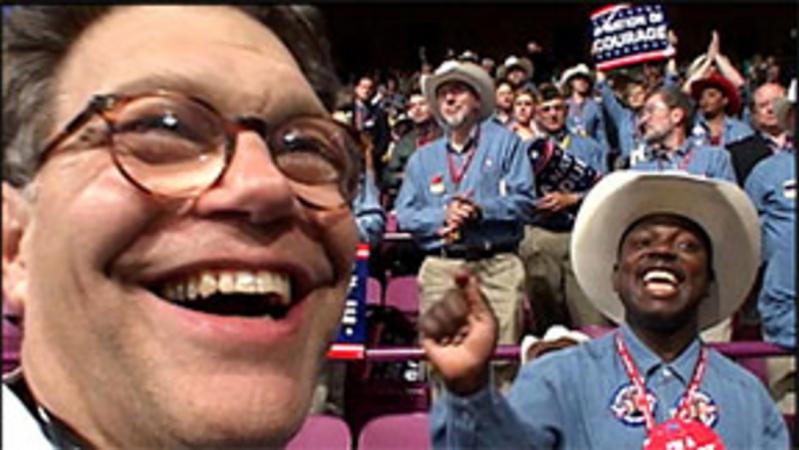 Al Franken will be at the Sag Harbor Cinema for a screening of "Al Franken: God Spoke," directed by Chris Hegedus and Nick Doob.
By Mark Segal

Al Franken and Andy Warhol are not likely to be found in the same sentence, but both are the subjects of documentaries coming up at the Sag Harbor Cinema.

The comedian, writer, and former United States Senator from Minnesota will touch down at the cinema on Saturday at 6 p.m. for a screening of "Al Franken: God Spoke," a 2006 documentary by Chris Hegedus and Nick Doob. The film concludes a year-long retrospective devoted to the work of D.A. Pennebaker and Ms. Hegedus.

From his U.S.O. tour in Iraq to the studios of the liberal radio network Air America, the film follows Mr. Franken's transformation from comedian to political activist, and features appearances by a broad spectrum of pundits and politicians, from Michael Moore and Al Gore to Ann Coulter and Sean Hannity.

The screening will be followed by a discussion among Mr. Franken, Ms. Hegedus, and Giulia D'Agnolo Vallan, the cinema's artistic director.

"Andy Warhol," Lana Jokel's 1972 documentary, will be shown on Monday at 7 p.m., after which Ms. D'Agnolo Vallan will discuss the film with Ms. Jokel and two close confidants of Warhol, Vincent and Shelly Fremont. In addition to working with Warhol at his Factory for 20 years, Mr. Fremont has also managed the artist's artistic legacy since his death in 1987.

The film shows Warhol at his most talkative, as he discusses life, society, money, and art. Informal scenes with the artist alternate with interviews, including exchanges with Philip Johnson and Barbara Rose, and insights from friends and coworkers.

Ms. Jokel began her film career as an editor with Mr. Pennebaker, and subsequently cut Norman Mailer's "Maidstone" and Warhol's "Heat" before making her own films. Her many documentary subjects have included Claes Oldenburg, Larry Rivers, Elizabeth Strong-Cuevas, and Keith Sonnier.

Tickets to each film are $15, $12 for senior citizens, people with disabilities, and those 12 and under.