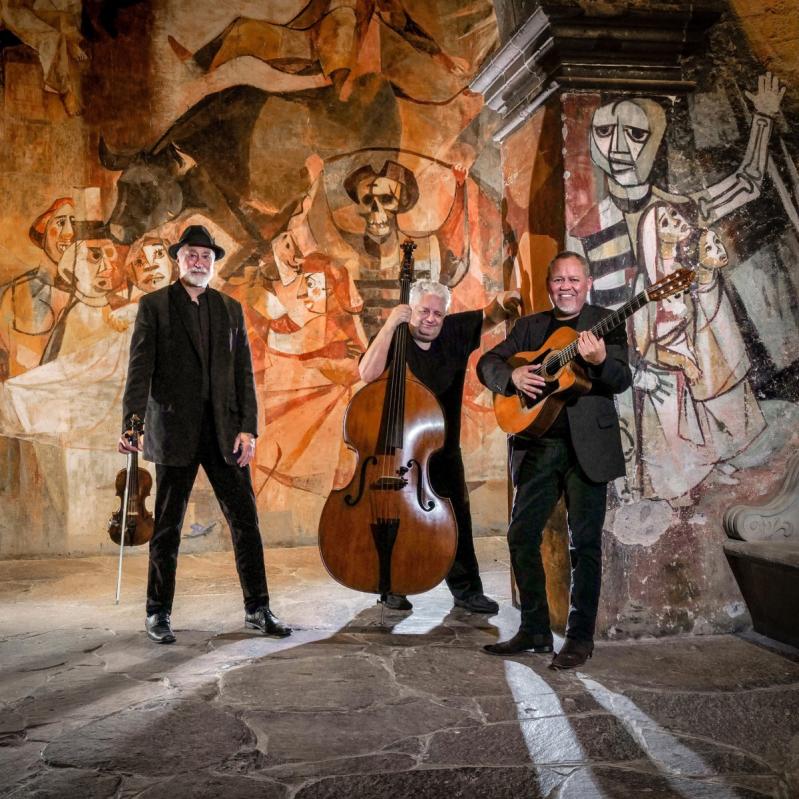 The Gil Gutierrez Trio will perform at the Montauk Library and The Church in Sag Harbor this weekend.
John Kisch
By Mark Segal

Gil Gutierrez, Twice
Gil Gutierrez, a guitarist and composer, was discovered while playing in a restaurant in San Miguel de Allende, Mexico, by Doc Severinsen, who led the NBC Orchestra on Johnny Carson's "Tonight Show" for 20 years. It was the launch of a career that has taken Mr. Gutierrez to more than 60 concert venues worldwide.

Next on his itinerary are the Montauk Library, tomorrow at 7 p.m., and The Church in Sag Harbor, on Saturday at 6:30. Mr. Gutierrez will be accompanied by Robert Stern, a violinist, and David Rodriguez, a bassist and Montauk resident.

Mr. Gutierrez has a following throughout Latin America, the United States, and Spain for his compositions and performances. The Montauk concert is free; admission to The Church is $30.

Jazz for Families—POSTPONED DUE TO INCLEMENT WEATHER
The Arts Center at Duck Creek will open its 2022 music series on Saturday with a new curator, Kalia Vandever, a composer and trombonist; and a free Jazz Education Family Concert by Ms. Vandever and her quintet. The interactive free concert, which will start at 5 p.m., will introduce families to the work of artists ranging from Ella Fitzgerald to Ornette Coleman.

Ms. Vandever has released two albums and performed at Carnegie Hall, the Sydney Opera house, the Walt Disney Concert Hall, the Blue Note, and the Hollywood Bowl, among many other venues. She has appeared on "Saturday Night Live" with Demi Lovato and on Samantha Bee's "Full Frontal" with Lizzo.

Feiffer and Popeye
It is not surprising to learn that Jules Feiffer began producing sketches of Popeye and other cartoon figures at the age of 5, but it is perhaps less widely known that he also wrote the screenplay for Robert Altman's 1980 musical comedy "Popeye."

The Sag Harbor Cinema and Keyes Art will join forces to honor Mr. Feiffer on Saturday, starting at 4 p.m. with a screening of the film, which starred Robin Williams and Shelly Duvall as Popeye and Olive Oyl. Mr. Feiffer will be on hand, and a discussion moderated by Giulia D'Agnolo Vallan, the cinema's artistic director, will follow.

"Feiffer the Sailor Man" will move to the gallery at 6:30 for a one-night exhibition and reception that will include some of Mr. Feiffer's early sketches of Popeye as well as drawings inspired by the Hollywood musicals of the 1930s, '40s, and '50s.

Rising Stars and More
Things are heating up at the Southampton Cultural Center. Its Rising Stars Piano Series will return on Saturday at 6 p.m. with a concert by Albert Cano Smit, a Spanish-Dutch pianist. The first-prize winner of the 2019 Young Concert Artist International Auditions, Mr. Smith has performed in China, France, Germany, and throughout Spain, as well as in the United States. Tickets are $20.

The cultural center's free 2022 Concerts in the Park series will kick off on Sunday at 5:30 p.m. with a performance by Nancy Atlas in Agawam Park. Subsequent programs, most of which will take place on Wednesday evenings, will feature the Pat Benatar Tribute Band, Melissa Errico, the Lone Sharks, and the John Fogarty Project, among others.

Outdoor Concert
The Custer Observatory in Southold will be the site of "New Music Under the Big Sky," an outdoor concert by the Rites of Spring Ensemble, on Saturday at 7 p.m.

Based on the East End, the ensemble's mission is to create and perform music in unconventional locations, to combine music with natural environments and history, and to collaborate with like-minded artists, performers, and thinkers. The group consists of Iva Casian-Lakos, cello; Dan Lippell, electric guitar; Dan Pate, percussion, and Paolo Bartolani, piano and synthesizer.

Weather permitting, guided tours of the night sky by observatory staff will follow the concert. Tickets are $45, $35 for observatory members, free for children under 16. June 4 is the rain date.