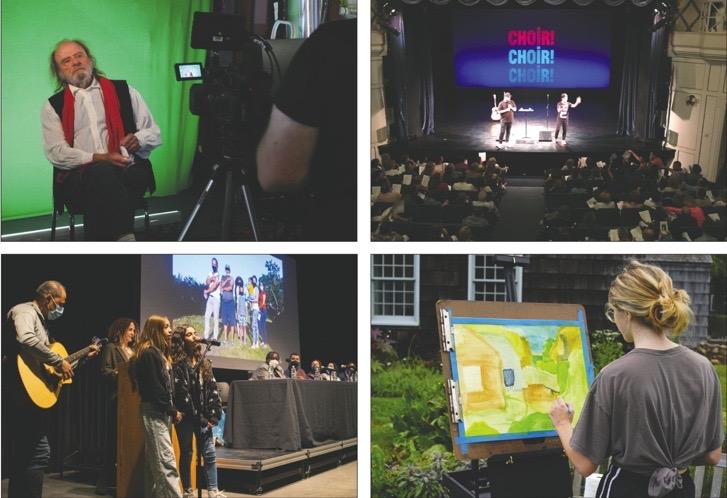 What once seemed like a stopgap measure to keep audiences engaged and occupied during the pandemic has become a permanent programming feature for cultural institutions on the South Fork. These include, clockwise from top left, Bay Street Theater, Guild Hall, the Southampton History Museum, and the Parrish Art Museum.
David Kolodny, Joe Brondo, Connor Flanagan, and Victor Miranda Photos
By Jennifer Landes

While everyone has emerged in one way or another from the home confinement brought on by the early days of Covid-19, it has changed the way we do things, maybe even permanently.

As galleries and theaters reopened, tentatively, and then fully, many patrons have flocked to their doors, whatever the requirements. But seasonal outbreak spikes and high-risk factors leave many others cautious. They still want the streaming options offered by those same places during the shutdown.

Arts organizations are also reluctant to give up the national and even international exposure their programs have achieved in audience numbers often exponentially larger than their onsite capacity.

In speaking to representatives of several South Fork cultural organizations, it was clear that virtual programming is here to stay in some form.

At East Hampton's Guild Hall, which will be closed for the season as it renovates its building, digital presentations will often take the place of live events, but even when in-person events are held off premises, they will likely be documented and shared digitally, "as much as the artists allow," according to Joe Brondo, who directs digital content there.

The effort is "both to reach a larger audience and to archive these great moments in the arts. . . . Much of our focus will be on live and in-person experiences, but we will be capturing as much as we can and sharing those moments digitally."

Popular programs, such as the Stirring the Pot series and Choir Choir Choir, will be streamed live. Some interviews and talks will be released in podcast form. "Almost everything will be documented on film this year, and much of it will be released in some capacity -- whether it is the entire program or clips is to be determined." These will be available on Guild Hall's YouTube channel.

Bran Ferren, a consultant for the theater redesign, has made offsite accessibility central in his recommendations for new technology and acoustics for the space. In a February discussion, he predicted that younger generations and those to come will want and expect access to performances via their phones and tablets no matter where they live or where the performances are.

At Bay Street Theater in Sag Harbor, Michael Pintauro recalled that back in 2020 the staff was "pretty quick out of the gate" with virtual programs. As they began canceling their March schedule, then April, May, and then the rest of the year, they brainstormed on what they could offer.

"Even as we were still trying to go day by day and making those decisions, we started with our first Sip and Sing online sing-along the last week of March." Although 1,000 miles away in Florida, Valerie diLorenzo, a performer and singing coach here, agreed to lead it, and "through this new platform that I was only just becoming more familiar with, we were able to make it work pretty fluidly." The first night, more than 300 people logged on. They came back week after week, eventually joining Kyle Barisich, who became the regular host.

He brought on people from Broadway who had won Tony Awards and had appeared in "Wicked" and "Hamilton." The gig gave performers access to audiences and a means of income and "was just a lot of fun," Mr. Pintauro said. "And now it's still going on from week to week, with the exception of a couple of weeks off here and there, with Kyle as the regular host. We still get terrific special guests."

The theater's 2020 summer gala morphed into a kitschy telethon-style variety show hosted by Richard Kind, with "one act and one special guest after another supporting Bay Street and driving donations. It led to some amazing performances throughout the evening." Through that event, the staff gained a better technical understanding of how to put on those kinds of shows.

An eight-part talk show followed, as did "Moby-Dick" performed with the actors "recording from their homes using setups they built themselves," Mr. Pintauro said. It left Bay Street with an archive unimagined before the pandemic. Ticketholders to streamed events could experience something live and others could watch it later for a donation or even for free. This wasn't done much prior to Covid. Once a live performance happened, it was gone. Even more virtual events, classes, and camps followed.

Sip and Sing isn't going anywhere, but, he said, with the theater open it's time to get back to the theater's mission -- in-person events -- both in season and beyond. Streaming has become "a balancing act of effort and manpower." A virtual event still requires the same lighting and sound design attention of a live event, plus additional technical skill and editing.

"When you are approaching the prospect of a project and asking yourself whether you want to commit to it online or in person, you have to be realistic about what sort of audience you can get online, despite the geographical openness of it, compared to the audience that you're able to garner with in-person productions," Mr. Pintauro said. "We're back to 2019 in terms of programs."

Whether that means filmed productions for streaming live or later will be decided on a case-by-case basis. The intimate setting of Bay Street could make cameras intrusive.

At the Parrish Art Museum in Water Mill, Corinne Erni, the senior curator of special projects, said they had settled on a mostly hybrid model in which the event has a live audience and a streaming option. They, too, have found that streaming has expanded their reach, mostly to the city but also internationally, and they will keep doing it. "It's now perhaps more of a marketing tool" to bring people into the museum, she said. "It's really enlarging audiences."

When the Parrish first brought back the Salon Series, classical musicians played in the museum but the audience watched from home. Then the outdoor concerts could be experienced there or online. This year, "we really felt like it's time to be together in the space again. We can do this really safely," Ms. Erni said. They have stopped streaming their music programs because "we felt it's just not the same experience. There's also a real Zoom fatigue that has set in. People really want to go to places in person."

The museum is also using the technology to bring people from outside the area, such as a director of a film being screened, into the theater for a discussion. "That is amazing, that they don't have to travel all the way to the Parrish, and we can still have the Q and A. It has really opened up a lot of many different avenues and additional ways of building an audience."

The Sag Harbor Cinema has also been relying on virtual tech to bring in speakers remotely after film screenings.

Connor Flanagan, the assistant director of the Southampton History Museum, agreed that Covid-era technology has expanded the programming there to include authors and experts from outside the area who no longer need to be on the South Fork to be presenters.

He noted that the audience -- like any history museum's -- "skews older," but the pandemic has made them much more adept at technology as the months have passed. Although the museum has opened up its galleries and has a number of in-person events planned, there will continue to be webinars for patrons who may not want to come to the museum or are otherwise incapacitated.

While most of the museum's videos are viewed around 100 to 200 times, its YouTube channel in total has attracted thousands of views, with some videos in a series on Southampton's "Gilded Age" having more than 20,000 views. Even 100 people are far more than can fit into a lecture held at the museum. Oddly enough, California is the state with the most views of those videos, higher than New York, which is second. There has been a decent share of international viewers as well, with 4 percent from Canada, 3 percent from the United Kingdom, and 1.5 percent from Australia.

Of the institutions on the South Fork, the museum has one of the highest YouTube subscriber rates, more than 1,700. This grants it a branded YouTube URL and access to ad revenue (after 1,000). The staff has been posting videos weekly for the past two years to build the audience but will shift to a less prolific pace and focus more on quality.

Similarly, Mr. Brondo said, Guild Hall's YouTube channel wasn't a major focus before the pandemic, but since then the camera equipment and microphones have been upgraded and the digital storage and speed have been increased to accommodate higher-quality content. "We've invested in technology and in enhancing the skill set of our staff in capturing these moments." He said the challenges are many, "but we're managing them quite well."