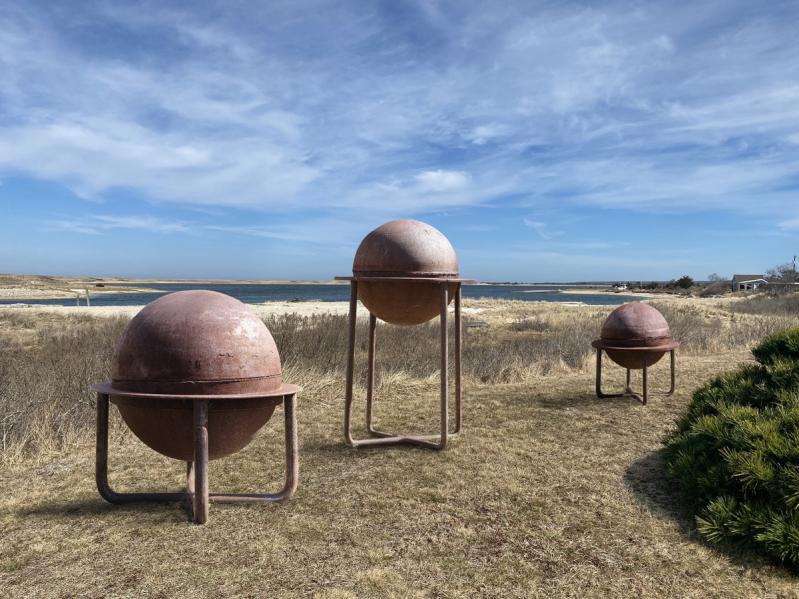 Brian Gaman's "Untitled (globes)," from 1987, will be on view at the D'Amico Studio and Archive at Lazy Point.
Janet Goleas
By Mark Segal

Ms. Bartley is well known for her photographs, which explore the tactile and formal qualities of the printed book. Over the years she has mined the still life genre to create a body of work rich in metaphor and compositional rigor.

Her sensibility has infused other subjects as well. Her recent series "7 Things Again and Again" included a coffee mug, a bottle, a roll of toilet paper, and other objects, as well as a book.

Site-Specific on Lazy Point
The D'Amico Studio and Archive will open for the season on Sunday with "Fieldwork: 8 Artists at Lazy Point," with a reception from 4 to 6 p.m. The site is the former home of Mabel and Victor D'Amico, artist-teachers whose legacy includes the Art Barge on Napeague.

The exhibition there has been organized by Janet Goleas, an artist, writer, and curator, who invited each artist to create works in dialogue with the property, addressing its natural character, its history, and the vision of its founders.

The exhibition, which will be on view through Sept. 4, will include works by Louise Eastman, Brian Gaman, Alice Hope, Chris Lidrbauch, Curtis Mitchell, Aya Miyatake, Michael Rosch, and Bonnie Rychlak.

Water Talks
The Church in Sag Harbor will host two programs featuring artists from its current exhibition, "Empire of Water." Its Insight Sundays series, in which artists discuss their practice in front of one of their own works of art, will feature Linda K. Alpern and Jeremy Dennis, at 10:30 a.m.

Primarily a portrait photographer, Ms. Alpern has often been drawn to water as a reflective and at times mutable environment for her human subjects. Mr. Dennis, a member of the Shinnecock Indian Nation, explores indigenous identity, culture, and assimilation in staged, supernatural photographs.

A roundtable discussion will take place next Thursday at 6 p.m. with Scott Bluedorn, Cy Keener, and Steve Miller. Sara Cochran, the exhibition's curator, will moderate.

Tickets for each program are $15.

"BIPOC Experience"
The Southampton African American Museum will open for the season with "BIPOC Experience," a group exhibition organized by Jeremy Dennis, with a reception on Saturday from 5 to 7:30 p.m.

The theme of the show is the expression of hair, which is inspired in part by the fact that the museum is on the site of a longtime African-American barbershop and gathering place.

The exhibition will run through July 3. Museum hours are Friday to Sunday, 11 a.m. to 5 p.m.

A Bold Female Gaze
"What are you looking at?," an exhibition of paintings by Maureen Dougherty, will be on view at the Mark Borghi Gallery in Sag Harbor from Friday through June 2, with a reception set for Saturday from 5:30 to 8 p.m.

More Techspressionism
In connection with the Southampton Arts Center's current exhibition, "Techspressionism: Digital and Beyond," Christine Sciulli, whose immersive installations blend projected light and geometry, will discuss her work at the arts center on Sunday at 3 p.m.

In the fall, Ms. Sciulli's work will be part of the "HYPERsculptures" exhibition at the Center for International Light Art in Unna, Germany. Tickets are $15, $10 for members.

The next virtual Techspressionism Salon, set for Wednesday at 5:30 p.m., will be moderated by Steve Miller, whose work is included in the exhibition.

Better Late Than Never
Arthur Pinajian began his career as a self-taught cartoonist, but after World War II he attended the Art Students League and committed himself to a career as a painter, first in Woodstock, N.Y., and then, from 1973 to his death in 1999, in Bellport.

Despite a large body of work, he was virtually unknown until 2007, when the buyers of his house found a treasure trove of his paintings in the garage. Peter Hastings Falk, an art historian and curator, has since valued the works at $30 million.

A solo exhibition of Pinajian's paintings will open on Saturday at the J. Mackey Gallery in East Hampton, with a reception from 6 to 8 p.m., and continue through June 26. It will include 30 works, many of which place the artist, according to Mr. Falk, within the context of Abstract Expressionism.

Kadish at Firestone
"Reuben Kadish: Earth Mothers," a survey of work by the important postwar American sculptor and painter, is on view at the Eric Firestone Gallery on Great Jones Street in Manhattan through July 9.

Kadish's family moved to Los Angeles in 1920, and he met Jackson Pollock and Philip Guston while in high school there. Both remained lifelong friends.

New Parrish Trustees
The Parrish Art Museum in Water Mill has elected Louis K. Meisel, Larry Milstein, and George Wells to its board of trustees.

Mr. Milstein is a co-founder of PRZM, a consultancy that works with Fortune 500 brands and nonprofits to engage next-gen audiences. In 2018 he launched the Parrish's Midsummer Gala "Late Night" Party and in 2021 led the formation of its NEXT council.

Founding C.E.O. of Wells Group of New York, a financial consulting firm, Mr. Wells was instrumental in introducing Mickalene Thomas and Racquel Chevremont to the museum, which led to their development of the upcoming exhibition, "Set It Off," which is announced elsewhere in this section.

This article has been modified from its original and print version. The Reuben Kadish exhibition is at the Eric Firestone Gallery on Great Jones Street in Manhattan, not in Chelsea, as originally reported.

Mashashimuet Park's History and Future
A Conference for Young People to Create Solutions
Get Outside, Get Moving
END_OF_DOCUMENT_TOKEN_TO_BE_REPLACED