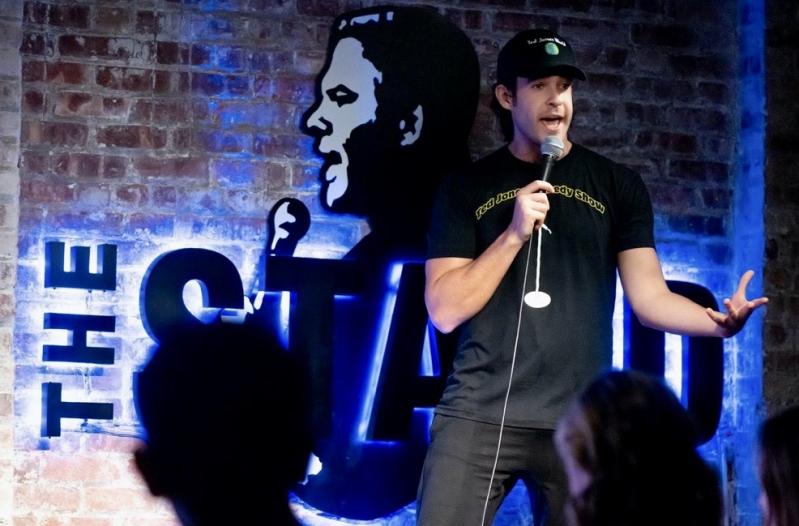 Sorry, but we have to go there. This is a story about a stand-up comic, after all. And -- um -- punch lines and slapstick, so it's simply impossible to not mention the most hot-button cultural issue of the moment.

"Okay, so who's with Team Chris? Hands up team Chris Rock?" Ted Jones asked an audience of about 30 people on March 29 at the Stand Comedy Club in Manhattan. Most hands were raised. "And who's with Team Will?"

One hand gingerly went up.

"Ooooh. Alright. Guess I'm not getting smacked the [expletive] out of my face tonight," said the comic, firing on all cylinders, as is his onstage vibe.

The stand-up stage is, of course, where solo performers get to chew on real-life moments and then spit them out as comedy. And Mr. Jones (his stage name), a 30-year-old from New York City and a lifelong East Hampton weekender, is a rising newcomer on the New York comedy scene. He's a born entertainer, who curates and hosts regular shows featuring five to seven comedians who offer a variety of humor and schticks. During his opening segments and when introducing his lineup, he bounds around the stage, energetically dipping in and out of political and cultural minefields, with infectious chatter about the minutiae of 20 and 30-something life: online dating, vegan diets, TikTok, vlogging, hookup sex, nontraditional careers, and keeping the parents happy. With energy that rarely lets up from start to finish, Mr. Jones seems to be aiming to arrive at a payoff by way of striking the right balance of the relatable and the insightful. For the most part, his shows are full of quick wit, profane punchlines, and lots of laughs.

There's been a lot of recent debate about comedy audiences being too easily offended these days, unwilling to laugh at anything that upends a moral hornet's nest. Has Mr. Jones ever been threatened by an audience member who was offended by something he said?

"Not like that," he said, referring to The Slap (Will Smith's much-talked about reaction to Chris Rock's Oscar-night joke about his wife). "People have yelled back at me from the crowd, sure, but never anyone coming up onstage. I like to think that my comedy isn't trying to be so controversial that I can't straddle the line."

No path to a punchline is ever straight. In 2019, The New York Times ran a series called "It's Never Too Late," which told the stories of people who decided to switch gears, change their lives, and pursue dreams. Mr. Jones could have been one of them. A little over a year ago, he was sitting, in business attire, in an office within his father's real estate investment company, Margules Properties, which boasts a portfolio of over $300 million.

"I wouldn't change anything about my work experience because it really made me hone in on something that I don't want to do," he said during a conversation in Union Square last week. He worked at the family firm for six and a half years, as a property manager, being groomed to one day take over the business.

"It was being served to me on a platter. The trajectory looked great on paper," he said of his potential future as company C.E.O. "It's a safe play. But I found myself just staring at the computer screen, waiting for my dad or somebody at the company to tell me what to do. I did not want to do that. Sitting there, wearing a shirt and tie. . . . I just wanted to create something of my own."

Comedy, and being a live performer, took root early on. As a teenager, he was a prodigiously talented tennis player, who attended the University of Connecticut to play on its men's Division I team. But after two and a half years of spending over 20 hours a week on tennis courts, he had an epiphany. "I'm spending so much time doing this, but for what?" he had asked himself, knowing he would never turn professional. He quit the team, which afforded him the time to take acting, drama, and improv classes.

During that period he also wrote a 118-page movie script titled "A Lost Leaf," which he describes as a fictionalized account of the real-life story of Ryan Leaf, the number two overall pick behind Payton Manning in the 1998 N.F.L. draft. Leaf, who was expected to be every bit as great as Manning, ended up in jail for drugs, before eventually getting his life back on track.

After graduating from college, Mr. Jones took improv classes and also reconnected with a tennis player he knew from his summers at the then-Amagansett Eastside Club, which is Sportime today. Giulio Gallarotti, said Mr. Jones, is someone he considers an inspiration. Mr. Gallarotti played tennis at Boston University and worked in the real estate business before becoming a full-time stand-up comic and finding some success. Around 2015, Mr. Jones joined his family's firm, where he stayed until May 2021, when he broke the news to his parents about pursuing a career as a stand-up.

"I saw that venues were opening up and Broadway was coming back," he said, explaining that he reached out to a theater near his apartment in Chelsea, inquiring about performing stand-up. "Amazingly, they gave me a time slot for later that week so I reached out to like 10 comedians." The show brought in about 65 people, he said, and marked the beginning of a regular circuit of performing stand-up in Manhattan venues. He has also cultivated his Ted Jones World brand, publishing his (very good) twice-weekly podcasts, and a vlog, in which a videographer follows him around New York City as he goes about life as a vegan with a funny bone.

What he aspires to is landing a Netflix stand-up comedy special, as well as to showcase his funny talents in East End venues such as the Clubhouse, the Stephen Talkhouse, or at Bay Street Theater's All Star Comedy Show.

In these times of geopolitical tumult and awfulness, we're more in need of escapism than ever before. And a good stand-up set can be a really powerful thing, allowing us to focus on the things that are utterly stupid and irrelevant. We might leave work exhausted and in a glowering mood, but within 10 minutes we could be hysterically laughing.

A Conference for Young People to Create Solutions
Get Outside, Get Moving
Two Traditions, One Fair in Springs
END_OF_DOCUMENT_TOKEN_TO_BE_REPLACED