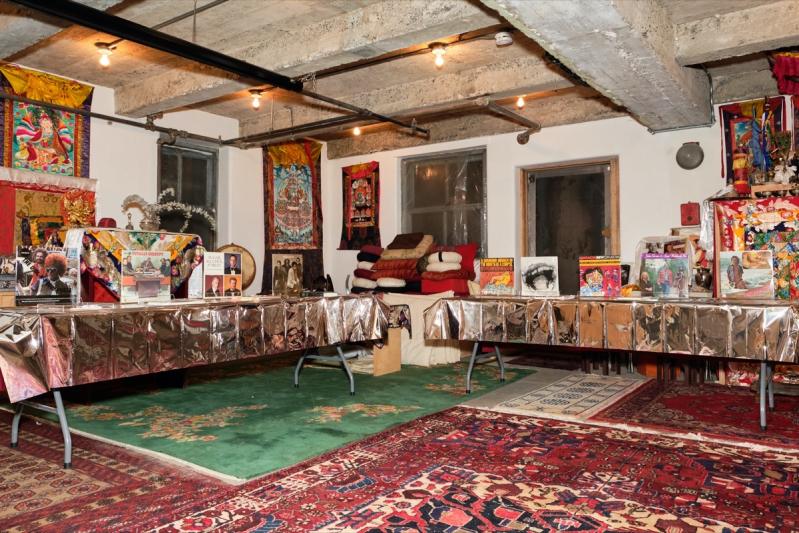 The Bunker at 222 Bowery, home of John Giorno, will be the site of a series of films and other programs inspired by the late poet-artist's cultural milieu.
Don Stahl
By Mark Segal

John Giorno, a poet, performer, visual artist, and practicing Buddhist, had established himself as an important figure on the New York art scene by 1963, when he starred in Andy Warhol’s eight-hour film “Sleep.” He remained a prolific and influential figure until his death in 2019.

While he never lived on the South Fork, two of his bluestone sculptures were installed on the grounds of East Hampton’s LongHouse Reserve in 2021. In 2014, he and the artist Ugo Rondinone, his husband, bought a house overlooking Long Island Sound on the North Fork. Mr. Rondinone, who had a solo show at Guild Hall in 2019, is the president of the John Giorno Foundation, which was established in 2020.

The foundation has announced its first season of programming at the Bunker at 222 Bowery, Giorno’s longtime residence in the city. The series will begin on Monday with a conversation among three young artists, Raque Ford, virgil b/g taylor, and Nora Turato, moderated by Ebony L. Haynes, director of the 52 Walker Gallery.

Future programs, which are scheduled through Aug. 15, will include “Burroughs: The Movie,” a 1983 film about the legendary writer William S. Burroughs; Jack Smith’s notorious and once-banned film, “Flaming Creatures” (1963), a discussion about the late photographer Jimmy DeSana, and Jonas Mekas’s film “Scenes From the Life of Andy Warhol” (1982).

“I’m very fortunate to be working with a foundation with an artist like John Giorno,” said Bill Cournoyer, who organized the programs. “Our mission with the Bunker programs was to bring together living artists as well as the history of the avant-garde and the queer communities in New York.”

The foundation exists to help poets, artists, musicians, and the Nyingma tradition of Tibetan Buddhism, for the benefit, in Giorno’s words, “of all sentient beings.” It will also preserve and promote Giorno’s work and his extensive archives.

In addition to Warhol, Giorno collaborated in the 1960s on projects with Robert Rauschenberg, Bob Moog, and Les Levine. In 1968, he launched perhaps his best-known initiative, Dial-A-Poem, which used a telephone service to communicate poetry in a modern idiom.

“It was unique in that it discovered the telephone as a venue of mass communication,” Giorno said in 2012. After a review in The New York Times in 1969, which included the telephone number, “we received millions of calls . . . If a caller was bored with John Ashbery, they hung up and called again, and got John Cage, William Burroughs, Jim Carroll.” The service is still active in the United States, Mexico, and Britain.

Giorno first moved into 222 Bowery in 1966. Originally a Y.M.C.A., the building became a home and studio for many artists over the years, among them Mark Rothko, Fernand Leger, James Brooks, Michael Goldberg, and Lynda Benglis.

In 1976, Burroughs moved into what had been the Y.M.C.A.’s locker room, which he dubbed the Bunker. When the writer returned to Kansas in 1982, Giorno took over that space, which became his kitchen and meditation room. “It’s such a powerful space, with so much history, and that makes it really special and engaging with the art community in New York,” said Mr. Cournoyer.

In addition to the films and talks, the first weekend of each month, starting Saturday, will feature meditations conducted by the Padmasambhava Buddhist Center, and Iyengar Yoga classes with David Rubeo. Information about those programs can be found at padmasambhava.org and rubeoyoga.com/book-a-class.

Tickets for the Bunker programs are $10 from giornofoundation.org.

This article has been changed from its original and print versions to correct the dates when John Giorno moved into 222 Bowery and when William Burroughs moved into the Bunker.

A Conference for Young People to Create Solutions
Get Outside, Get Moving
Two Traditions, One Fair in Springs
END_OF_DOCUMENT_TOKEN_TO_BE_REPLACED