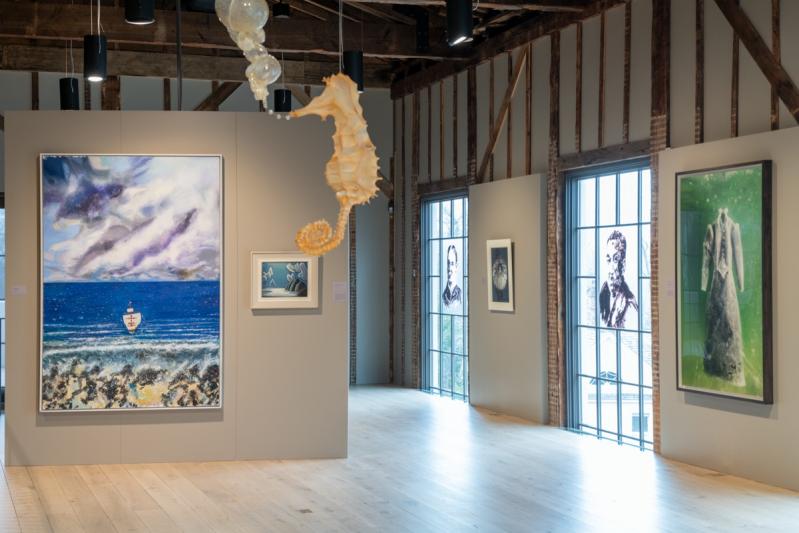 "Empire of Water" at The Church in Sag Harbor is a mix of internationally known artists, local heroes, and those who are both.
Gary Mamay
By Jennifer Landes

Although only a couple of years old, The Church in Sag Harbor has already established itself as a thoughtful and discerning source of exhibitions that explore simple subjects in ways that are unexpected and penetrating.

"Empire of Water," its current show, is an example. Taking the theme of water broadly, it encompasses historically styled seascapes as well as the most contemporary of conceptual explorations, and many things in between, all while giving voice to local artists when applicable.

This broad scope makes for a very satisfying experience in its exploration of theme, while also bringing in artists from all over the world to share in the conversation.

The Church's structure, an actual decommissioned church rooted in a historic whaling community, seems an apt host for what is on display. At the same time, the exhibition addresses a number of themes related to ecology, economics, history, weather, race, and gender.

The earliest two pieces are fiber works in wool, presumably made by mates aboard 19th-century sailing vessels. These historical pieces raise issues similarly emerging from contemporary works in fiber that challenge notions of what separates craft and art, if indeed they are separate, and presumptions that needlework is a primarily feminine occupation and therefore lesser. These two pieces are enough to contemplate all on their own, but the curators, Sara Cochran and Eric Fischl, have amassed another 45 artworks.

The most recent is Cy Keener's site-specific installation in The Church's library, "Montauk Wave Light." The artist, who interprets and reacts to environmental factors through kinetic sculpture, here uses light to demonstrate wave heights and their frequency measured off Montauk by the National Oceanic and Atmospheric Administration and recorded in real time, updated on an hourly basis.

The mechanical device Mr. Keener built functions like a marionette, responsive to pitch and roll. The puppet in this case is a dangling piece that resembles a pared-down model plane. It emits laser light in a line that projects along walls and around the room.

"The goal is that if you come on different days you should be able to experience a different aspect of wave motion," he said while installing the piece in March. "Some of us get a chance to go to the beach and experience it, but a lot of times we are kind of isolated from it. The idea of this piece is to have a better understanding of what's happening out there." The day he was installing it, there was a storm out at sea sending wave heights up to 10 feet. It made for a dramatic presentation.

Mr. Keener isn't the only artist here working in light. The collective teamLab has a digital work called "Waves of Light" on four vertically placed 55-inch monitors. It underlines how light and light waves can be a stand-in for water, much in the way that Jim Campbell's "Topographic Wave II" uses 2,400 LED lights to imply the movement of water.

Aside from water features, sculpture isn't always the first thing that comes to mind when thinking about water and art. Here, quite a few pieces of sculpture or installations employ sculptural elements. Some are so loose as to be amusing, like Conrad Bakker's 2002 "Untitled Project: Fountain," a construction of carved wood painted with oils that resembles a water fountain set on the first floor.

The Duchampian allusions don't end there, either. Liza Lou's "Loo," from 2006, plays with the artist's name and the concept behind Marcel Duchamp's "Fountain," a urinal he displayed in a 1917 exhibition after signing it "R. Mutt" and writing the year in paint. Ms. Lou's loo is a more modern-looking household toilet form she cast in resin and glass beads, which give it a sparkly effect, like something you might see in Vegas or a Texas megachurch.

The two pieces flow between sustenance and elimination, positive and negative space, bounty and the void. Each in its own way brings up environmental concerns of water quality and the negative effects of runoff and wastewater, with consequences keenly felt on nearby bay beaches. Andy Warhol's "Oxidation" canvas, in urine and metallic pigment, works the themes in similar ways, adding his own nod to Duchamp.

Then there are more direct reflections on environmental hazards, such as the devastated industrial landscape of Edward Burtynsky and the "Oil Spill #17" of Daniel Beltra, both C-prints. Duke Riley's salvaged and painted plastic pieces -- bottles, tubes, and other receptacles of modern consumer products -- sit in shadow boxes lined in a watery blue. Covered in a neutral white pigment, the objects have ennobling designs, objects, and portraits painted on them, recalling scrimshaw in their primitive linear grisaille.

One of the least overt sculptures in the space carries the most meaning. Betye Saar's "The Weight of Waiting," from 2014, looks like a scale repurposed as assemblage with a sculpture of a man set on top. Upon further examination, the scale's sides reveal sculpted sailing ships attached with screws. They look as if they may have once been doorstops or bookends. The scale still functions but the weight increments are gone, replaced by a raised pattern that turns out to be a scheme for how slave ships loaded the people they captured on the boats transporting them overseas. On top of the man's hat sits a crow, a symbol of the Jim Crow laws that continued to keep Black people from fully participating in Southern society even after the shackles came off.

There are so many other thoughtfully selected and placed works from all over that merit more attention. This is just a flavor of what the show offers, with Julian Schnabel's massive bronze "Ahab" on the lawn, some unusual Roy Lichtenstein collages, a rare chance to see a significant Anselm Kiefer canvas on the East End, a sizable wave-inspired charcoal by Robert Longo, and so much more to engage with and ponder.

As Mr. Keener hoped, it is a show that delivers more each time it is viewed. It is fortunate to have many chances before it closes on May 30. Additionally, The Church will host a conversation between the two curators on May 8 at 5 p.m. that will include an intimate glimpse of the show in the context of its genesis and their curatorial process. Tickets are $45. A conversation with Mr. Fischl and Ross Bleckner is scheduled for next Thursday. Tickets are $15.

A Conference for Young People to Create Solutions
Get Outside, Get Moving
Two Traditions, One Fair in Springs
END_OF_DOCUMENT_TOKEN_TO_BE_REPLACED