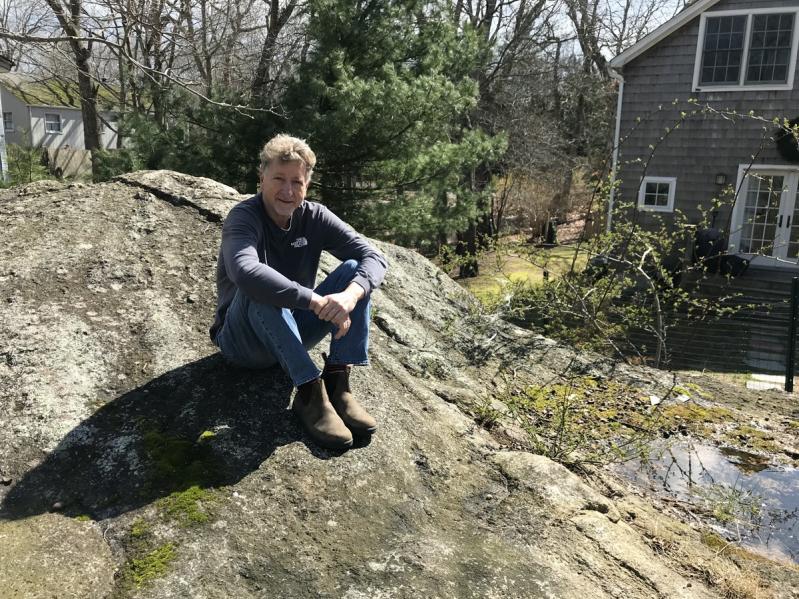 Shelby Raebeck perched on the largest glacial erratic on the South Fork, which dominates his front yard in Springs.
Mark Segal
By Mark Segal

After playing basketball at East Hampton High School with Ed Petrie ("the legendary Ed Petrie"), Shelby (Skip) Raebeck went to SUNY Oneonta, where he played on the varsity team and majored in physical education. "I was pretty good," he said during a recent conversation at his house in Springs, "but I was always an underachiever."

While it is often thought of as an easy major, "The irony is, I quit phys ed because it was too hard. It had so many required courses, and I couldn’t take the things I was interested in, which turned out to be English, writing, and psychology."

With a novel, two volumes of short stories, and a play to his credit, and a second novel in the works, it's clear Mr. Raebeck made the right career choice.

He was born in Ohio, but was not yet 2 when his family moved east after his father, a professor (later a founder of the Group for the South Fork), took a job at Dowling College in Oakdale. The Raebecks summered in Amagansett until moving there full time in 1960.

Mr. Raebeck, who was then in the eighth grade, pronounced his future educational path a "tortuous journey." Over a seven-year period, he transferred from SUNY to Ithaca College to Eckerd College in St Augustine, Fla., with breaks to work in East Hampton as a house painter. He earned his B.A. at Eckerd, where he studied with the writer Sterling Watson.

"The dissertation was my first attempt at a novel. I still have it, many, many versions later. I went back to it recently. You’re lost in it when you’re writing it, but when you read a piece after it has sat for a while, you get a fresh perspective. I’m pleasantly surprised -- I think it holds up. It’s a coming-of-age novel set on the East End, which is where most of my writing is set."

Countless books, both fiction and nonfiction, have been set in the Hamptons, but few, if any, are as rooted as Mr. Raebeck's in the daily lives of local people trying to get through the day and sustain connections with friends and family, often without success.

Of the 15 stories in the second edition of "Louse Point," published in 2021, Mr. Raebeck said, "These stories cover lots of ground in terms of my life. They go from college to the last three or so years." Characters surf, shoot hoops, seine, repair neglected homes, and, most important, struggle with relationships.

Running through the stories are currents of "loneliness, alienation, dislocation, the sense of the world moving on without you . . . those growing pains that people go through, that I went through. The schism between the summer fun and winter melancholy, between the haves and the have-nots, the workers, the underbelly versus the glamorous Hamptons. I gravitate toward the underbelly, toward the people I grew up with."

His 2018 novel, "Sparrow Beach," centers on Michael Dorian, who with his brother, Willie, runs a construction company that gets lured into high-stakes building projects by a wealthy New York developer.

Michael has a teenage daughter, Tommy, with severe anxiety issues, which are exacerbated by her parents' separation. He struggles to support Tommy emotionally, to accommodate his wife's desire for independence without alienating her, and with his and his brother's apparent good fortune, which he fears will come at a cost.

"When I sit down to write, I gravitate toward struggle," Mr. Raebeck said. "Struggle is the great thing in life. If there's no struggle, there's no story. The more profound the struggle, the more challenging the narrative, the bigger the payoff."

His play, "Fremont's Farewell," which has been performed at the Arts Center at Duck Creek in Springs, the John Jermain Memorial Library in Sag Harbor, and LTV Studios in Wainscott, began as a short story. The role of Fremont was portrayed by Gerard Doyle, an actor and colleague of Mr. Raebeck's at the Ross School, where he taught for 22 years.

In Act I, Fremont is a teacher about to be fired from a Hamptons private school. He addresses the audience -— the conceit is that they are his students -- in a monologue laced with humor, fury, profanity, and erudite references to Kafka's "The Metamorphosis," Yeats's "The Second Coming," and "Hamlet," among others.

Act II is set five years later, when Fremont is invited to give the commencement address at the same school after spending 37 months in a psychiatric institute and publishing a New York Times Notable Book called "Memoir of an Inauthentic Man."

Mr. Doyle's performance at LTV, which is available on Vimeo, is spellbinding, as he rides, in the playwright's words, "a roller coaster of emotion." At John Jermain, "it filled the room twice, and people were very positive. They keep telling me, find a bigger audience, and I say, how? I need an agent."

In fact, his current project, a short novel titled "Wonderless," is now in the hands of an agent. A departure for Mr. Raebeck, it's about "a growing group of high school dropouts in New York who, rather than fall through the cracks, ascend through them" and migrate as an expanding group from the East Coast to San Francisco.

Mr. Raebeck's short fiction has been published in a variety of magazines and anthologies, including Mid-American Review, Callaloo, and the Southwestern Review.

One story that appears in "Louse Point" as "Freetown" is about a black teenager and a white teenager who get pulled over for no reason by a policeman after playing basketball. Written before Black Lives Matter and the controversies of recent years, it was published in English language textbooks in Germany and Austria.

After receiving his doctorate, Mr. Raebeck taught at colleges in Utah, Maryland, and California before returning to the East End, where, in 2000, he was hired to teach English at Ross.

"Teaching fed my writing and fed my passion for literature for many years, but for the past 10 years or so, it became a competitor for my time. I was always passionate about writing, but it was always second fiddle. It’s become first, now -- the balance is shifting. Teaching is a tough profession to maintain for a long time."

Of Ross, he said, "It was dynamic and interesting, the kids were mostly good, and I had some great colleagues."

A Conference for Young People to Create Solutions
Get Outside, Get Moving
Two Traditions, One Fair in Springs
END_OF_DOCUMENT_TOKEN_TO_BE_REPLACED