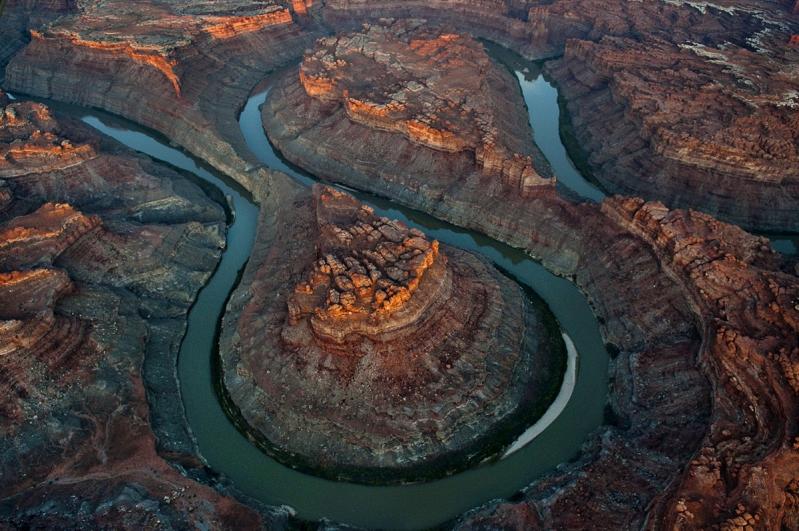 A view from "River" of the Colorado River's double oxbow loop in Canyonlands, Utah
By Mark Segal

In one of many local celebrations of Earth Day, Hamptons Doc Fest's annual Docs Equinox festival will feature four documentary films in partnership with the Sag Harbor Cinema and the Southampton Arts Center, starting Thursday and continuing through Sunday.

Water is the subject of "Aquarela," a film by Victor Kossakovsky to be shown at the cinema Thursday at 6 p.m. When he was approached about making a film about water, the director said, "If we are going to do another film talking about water, then no, I am not interested in this. But if water will speak by herself for 90 minutes, if water will have a chance to be our main actor -- this I will do."

With fast-frame cinema, sound, and a heavy-metal score (but neither dialogue nor narration), the film captures images of the power of water and ice in their many forms, from Russia's frozen Lake Baikal to Miami during hurricane Irma, to Venezuela's Angel Falls, and in four other countries as well.

Docs Equinox will move to the arts center Friday at 6 p.m. with "Bring Your Own Brigade," by the two-time Oscar nominee Lucy Walker. The filmmaker and her crew were embedded with a team of firefighters in the battle against the 2018 Camp Fire in Northern California, the deadliest blaze in the state's history.

Utilizing hundreds of hours of wildfire footage and interviews with firefighters, survivors, and scientists, the film investigates the causes of wildfire epidemics and examines what can be done in the future to mitigate the death and destruction. The screening will be followed by a conversation via Zoom with Ms. Walker.

The search for the elusive Tibetan snow leopard is the subject of "The Velvet Queen," a film by the wildlife photographers Vincent Munier and Marie Amiguet that follows Mr. Munier and Sylvain Tesson, a writer, to a cold mountain ridge where they hope to catch sight of a snow leopard. While waiting, they filmed Tibetan wild yaks, foxes, bears, and mountain cats.

Mr. Munier has been named Wildlife Photographer of the Year three times by the BBC; Mr. Tesson is the author of "The Art of Patience -- Seeking the Snow Leopard."

Carl Safina, an ecologist, author, and Stony Brook University professor, will be on hand for a discussion after Saturday's 2 p.m. screening at the arts center, where his books will be for sale.

The festival will conclude on Sunday at 3 p.m. at the arts center with "River,"  a bird's-eye view of rivers in 39 countries across six continents. Written and directed by Jennifer Peedom and narrated by the actor Willem Dafoe, the film shows rivers from never-before-seen perspectives and retells the history of rivers and human civilization.

Joseph Nizeti, the co-writer and co-director, will talk about the film via Zoom after the screening.

Mashashimuet Park's History and Future
A Conference for Young People to Create Solutions
Get Outside, Get Moving
END_OF_DOCUMENT_TOKEN_TO_BE_REPLACED