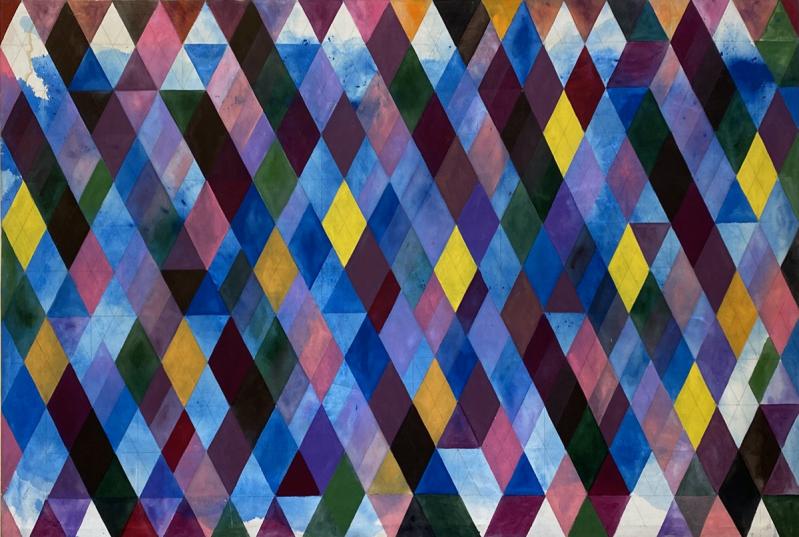 Arlene Slavin's painting "Garden Spring," from 1973, will be on view at the Mark Borghi Gallery in Sag Harbor.
By Mark Segal

Blossoms Bursting
"Gustavo Bonevardi: Water and Color on Paper," an exhibition of new abstractions created over the past year, will open Saturday at the Drawing Room in East Hampton and continue through May 16.

While the works on view evoke botanical forms, they are created by the artist's release of gouache and watercolor from above. The water-based pigments "burst into speckled blossoms and spatters, condense into orbs, and spread into diffuse veils of color," says the gallery.

Mr. Bonevardi creates linear motifs by turning the paper in tandem with gravity, creating single strands of color that in some works suggest stems supporting petals; in others, rocket trails.

Trained as an architect, the artist has also worked in other mediums, including basalt, African pyrophyllite, wood, and soapstone.

Fire, Yonder
"Yonder," paintings by Raymie Iadevaia, and "Scenic Fire," mixed-media works by Orlando Estrada, are on view at the Halsey McKay Gallery in East Hampton through April 24.

In Mr. Iadevaia's work, paint is layered from thin to thick passages, scumbled and scraped, rubbed in, stained, and saturated to create a multiplicity of marks and brushstrokes. He has described his paintings as "chromatic mixtures of domestic spaces and imagined landscapes," including house cats, coffee cups, hiking trails, woodland creatures, and staircases.

Grid, Full Circle
"Arlene Slavin: In Sequence 1970-2020," set to open Friday at the Mark Borghi Gallery in Sag Harbor, focuses on the vibrant diagonal gridwork that launched her career in the early 1970s and found renewed expression since 2010, both in paintings and in transparent outdoor sculpture. A reception will be held Saturday from 5:30 to 8 p.m.

"The early grid work . . . came out of the geometry of Frank Stella and Kenneth Noland in those years," the artist told The Star in 2014, "but I've always used thin paint and overlays and issues of transparency." Her work from that period was included in "With Pleasure: Pattern and Decoration in American Art, 1972-1985" at the Museum of Contemporary Art in Los Angeles.

The show will continue through April 28.

The Spring Run
Jim Levison, who has been fly-fishing for more than 20 years, works as a guide for saltwater anglers at Montauk Point from May through October. He has been photographing the outdoors for just as long, capturing the waters, beaches, landscape, and the fall Montauk "blitz," the annual feeding frenzy of stripers, bluefish, and false albacore.

An exhibition of Mr. Levison's outdoor photographs of the East End will open Friday at Lucore Art in Montauk and remain on view through April 21. A reception will be held on April 9 from 4 to 7 p.m.

"Maiden Voyage"
Harper's Gallery, which expanded from East Hampton to Manhattan in 2020 and, last year, to Los Angeles, will inaugurate its flagship location at 512 West 22 Street in Chelsea Thursday from 6 to 8 p.m. with "Maiden Voyage," an exhibition of paintings by Marcus Brutus.

The show, which takes its title from Herbie Hancock's fifth studio album and a ship's first journey, features what Mr. Brutus calls "everyday life, creating universally relatable moments, while celebrating Black life." His subjects include unsung heroes of African-American history whose contributions have been erased.

"Return to the Source," a selection of books integral to Mr. Brutus's practice, will run concurrently at the gallery's nearby space at 534 West 22 Street. Both shows will continue through May 14.

Subway Runners
"Jay Milder: Broadway Nonstop, Subway Paintings From the 1950s and '60s" will open Friday at the Eric Firestone Gallery at 40 Great Jones Street, with a reception from 6 to 8 p.m. It will be the first solo exhibition of the artist's early work in several decades.

The exhibition, which will continue through May 14, also includes a selection of the artist's gouache works on paper.

A Conference for Young People to Create Solutions
Get Outside, Get Moving
Two Traditions, One Fair in Springs
END_OF_DOCUMENT_TOKEN_TO_BE_REPLACED