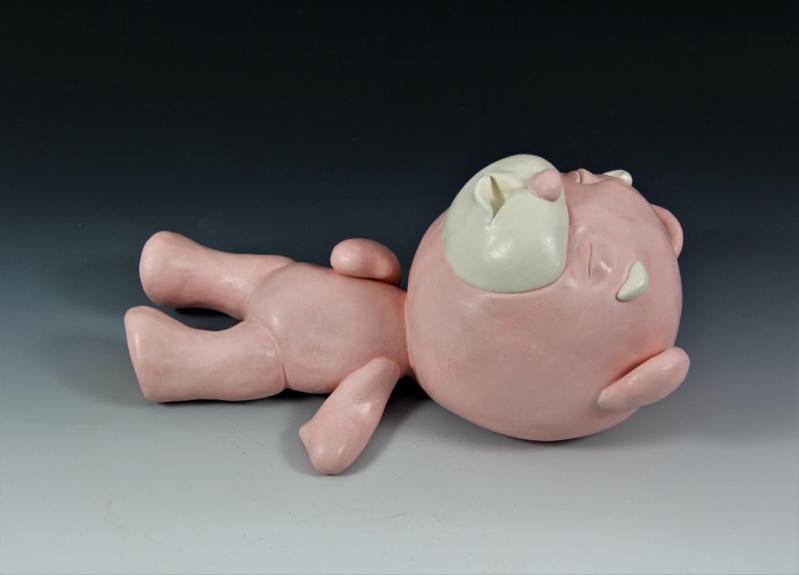 Although Mark Borghi has made a name for his galleries by showing works by some of the leading names in mid-20th-century art, he has always kept an eye out for notable newcomers.

Now, in his Sag Harbor gallery, the latter tradition continues with the second version of "Insta-Select," an exhibition culled from an open call to artists by a curatorial committee. According to the gallery, the group's criteria were "formalist achievement and conceptual ingenuity."

The first show was mounted in New York City. In Sag Harbor, the of-the-moment sensibility seems transposed from an edgier contemporary art fair booth. The works are startling in their purposefully cacophonous display, defying us to lose them in some kind of broader harmony. As suggested, this operates in their favor, as each piece jumps off the wall and into our apprehension.

As recent in manufacture as the works are, many have a familiarity that would complement a more standard Borghi exhibition and stand out in that way.

Ms. Zilili's "Summer," from last year, shares a similar energy and compositional impulse with some of Grace Hartigan's most notable work. Thinned out with white in places and mixed with black in others, the composition is as much her own work as any other. Yet that harkening back through history gives her painting a presence or vibration that feels monumental.

It's also hard not to see a Barnett Newman-esque "Zip" in Ms. Parsch's "Fast Forward, Rewind, & Pause II," from last year. Her red line, meticulously defined and floating in space on an apparently unfinished ground, feels spiritual despite her line's precision. In the installation, it floats above Ms. Demirkoparan's "I Want to Live Forever, No. 2," from 2019. Set up as a Rorschach blot of dots, afloat on the neutral background, the painting shares a similar untethered lightness.

The gallery seems to intuit the same Willem de Kooning-esque inheritance in three works hung nearby. M. Zil's "Marble" and Mr. Wajed's "Rappers Delight" have visual resonance to the Abstract Expressionist's black-and-white abstractions. Ms. Karsch works in a palette that unites those paintings with the flesh tones and blues and greens of his "Women" series and those works inspired by the East End landscape.

Even a quick second look makes a viewer realize that each of these paintings comes with its own quite different subtext. "Rappers Delight" features snippets of the seminal hip-hop anthem along with free-form brushstrokes, dots, and hash marks. The words "I don't mean to brag, I don't mean to boast," not necessarily obvious at first, come through the abstract window dressing, giving the piece meatier depths of meaning.

For Ms. Karsch, whose work is also on view in a solo show at Roman Fine Art in East Hampton, this palette is just one of many she explores in similar, gestural mixed-media works in her practice.

"Marble" could be literal or something else. Here, it seems like an exercise in the push-pull of negative and positive space. Rather than veins in rock, the white splotches and lines of varying width appear to be similar to tangled vegetation or other organic material.

Familiar to other genres from later in the game are Ms. Chuning's "First Impressions" and "Family Talk," from 2020. These pieces employ words and language in the way of Christopher Wool, Lawrence Weiner, and Mel Bochner, but the words are personal and feminine in nature and meaning. To underline this, the artist chooses a white background with light pink lettering. The surface, in Romney English wool, is fuzzy and soft like a sweater. It's inviting and comfortable. It softens the blow, but only slightly, of the meaning of the words on that surface: "You Were Pretty Once" in the piece titled "Family Talk," and "Why Don't You Smile More?" in "First Impressions."

These are words and phrases universally haunting to women of all generations, and viscerally so in their sense of lack or deficiency in not playing along with expectations. The quietly powerful pieces have a lingering poignancy that is uniquely the artist's own.

Ms. Rudnick's "Unwritten Law" and "Hindsight Bias" are subtler, with their words whispering through embroidery and relief.

Some of the more striking sculptures (with no pun intended for Mr. Jaffe's "Rothko House Painting," a Pop-like sculpture of a matchbook) include Mr. Rex's Sol LeWitt-like "Totem Nu" and Mr. Rybak's "Palindrome 2," another Rorschach-like treatment of a Gothic-style building that ends up looking something like a Louise Nevelson sculpture.

None of this is to say that these are not fully formed works of their own, only that they would likely appear right at home distributed throughout a more historical exhibition. As such they are not too far out of the gallery's wheelhouse. That gives them all an aura of continuity and recognition that makes a viewer want to know more.

The exhibition continues to the end of the month.

A Conference for Young People to Create Solutions
Get Outside, Get Moving
Two Traditions, One Fair in Springs
END_OF_DOCUMENT_TOKEN_TO_BE_REPLACED