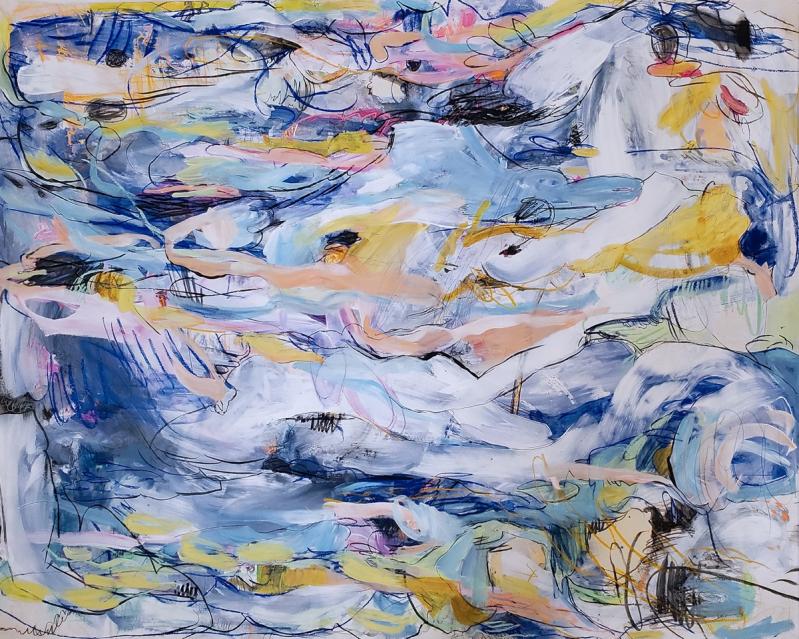 Elizabeth Karsch’s mixed-media painting “Thrives on Chaos” will be on view at Roman Fine Art in East Hampton.
By Mark Segal

Pioneering Abstractionist
The Swedish artist Hilma af Klint, now widely acknowledged as one of the first abstract painters in Western art history, was all but forgotten until the Guggenheim Museum’s 2018 retrospective of her work. The Parrish Art Museum in Water Mill, in collaboration with Hamptons Doc Fest, will show "Beyond the Visible: Hilma af Klint," a 2019 documentary by Halina Dryschka, Friday at 6 p.m.

The screening will be followed by an in-person conversation with Dannielle Tegeder and Sharmistha Ray, artists and co-founders of Hilma’s Ghost, a feminist artist collective that addresses art-historical gaps. The talk will also be streamed live. Tickets are $15, $5 for members, students, and senior citizens; streaming is free.

Also at the museum, Bonnie Rychlak, an artist and curator, will teach three hands-on workshops on encaustic painting, the ancient technique of using hot wax and pigment to create multidimensional works.

Dan Welden Open Studio
Dan Welden, a master printmaker, will hold an open studio and sale of more than 30 recent works on Saturday from 11 a.m. to 6 p.m. in Sag Harbor. At the same time, Ted Thirlby, a sculptor, will be creating new images from resurrected plywood on Mr. Welden’s giant press.

Pre-registration is required by calling the South Street Gallery in Orient at 631-477-0021 and leaving a name and contact number. The gallery will call back to confirm.

Explosions of Color
Roman Fine Art in East Hampton will open "Manifestations," an exhibition of paintings by the Sag Harbor artist Elizabeth Karsch, with a reception on Friday from 5 to 7 p.m.

The exhibition includes both airy, monochromatic works made during the winter months, and more frenetic, layered "explosions of color and form" created during the more hectic summer season, says the gallery.

The show will remain on view by appointment through April 18.

Skyscapes and More
"Atmospheres," an exhibition of paintings by Robert Lohman, and "Spring Selection," a group show of work by gallery artists, is on view at MM Fine Art in Southampton through March 27. A reception will be held on Saturday from 4 to 7 p.m.

Mr. Lohman, who lives in Southampton, is an interior designer as well as an artist. Some of his most recent paintings feature simple large blue skies, while others are animated by active, puffy, wispy clouds. He has cited the English painter J.M.W. Turner as an inspiration.

New Work by Hamada
An exhibition of new work by Hiroyuki Hamada is on view at Bookstein Projects, a gallery at 60 East 66th Street in Manhattan, through April 15. The show includes four paintings and two sculptures made over the past three years.

In both the two-dimensional and three-dimensional work, Mr. Hamada, who lives in East Hampton, combines geometric and biomorphic abstractions that are "unidentifiable yet deeply felt," says the gallery.

He creates finely textured surfaces with a mixture of acrylic, charcoal, enamel, graphite, and oil. While much of his work is limited to black and white with touches of umber, the recent paintings employ such vibrant colors as cobalt blue, saffron yellow, and blood red.

Charlotte Park in Chelsea
"Charlotte Park: Works on Paper From the 1950s" opens Thursday at Berry Campbell Gallery in Chelsea and will continue through April 23.

For Park, working on paper gave her considerable freedom. Her monochrome palette of the early '50s enabled her to focus on form. She reintroduced color into her art in the middle of the decade, evolving a lyrical style in which suggestions of the natural world appear.

Park united painting and drawing throughout the decade, creating a vocabulary featuring clustered loops, black curvilinear forms, and anatomical suggestions, but figurative elements were either suppressed or diffused.

In the late '50s, Park and her husband, the painter James Brooks, relocated from Montauk to an 11-acre parcel in Springs that the Town of East Hampton acquired in 2013. A committee of community members is working to have the structures renovated and the site preserved as an art and nature center.