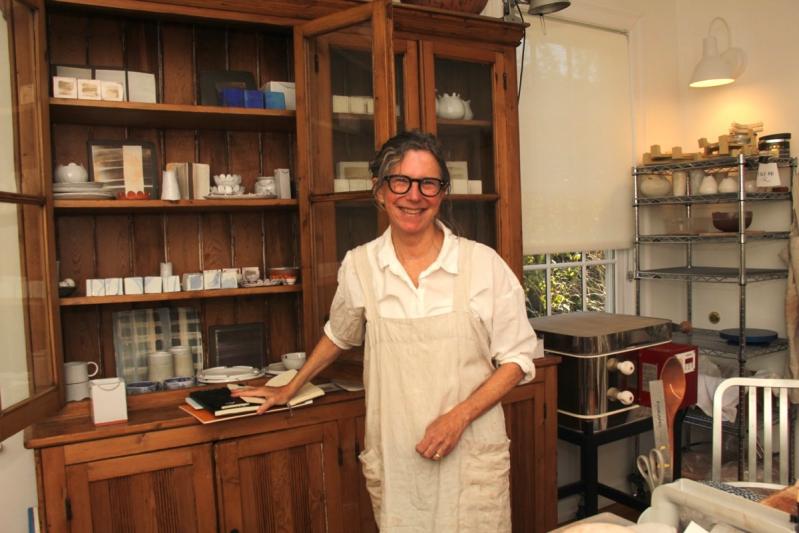 With a slow and meditative process, Liadain Warwick Smith, seen above with her ceramic pieces in her East Hampton studio, works in earthenware to create spare, classically modernist vessels.
Durell Godfrey
By Isabel Carmichael

Liadain Warwick Smith is tired of what -- in the face of the evidence -- seems to be an ongoing debate about whether or not ceramics should be considered art.

"I remember the first time I heard the debate between 'craftsperson' and 'artist' raised among ceramicists in a studio and thinking, is this actually a real issue still? The dilemma seemed so outdated," she said in her East Hampton studio. She finds it a spurious distinction because it derives in part from the fact that it was men, rather than women, who were able to get their more controversial work accepted as art, whereas "craft" was normally associated with female ceramicists and therefore dismissed.

Ms. Warwick Smith, whose work was selected in November to be in the gift shop of the Whitney Museum, studied literature, painting, and ceramics as an undergraduate at Bennington College and later attended the School of Visual Arts in Manhattan. In the mid-80s, when she began working in graphic design, "It was like being in the best art class in grade school: You got to cut with sharp tools, and used wax to assemble colorful paper and type."

Grove Press was looking for a "meticulous design zealot," which appealed to her need to touch what she's making. She answered its ad in The New York Times, was hired, and loved the unhurried system of inking, pasting, and collaging by hand, just as she now likes to "coil and pinch and work at a slow pace" while creating her ceramics. She left the job, she said, in the late '90s, "when it all went to computers."

She has since worked with earthenware clay, living in East Hampton with her husband, Palmer Smith, more or less full time for the last 10 years. She does consistently repeat the shape of the base for her pieces, making a small, round slab that she puts on a concave piece of plaster. When the clay dries enough to hold its shape (the moisture is absorbed over time by the plaster), she takes it off and begins the coiling. The work could go faster if she used a wheel, she acknowledged, but "the speed is not what I want at all." To the contrary, she enjoys the time it takes.

The result is therefore less important to the artist than the task of producing it, "which is always my joy."

"I roll coils and pinch up to build a piece. For some work, I roll the clay flat and build with slabs and decorative elements." In order to make a vessel, it has to be completely dry, hence the wrapping of it in plastic and leaving it on shelves for weeks at a time. The longer it dries, the less the chance of cracking or of pieces falling off. Ms. Warwick Smith makes the little scallops on some of her work separately, attaching them patiently and making sure they are connected. "Ceramics does benefit from patience," she remarked.

She uses an electric mixer for the glaze, and a whisk. "You fire once to get most of the water out of the clay; the second firing is after you put glaze on." For an additional detail, such as gold luster, there's yet a third time. Firing is done for 12 hours at 2,000 degrees, and the pieces must cool for another 12 hours. She sometimes peeks in, but does not open the kiln for 24 hours.

"I feel the challenging aspect of my work for others is the seeming simplicity," she said. "It is the material, the form, and the process that I am interested in. Primarily, now, the slow, meditative process of coiling and pinching inch by inch. It is the peaceful quality -- that is what I wish to evoke when people look at my work."

Asked about the colors she prefers, the ceramicist replied, "I absolutely love the simple, calm, clean, pure quality of white  .  .  .  and I've always liked working with the warm red clay. It is traditional to combine the earthenware clay and the white majolica glaze. I like the play between the traditional material and the contemporary forms. Right now, I am playing with some soft matte textures to finish work and contrast these pieces with the glossy white majolica."

The Nourish gallery in Brooklyn shows her earthenware vessels, and her work is also for sale at Matriark in Sag Harbor, a lifestyle shop, and at Lazy Point in Amagansett.

Carl Barnett, the owner of Nourish, has supported Ms. Warwick Smith's work from the start. "Liadain's work is the reflection of pure form and creation, the manifestation of intuition and the desire for physical making. Her work is a tying together of utility and beauty --  what beauty does and design brings. The evidence of the hand in her work brings a physical intimacy while the addition of scalloped arches .  .  . adds a node to the romance of architecture," Mr. Barnett said on his website.

Ms. Warwick Smith (her first name is pronounced "Lee-a-thin") grew up in Greenwich Village. Her parents discovered East Hampton in the 1960s and rented several summer houses before buying their own, on Cedar Street in the village. She has particularly fond memories of a summer spent on Gerard Drive in Springs, owned by the former ad executive-turned-bayman Arnold Leo, whose daughter, Melissa, "used to babysit for us. She'd direct me in plays we'd make up, which kind of blows my mind now!" (The babysitter is now a famous Academy Award-winning movie and television actress.)

If she had to choose a single artist who has influenced her work over time, Ms. Warwick Smith said, it would be Giorgio Morandi, who depicted spare ceramic forms in his paintings and whose retrospective she saw at the Guggenheim in the late 1980s. "The tenderness and honesty in his work is simple, pure, and moving. I can relate to his intimacy with everyday objects and their relationship to each other."