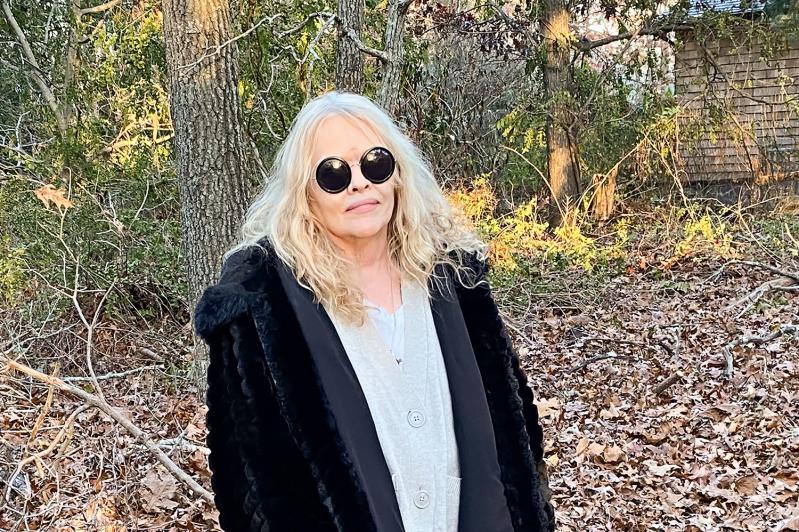 Pamela Willoughby, whose working life has revolved around art and cooking, took a break in the woods behind her East Hampton home.
Mark Segal
By Mark Segal

"I was a chef, and I was tired of being a chef," said Pamela Willoughby, explaining why she left New York City for the East End in the late 1990s. That she wound up in the art world might not seem an obvious pivot, but Ms. Willoughby has an almost uncanny knack for meeting interesting and often unconventional people.

When her marriage broke up in the 1980s, she fled Los Angeles for New York, where she landed, deliberately, at the venerable Chelsea Hotel. The first person she met there was Viva, one of Andy Warhol's superstars, "and she started introducing me to people." Among her evolving circle there were Virgil Thompson, Larry Rivers, the artist Rene Ricard, and Allen Ginsburg.

Cooking at a succession of increasingly notable venues, including Jams, Two Boots, Trixie's, and MK, a dinner club The New York Times called "a cross between the 21 Club and Nell's," put her at the junction of the culinary and cultural worlds.

"At MK, there was no V.I.P. room, so everyone would come into the kitchen to hang out or smoke a joint. Keith Haring would come in every night and bring us posters and sign them for us. I loved cooking for him."

She found herself mingling with personages as diverse as Malcolm Forbes, George Plimpton, the art dealer Tony Shafrazi, and John Lurie, the musician. "Every night was a party."

Sounds like fun, but Ms. Willoughby was tired out, and no wonder. Once she got here, it isn't surprising that she sought work at an art gallery rather than a restaurant. Hearing one day that Mark Borghi was looking for an assistant for his Bridgehampton gallery, she strolled in and asked for a job.

After a long talk on a Main Street bench, Mr. Borghi, whose primary gallery was in Manhattan, hired her to oversee the local outpost while he took a few months off to go to Greece. Ms. Willoughby wound up working there for six years.

"I put myself through another kind of college working there. He has so many artists on his website, and I studied all of them, every single day, every spare moment," while connecting in real time with such art world luminaries as the critics Robert Storr and Phyllis Braff, and the artists Robert Dash and Dennis Oppenheim.

Fast forward to today, when she is about a month away from opening a gallery of her own, Willoughby, in Southold. A longtime friend, John Pierce, who'd owned a bed-and-breakfast on the beach in Los Angeles, had sold it, she said, and begun looking for a similar property on the East End. He and his partner found what they wanted on the North Fork.

She wanted to name it The Great Room; Mr. Pierce insisted on Willoughby.

The plan is to open quietly, before Christmas, with a show of work by Vito Acconci, Jean-Michel Basquiat, Peter Dayton, Christa Maiwald, William Rand, Marcia Resnick, and Rene Ricard. The exhibition will remain up through the winter in the great room, with rotating works from an ever-expanding roster of artists, among them Larry Rivers, Dawn DeDeaux, Steve Miller, and Maryam Eisler, in an adjacent lounge area.

During the years after her time at Mark Borghi, Ms. Willoughby organized exhibitions at Keyes Art in Sag Harbor, the Fireplace Project in Springs, and the Norwood Club in Manhattan, among others.

"I work with people I have a deep and long connection with," she said. "I understand their work because I understand their story of life. It's very important to me to curate in places that I feel a deep empathy with."

One such is East Hampton's LongHouse Reserve, where for the past five years she has provided artworks for the summer benefit auctions. "Their gardens, the lifework of Jack Lenor Larsen . . . To be a part of that is incredible to me."

In 2020 she organized "3 Day Weekend," the first show at the Fireplace Project after the onset of the pandemic. The exhibition drew several hundred visitors each day to see work by Don Christensen, Mary Heilmann, Saskia Friedrich, Sabra Moon, Warren Neidich, among many others. A reading by the poet Max Blagg filled the venue.

The Norwood Club was a private venue in Manhattan that closed last February after a 15-year run. Owned by Alan Linn, its membership included Keith Richards, Boy George, and Stella McCartney; over the bar hung a light fixture by Alexander McQueen, "which looked like a demented Christmas tree."

Ms. Willoughby was invited to brunch there 10 years ago. "I saw this guy with this dog when I came in, and I liked his looks. I said, 'I don't know anything about this place.' He said, 'Oh, I'm the owner.' We hit it off." It became her home away from home for the next decade, and in December 2020 she organized a show there of work by Peter Dayton, Nathan Slate Joseph, Blair Seagram, Lucy de Kooning Villeneuve, Kacper Abolik, Victoria de Lesseps, and Christopher Makos.

Freelance curating, she said, has "been a lot of fun, because I could just show whoever I wanted, I didn't have anybody over me. But I haven't had a gallery . . . until now."

Ms. Willoughby was born in Tacoma, Wash., but moved to New Orleans at the age of three. Her mother, a classical pianist, was a member of the New Orleans Symphony; her father worked for Boeing, writing texts for the Apollo space project.

When she was a teenager, the family returned to Tacoma, but it was in New Orleans that she learned how to cook. That tutelage, from the family housekeeper, paid off. In a 1988 New York Magazine piece about Trixie's, Gael Greene wrote that "Chef Pamela Willoughby's pedigree, out of New Orleans by way of the kitchen at Jams, shows in the homey cornbread-stuffed chicken and airy buttermilk biscuits, the kicky hot gravy and rich chocolate cake."

er career as a chef began one summer on Martha's Vineyard, when she took a job at a local restaurant. The chef "sent me to the backyard with a bottle of Off, rubber gloves, and 1,000 oysters."

From that inauspicious beginning, she returned to New York, where she saw an article in a food magazine celebrating Jonathan Waxman of Jams as one of the 10 best chefs in America. She walked into the restaurant and asked for a job.

"I love Jonathan, and he saw something in me that made him want to teach me. So I went through all the stations." Jeff Salaway and Toni Ross were working at Jams at the time. With Susan Lazarus-Reiman, the three of them left in the late '80s to start Nick and Toni's.

But, except for a very short-lived catering venture in 2010, Ms. Willoughby's life for the past two decades has centered on art and artists. She organized the art auction for Project Most's Eileen's Auction benefit in 2016, and, in June 2019, she was a developmental director and curator of the Planned Parenthood Benefit Exhibition and Gala held at Guild Hall. Among the 50 artists were April Gornik, Michael Halsband, Mary Heilmann, Pat Place, Nathan Slate Joseph, Bert Stern, and Kenny Scharf.

Willoughby, her soon-to-open gallery, is "going to be edgy," she said, "but they're all mid-career artists. I'm putting my everything into the gallery."