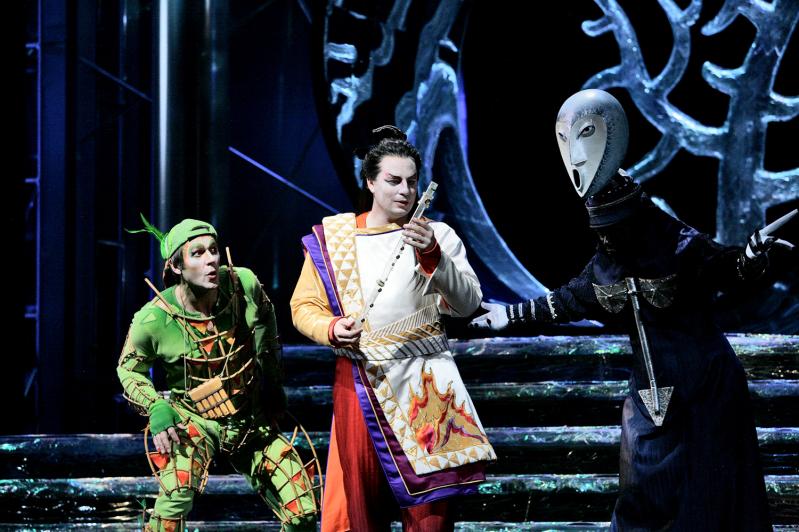 Nathan Gunn as Papageno and Matthew Polenzani as Tamino in Mozart's "The Magic Flute," from The Met: Live in HD at Bay Street.
Ken Howard, Met Opera
By Mark Segal

There is good news for Metropolitan Opera enthusiasts dismayed that Guild Hall is closed for renovations. The 2022-23 season of The Met: Live in HD will be screened at Bay Street Theater in Sag Harbor, beginning Saturday at 12:55 p.m. with the world premiere of "The Hours," adapted by the Pulitzer Prize-winning composer Kevin Puts from Michael Cunningham's book of the same title.

Mr. Cunningham's story was inspired by Virginia Woolf's novel "Mrs. Dalloway." The opera production stars Renee Fleming, Kelli O'Hara, and Joyce DiDonato as women from different eras who each grapple with their inner demons and their roles in society. The Met's music director, Yannick Nezet-Seguin, will be on the podium, and Phelim McDermott will direct.

The Live in HD series was launched in 2006 with Julie Taymor's hit production of Mozart's "The Magic Flute," which had premiered live at the Met two years before and has since had more than 100 performances there.

After a holiday break, the series will resume in January with a simulcast of Umberto Giordano’s "Fedora." Encore screenings of Verdi's "La Traviata" and Cherubini's "Medea" are set for February. The series will continue through September, with a total of five live performances and six encores.

Tickets for individual screenings are $35, $25 for Bay Street Theater patrons and summer season subscription holders. A series pass is $150.