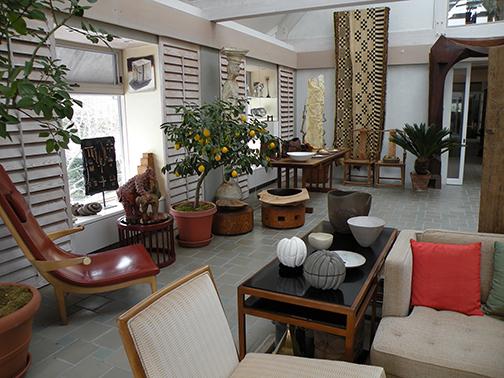 The National Trust for Historic Preservation has added three new East Hampton sites to its Historic Artists' Homes and Studios (HAHS) program: the Elaine de Kooning House, LongHouse Reserve, and the Arts Center at Duck Creek. The three venues join the Pollock-Krasner House and Study Center and the Thomas and Mary Nimmo Moran Studio as members of the HAHS coalition, which includes 61 public organizations across 25 states, each preserving the home and studio of an important American artist.

Elaine de Kooning bought an original saltbox house in Northwest in 1975, and later added a studio. After her death, the house was occupied first by the sculptor John Chamberlain; then by the painter Richmond Burton. Under the direction of its current owner, Chris Byrne, the site now hosts artist residencies and related exhibitions and programs, as well as tours by appointment.

LongHouse Reserve was created by Jack Lenor Larsen, the world-renowned textile designer and weaver. The LongHouse gardens, featuring more than 60 sculptures, have long been open for public enjoyment. Inspired by a seventh-century Japanese shrine, Larsen decided to build his house on the property in 1986. It was designed by the architect Charles Forberg, the son-in-law of the Bauhaus founder Walter Gropius.

Larsen "built a modernist version of the Ise Shrine smack in East Hampton, and planted a 16-acre garden of color and ideas and birds around it, all to enlarge his scope of work as a master of color, craft, and a master weaver," said Carrie Rebora Barratt, the venue's director.

The Arts Center at Duck Creek celebrates the legacy of the Abstract Expressionist artist John Little, who moved a 19th-century barn to the property in Springs in 1948 for use as a studio and gathering place for artists. It continues to evolve as an arts center, featuring free exhibitions, musical performances, poetry readings, and multimedia events.

"We are only five years into the stewardship of John Little's studio at historic Duck Creek Farm," said Jess Frost, the executive director, "and I am certain that being a part of this extraordinary network will help guide us as we continue to grow."

Three other sites joined the new East Hampton members: the Jonathan Fisher House in Blue Hill, Maine; the Home of Aminah Robinson in Columbus, Ohio, and the Gertrude Vanderbilt Whitney Studio, which is located at the New York Studio School in Lower Manhattan.

"The six sites bring a new diversity to the HAHS program," says a release, "elevating the stories of women, artists of color, and members of the L.G.B.T.+  community to paint a more inclusive and complete picture of our nation's art history."