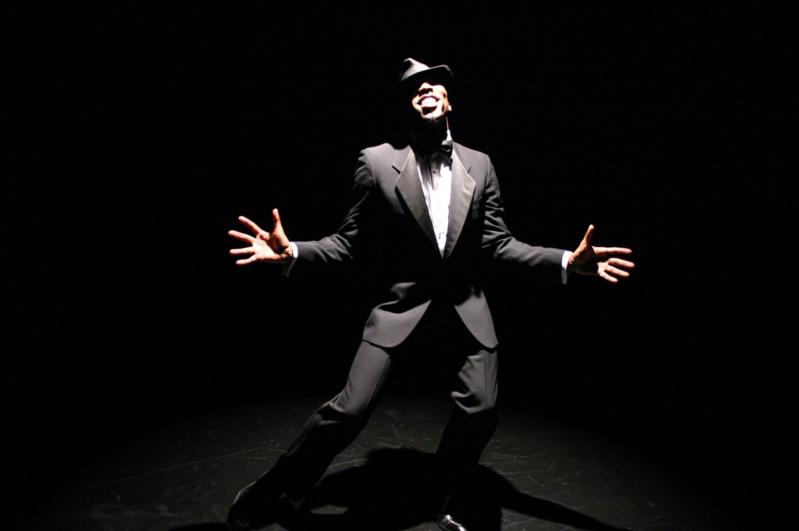 Eric Jordan Young as Sammy Davis Jr. in the musical biography "Sammy & Me," which will be shown at Bay Street Theater in Sag Harbor next summer.
By Mark Segal

Bay Street Theater, seeking to build anticipation for next year's high season, has announced its summer theater schedule, which will launch on May 30 with the world premiere of "Double Helix," a new musical by Madeline Myers.

Directed by Scott Schwartz, the theater's artistic director, with choreography by Addy Chan, "Double Helix" puts to music the story of Rosalind Franklin, whose photograph, now famous, revealed the structure of DNA to be a double helix, but who has been left out, until now, of the dominant narrative about the momentous discovery.

Ms. Myers's musicals include "Flatbush Avenue," "Masterpiece," and "The Devil's Apprentice," which had its world premiere in Copenhagen. Ms. Chan has worked extensively as a choreographer in television, film, and theater.

A new adaptation by Jeffrey Hatcher of Frederick Knott's play "Dial M for Murder," the suspense thriller made famous by Hitchcock's 1954 film, will follow "Double Helix." Directed by Walter Bobbie, the story centers on Tony's suspicions that his wife, Margot, a wealthy socialite, is having an affair. As he plots to have her killed in a stylish game of cat-and-mouse, the tension mounts.

Bay Street will shift from murder back to music with "Sammy & Me," an award-winning one-man musical biography of Sammy Davis Jr. written by Wendy Dann and Eric Jordan Young. It is directed by Ms. Dann, whose regional work includes productions in Dallas, St. Louis, Syracuse, and Albany, and stars Mr. Young.

The play tells Davis's story from his vaudeville childhood to the Las Vegas strip. At the same time, it unpacks the complexities experienced by Mr. Young, a Black American producer, director, choreographer, writer, and actor with extensive Broadway and Off Broadway credits, caught between acknowledging racial identity and trying to transcend it as a performer.

The season will wrap with "Master Class," Terrence McNally's Tony Award-winning play from 1996. Directed by Susan Stroman, a five-time Tony Award winner, and starring Kate Burton, the daughter of the actors Richard Burton and Sybil Christopher, who was a founder of Bay Street Theater, the play catches up with Maria Callas in the waning years of her life, when she retreats into memories of acclaim and adversity while dealing with her students during a funny and brutal master class in singing.

"Wow, what a season this will be!" said Mr. Schwartz. "From a new musical written by a thrilling new voice to a personal and timely one-man show, to cherished plays directed by Tony Award-winning leaders in the American theater, all four productions will showcase the best that theater can be. To welcome back Kate Burton, not only one of the greatest actors of our time, but also someone who has been a part of Bay Street from the very beginning, is a particular joy for us."

Subscriptions for the 2023 season are now on sale.