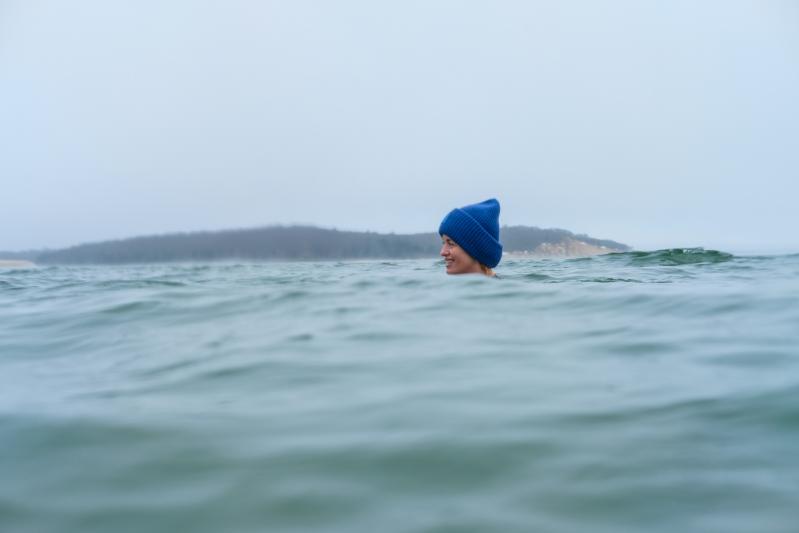 Amanda Fairbanks developed a winter swimming regimen last year. She wrote about it and the story of her plunge partner in an article last spring.
Lori Hawkins
By Jennifer Landes

In a recent Instagram post, Amanda M. Fairbanks admitted she is "pretty darn sure I peaked in 2021." Anything's possible, but all evidence points to the contrary.

It was right before Memorial Day last year when the Sag Harbor resident's book "The Lost Boys of Montauk" was released. Among the positive responses were starred reviews from Kirkus and Library Journal for the exhaustively researched story of a local tragedy dating back to the 1980s. It was a best seller in South Fork bookstores, a Newsweek magazine best book, and an Amazon editors' best history book.

In November, she confirmed that the story had been optioned as a scripted series for Disney Television Studios. Right before Christmas, it was featured on "CBS Saturday Morning." A month prior to her book's publication, her essay about Stephanie Reece's profound loss, grief, and winter swimming appeared on the front page of The New York Times's Sunday metro section.

Ms. Fairbanks, who once worked at The Times, is also a former writer for The Star and East magazine, where the idea was planted five years ago to revisit a story about the loss of four men on the Wind Blown. The fishing boat and its crew disappeared off Montauk during a 1984 storm and were never found.

After many months of research, reporting, and writing, she sold the book in January 2018 with an expected publication date in May 2020. But 2019 evolved into a personal hell -- she became sick with a case of Lyme disease that took months to correctly diagnose. The neurological symptoms were so severe that she couldn't mentally process the first round of editor's notes on the manuscript. And that was only one of her complex and debilitating symptoms.

"As soon as I handed in the first draft of my book, in February or March of 2019, my immune system just totally gave way," she recalled recently. "I was not able to make sense of the most basic things." Weeks of doxycycline and further recovery from "the cure" eventually brought her health and mental acuity back.

She published an essay about the experience in The Common, a literary magazine out of Amherst College, in March 2020. "It was a real teacher for me," she said, in terms of learning the benefits of slowing down, focus, and empathy for herself and others.

Looking back, she said stress about the book was likely a contributing factor in the breakdown of her immune system. Researching the tragedy and the lasting trauma it caused its survivors was an immersion in a dark and tremendously sad place. Grappling with the subject matter, choosing what to put in and leave out, and then finding a format that worked to give the multiple stories of victims and survivors some cohesion were also struggles. She said it was "like a Jenga puzzle, how to tell the story and in what order."

For months she wrestled with the material and what the repercussions of publishing it would be. Having come to know very personal details of the sources she interviewed, she felt a responsibility to them "that really weighed heavily on me." Yet as a journalist, she had to heed "my need to tell the truth of the story" as she saw it.

The book idea came out of a series of conversations she had with Mary Stedman, the widow of Mike Stedman, the Wind Blown's captain, in 2017. Although Ms. Fairbanks had her approval and cooperation for the book initially, Ms. Stedman withdrew her support once certain family secrets were revealed in the course of interviewing other subjects.

"I remember feeling quite nervous to tell her that I wanted to take our initial conversations and turn that into a book proposal that I would try and sell. And she couldn't have been more supportive." Ms. Fairbanks recalled her saying, "I knew since the moment I met you that you were going to write a book about this. I was just waiting for you to figure that out."

Doing the research, "there were so many things I found that were more compelling to me than just the four men on the fishing boat." The psychological aspects, the grief and trauma of the survivors, and the families' histories provided "endless fascination." There were so many things "present there, which I obviously didn't know when I was just starting out."

To assemble the book, she gathered everything she thought was important and then began "chiseling away at it." She acknowledged that the structure doesn't work for some readers. Having never written a book before, "it was me throwing paint on the wall . . . not knowing how much information to gather in order to write the story."

Some subtopics in the story also needed understanding and explanation on her part. Things like surfing, fishing, and golden tilefish, which the Wind Blown crew was chasing before the storm, required research because she had no prior knowledge of them and assumed readers wouldn't either.

Including herself in the story also caused some controversy. She noted that like other journalists, she usually leaves herself out. "Then I realized that part of the story, and this obsession with it, was very specific to me and my relationship to this place and as an outsider to this very insidery culture."

She believed readers might trust her more as a narrator (particularly where there were different recollections of the same events) if they knew who she was and how the stories people told her felt very personal to her. "And the place, obviously, is where I live, which has its own set of complications and challenges. But I didn't set out with a scorched-earth mentality. There was actually a lot of empathy and real reverence for not only the people that had endured all of this trauma, but the place itself."

She addressed the local backlash, and the uncomfortable situation of living in the community that brought her both the story and the negative reaction to it, in an essay for Columbia Journalism Review in the fall. In it, she pointed out that Ms. Stedman called her "the great exploiter" in a note she sent after reading the final product. And, after a summer and fall of many book events, "I've discovered that Mary is hardly alone in her damning personal assessment."

It became obvious in the interactions at these events and elsewhere, such as social media, that "among a certain subset of readers, especially those with generations-long ties to the South Fork of Long Island, an outsider's telling of the gritty truths behind a local tragedy was seen as unnecessarily intrusive. Others balked, directly and indirectly, that it was a woman who finally told this long-buried story, and seemed to take particular offense that it hadn't been penned by one of their own: preferably a native son," she wrote.

The essay on Ms. Reece in The Times describes what happened when her children were killed by her ex-husband before he killed himself in 2018. Ms. Fairbanks wrote about the winter plunges she began taking with Ms. Reece early last year and how she learned of the tragedy. It also details how Ms. Reece has remade her life here with Dale Leff, an aunt she is close to, and by returning to a previous job as a pro at East Hampton Indoor Tennis.

When Ms. Reece revealed her story, Ms. Fairbanks said her three-year focus on the grief of parents and children for "Lost Boys" gave her an ability to listen to those details in a way others couldn't. "It wasn't that I felt comfortable listening to it, but it didn't freak me out in the way that it does a lot of people that hear about it, who then don't ask a follow-up question," she said. "I don't know if I seek it out or it seeks me out, but I am fascinated by how people experience those traumatic losses and then what comes out of it."

Her next book proposal is about groundwater contamination in another state, a subject choice rooted in her too-close-to-home experiences last year. Yet she's not entirely done with the first book. As previously reported in The Star, she is working as a co-executive producer with Bert Salke, who optioned "Lost Boys" for Disney and is now looking for a showrunner for the series.

In September, she accompanied Ben Roberts of Amagansett and a diving crew to the site where the Wind Blown is thought to have sunk. Some 200 feet below the surface the divers found "what they think is the make and model of the engine" and other possible remnants. She said the divers will have to go back several more times to make a positive identification. She plans to be with them.

The article has been changed from the print edition and its original online version to correct the date Ms. Fairbanks sold the book.