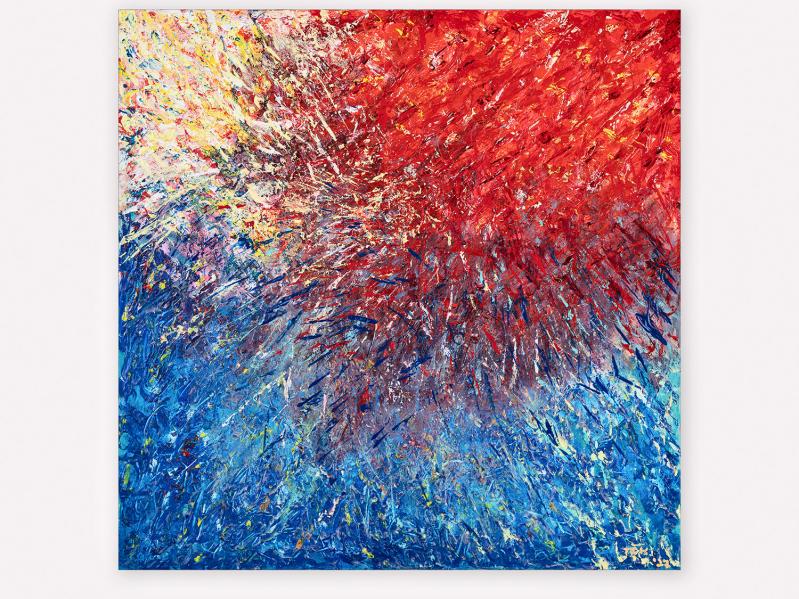 "Retreat From Snake Island" is one of Ted Hartley's many paintings that can be seen at Keyes Art in Sag Harbor until next Thursday.
Gary Mamay
By Jennifer Landes

To those unfamiliar with his resume, Ted Hartley might seem like any one of dozens of weekend artists, looking for something to fill their time while they gaze idly at the East End light.

But Mr. Hartley is not only more serious than that, he is what one might call a modern-day Renaissance man, with all the oxymoron implies. "Stories in Color," a show of his paintings at Keyes Art in Sag Harbor, is a collection of work inspired not only by the East End and its light and other qualities, but also Ukraine's battle for survival.

And when he paints those subjects, they are informed by his experience as a United States Navy fighter pilot in areas all around the world. Although celebrating Ukraine's triumphs, they seem weightier, more immediate, and more empathetic than other attempts to capture the devastation of bomb blasts on urban squares and bloodshed on wheat fields.

The Ukraine paintings are abstract, but have very specific titles tied to real places and events. Names like "Kyiv, Pro Patria," "Retreat From Snake Island," and "Red Flight From Izium" are evocative. Each painting is roughly the same size: 36 inches square, with the first slightly taller at four feet high. As expressionist paintings go, the size is on the smaller side, but the content carries big emotions and pathos.

Each features a dramatic red area, set off by multicolored areas sometimes blue, sometimes green, or a smoky melange. The compositional space is activated by splatters and whorls and other active mark-making. They look vibrant and energetic, even more so for someone in his 90s.

Known for his philanthropy and support of Guild Hall, Mr. Hartley has also pledged to give the proceeds of the sales of these paintings to groups that support Ukraine. The largest painting, "Kyiv: Pro Patria," which has already sold for $50,000, will support the Red Cross in that country and two smaller civilian support organizations. According to the artist, the painting celebrates "the success of the Ukrainians in repulsing the Russian attack on their capital."

The square paintings' sale proceeds will benefit the Olena Zelenska Foundation, which was formed by the first lady of Ukraine to address medicine, education, and humanitarian aid needs. Mr. Hartley met Ms. Zelenska during a recent New York City visit and "found her quiet strength and confidence contagious."

According to the exhibition catalog, "Retreat From Snake Island" was inspired by the story of three Ukrainian lightkeepers who refused to surrender the island to the Russian fleet. "Red Flight From Izium" celebrates the repulsion of Russians from areas of Ukraine they had invaded. For Mr. Hartley, his paint and palette knife make him feel less helpless on the sidelines. He said they allow him to feel he is in the fight.

The only issue with this show is it is a kind of hunt-and-peck exercise in which Mr. Hartley's paintings have some prominence on the walls but can also be interspersed with unrelated works in the gallery. Sometimes they can be found on the floor propped up against the wall.

As such, a sense of cohesion and relatedness is lost. It is less an exhibition than a display, even with wall labels. Although the quirkiness can be charming at times, a show like this could use more clarity.

The mix of artists and artworks around the gallery do dovetail with the diverse aspects of the artist's own career, which seem to play out in the works in this show. As part of his naval service, Mr. Hartley worked as a White House aide during the Eisenhower and Kennedy years. When injuries from an aircraft accident ended his military career, he went into management and then finance. In Los Angeles for a job prospect, he ended up on a television series in a continuing role. His acting career continued with films and a starring role in another series. He moved into film direction and production, eventually becoming a stockholder in RKO Pictures Corporation and then became its chief executive officer. He is also an active member on corporate and charity boards.

The artist clearly understands international relations, the wages of war, how charitable organizations, corporations, and governments function, and so many other aspects of modern societal structure present in the execution and underpinnings of these paintings.

He came to art through his marriage to Dina Merrill, an actress and heiress of the Post family. When she was in failing health, he kept her engaged by bringing art instructors into their home to teach them and their friends how to paint. He took to it naturally and has been devoted to art-making ever since. This is the third show of his at Keyes.

Although the Ukraine series attracts the most attention, there are plenty of other paintings from the past few years and the present that do not address that conflict. Some are just as foreboding, but others are light and exuberant.

Sometimes his works seem fully nonobjective, like "Let There Be Light." Yet there are other pieces, like "Woods," from 2021, and "Visions of Things to Come," a May painting of a South Fork garden about to come into its own, that are clear in their intentions.

"Pompeii" has the similar fiery fury of the Ukraine series, but that of nature, not of man. Another painting, called "Fury," is realized in tones of green and yellow highlighted with white. Its bird-like forms may be waging some kind of battle, but the overall composition feels calming compared to some other pieces on view.

A small but colorful gouache on board, "Third of July," is celebratory in mood with hints of fireworks but also an implied sense of caution, with a white field at bottom broken up with strokes of red. Painted this year, it appears informed by Russia's invasion of an independent democratic nation and perhaps our own country's flirtation with authoritarian impulses.

The show will remain on view through next Thursday.