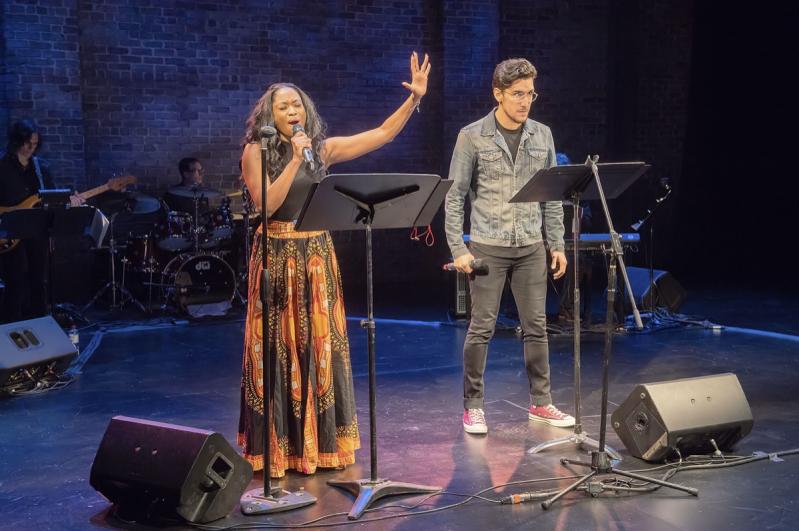 “Title Wave at Bay Street: The New Works Series” will return over the next two weekends to Sag Harbor's Bay Street Theater with four new plays, to be presented live and in-person. The series, which features readings of plays in development, provides playwrights the opportunity to hear their works in front of an audience, and to learn from the audience’s response.

Scripts from previous “Title Wave” readings have gone on to full productions at Bay Street and other theaters. “The Prompter,” read in 2018, was produced during Bay Street’s 2019 summer season, and “Walden,” also read in 2018, opened on the West End in London earlier this year.

The series will launch Friday evening at 8 with “Between/Time” by Dane Figueroa Edidi. The play, which will also be performed on Saturday at 2 p.m.,  is the story of an artist and a C.E.O. in Baltimore who fall in love while trying to forget past mistakes.

Mx. Edidi, a Helen Hayes Award-winning playwright and a Helen Merrill Award winner, twice nominated for Helen Hayes Awards in choreography, is the founder of The Inanna D Initiatives, which produces and cultivates events and initiatives designed to celebrate the work of transgender and gender-nonconforming artists of color.
Majkin Holmquist’s “Tent Revival,” set in rural Kansas in 1957, is about a woman whose miracle starts her husband on the path toward becoming a faith healer. Their daughter, Ida, must face the cost of deeds done to inspire devotion when the demand for spiritual healing grows faster than anybody expected. It is set for Saturday at 8 p.m. and Sunday at 2.

Ms. Holmquist is originally from central Kansas, where she co-founded the Next Stage Theater Company. Her work has been developed at New York Stage and Film, Bay Street Theater, and the Roundabout Theatre Company; she is currently a lecturer in playwriting at the Yale School of Drama.

“Princess Clara of Loisaida,” written by Matthew Barbot, centers on Clara, a middle-schooler obsessed with video games, and her older brother, Jose. Their father, a widower, is catatonic. Scraping by on the Lower East Side, they start to question their reality when a fantastic prophecy they created comes true.

Mr. Barbot received his M.F.A. From Columbia University and was a New York Theatre Workshop 2050 Artistic Fellow. His play “El Coqui Espectacular and the Bottle of Doom” received the Kennedy Center’s Latinidad Award, while “Princess Clara of Loisaida” was a finalist for the Columbia @ Roundabout New Play Series and the Latinx Theatre Commons 2018 Carnaval of New Latinx Work. “Princess Clara” will be performed on Friday, Sept. 17, at 8 p.m. and on Sept. 18 at 2.

“The Right Here, Right Now” will round out the series on Sept. 18 at 8 p.m. and Sept. 19 at 2. Written by Peter Macklin, the play concerns Adam, born Jewish, now a vehemently atheistic and progressive lawyer, who is assigned to defend Doreen, a devoutly Christian mother who is on trial for murdering her young child.

Mr. Macklin’s plays have been seen at the Clurman Theatre, New Circle Theater Company, and the Acting Company in New York City. He is the author of “Dinner at 40,” an award-winning short film that has played at festivals worldwide. As an actor, he has performed at Bay Street, Baltimore Center Stage, and the Glimmerglass Festival, among others.

The series has been organized by Hope Villanueva, Bay Street's literary manager, Scott Schwartz, its artistic director, and Will Pomerantz, its associate artistic director. Plays will be read by professional actors and accompanied by minimal staging. Question-and-answer sessions will follow each reading.

Masks and proof of vaccination will be required for entry, and seating will be arranged according to necessary health and safety guidelines. Tickets, at $20 per show or $65 for the series, are available from the website and the box office.