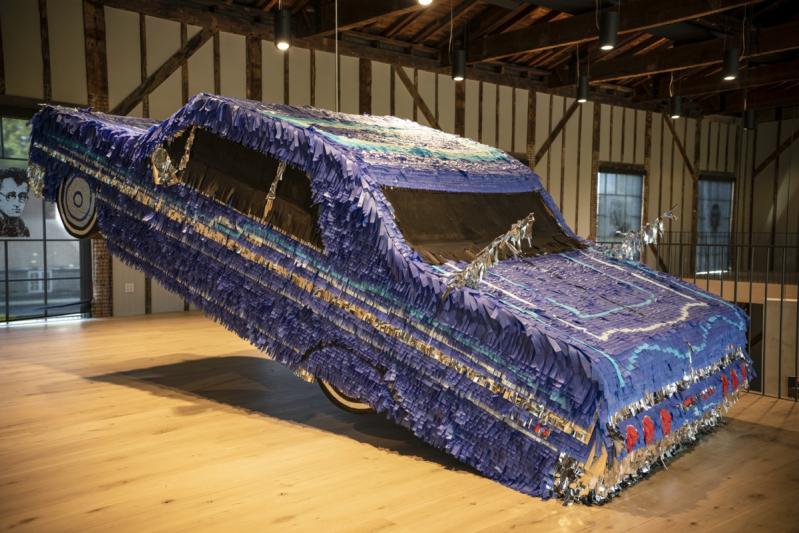 Justin Favela's "Blue Dream," which was built on site, is made of what the organizers call pinata materials -- found objects, cardboard, Styrofoam, glue, and layers of repurposed newspaper and magazines below, and decorative tissue paper on the surface.
By Jennifer Landes

It's hard to write about an installation at the recently opened arts space The Church without talking about the setting first and foremost. It's possible that will fade in time, but for now it still seems like the centerpiece, no matter how elaborate the artwork that is placed there.

The former Methodist church building has been restored to proffer a faithful facade to the Sag Harbor streetscape. Inside, it has been renovated to add contemporary style and functionality to a soaring interior and create exhibition, performance, library, and live/work spaces for its rotating residents.

Still, "Road Rage," its summer show, manages to steal some of the spotlight back, particularly with its large-scale sculptures and installation pieces.

Justin Favela's "Blue Dream," which was built on site, is such an example. The life-size car form is made out of what the organizers call pinata materials -- found objects, cardboard, Styrofoam, glue, and layers of repurposed newspaper and magazines below and decorative tissue paper on the surface -- and partially suspended from the rafters as if caught in mid-bounce.

Mr. Favela's home turf of Las Vegas feels right for this celebratory glitz-fest, which is joyful but also a serious reflection on Latinx popular and car culture. The curators note that it is not filled with candy. Yet it illustrates the serious ambitions that The Church's founders, April Gornik and Eric Fischl, and its director, Sara Cochran, have for the space. The wry observation that they don't know yet how they'll remove it from the building adds relatability to their lofty aims.

Peter Larkin is another name not immediately familiar, but his "Motorcycle," from around 1970, provides another big moment in the show. It has the same free-associative yet evocative quality of Picasso's Cubist sculpture, like "Guitar." The materials here are also quite removed from what the actual object would employ -- in this case, bamboo, other mixed media, and black paint. Its spectral quality and the way the rear wheel dissolves into sheer propulsion are also reminiscent of the implied speed and movement found in Futurism earlier in the 20th century.

The artist, whose day job was as a scenic and production designer for films and theatrical productions, was inspired to make the piece by Rollie Free's 1948 land-speed record of 150 miles per hour. The feat was accomplished with the midsection of the rider's body resting over the rear wheel and outstretched hands holding the handle bars over his head. His legs flared out behind the bike. The note about this badass triumph on the checklist given out at the front desk is its own exhibition highlight.

Another feat within itself is Malcom Morley's "Ring of Fire." Placed in an alcove on the mezzanine level, its installation makes the most of the subject matter's drama, whether looking at its motorcycle daredevil straight on from across the room or close-up from the side. The piece is another achievement of creative ingenuity, made entirely of paper in 2009.

And yet it doesn't stop there. If you're bored with paper vehicles, how about one made of clay? Kristen Morgin's "Wrecked Spyder" is a deconstructed ceramic frame of a car on a scaffolding of wood and wire. Consistent in her work is a sense of destruction, whether natural decay or other kinds of ruin. The clay skin she provides for the car's chassis is broken and cracked in ways that are evocative of a crash, but still provides other possible suggestions of catalysts.

Less showy in this context, but no less intriguing, is Sylvie Fleury's "Ford Cosworth," a cast car engine she made in 2000. The heavy bronze of the sculpture is overwritten by the chrome coating that gives it an eye-catching luster. This true shiny object recontextualizes a masculine emblem, giving it jewel-like allure. The curators note the actual Ford engine was the lightest built at the time, as well as the subversion inherent in choosing so weighty a medium. The car, built from 1986 to 1992, was a European version of the manufacturer's Sierra model.

There are other sculptures in the mix, the more expected John Chamberlain assemblages and Cesar's "Compressed Automobile," from 1970, both well chosen if anticlimactic.

The wall-mounted work is also well considered and offers some surprises. There are drawings, photographs, paintings, mixed-media pieces, and more by neighbors such as Mary Heilmann, Richard Prince, Cindy Sherman, and David Salle, and another impressive group of imported artists who provide surprising or satisfying takes on the theme.

A final bravura moment is supplied with the stop-motion animation of Matt Bollinger. "Between the Days" suggests various relationships and storylines, using the car as a means of arrival and escape from domesticity and work. The video comprises hundreds of photographs of modified paintings with a soundtrack of human activity, music, and some dialogue. Rather than slick and fast moving, the progression is ponderous and visually dense. The result is mesmerizing.

There are quite a few works on loan from one collector, just over a third of the 23, which raises a chicken or the egg question. The curators, Mr. Fischl and Ms. Cochran, said the show was inspired in part by the collection and grew from there.

The Church is open every day except Tuesday, weekdays from noon on and from 11 a.m. on weekends. Admission is free. The exhibition will remain on view through Sept. 20. On Monday at 6 p.m., Ms. Cochran and Mr. Fischl will host a conversation with Andrew Gardner, one of the curators of "AUTOMANIA" at the Museum of Modern Art in New York City, about why these car-centric shows appeared at the same moment. The talk is free and masks are required. More details are available at The Church's website.