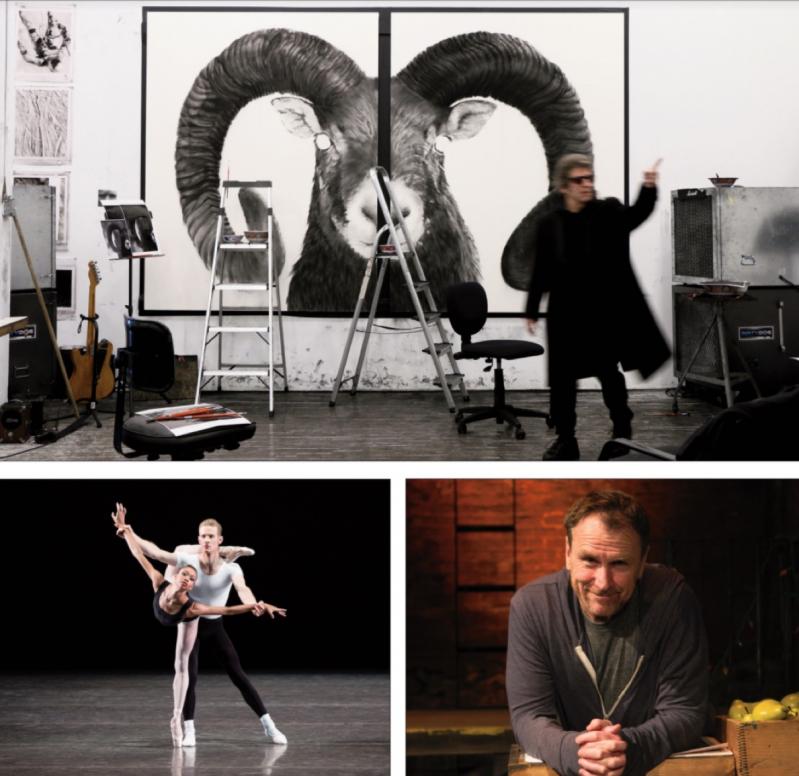 Some of the many programs of Guild Hall's 90th summer included, top, an exhibition of work by Robert Longo, seen in his studio, the New York City Ballet, which performed George Balanchine's "The Four Temperaments," and the comedy of Colin Quinn.
Paul Kolnik
By Mark Segal

After six years at the Parrish Art Museum and almost five at the Southampton Arts Center, Amy Kirwin scored a rare cultural trifecta when she was hired last February as Guild Hall’s chief creative officer.
Most people would have been challenged by the move from a relatively new cultural organization where she was responsible for programming, organizing exhibitions, and marketing, to a long-established institution where her role would have a different focus. Moreover, she was making the change during the uncertainty of a pandemic.

“It happened midwinter, so it was good timing as far as the transition went,” she said during a recent conversation outside Guild Hall. “Things were a bit quiet where I was leaving, and only gearing up coming here. I was able to get a grasp of everything that was to come, so I wasn’t overwhelmed by the time we hit the high season.”

What was to come was not only Guild Hall’s return to in-person programming for the first time in more than a year, but also the institution’s 90th birthday. As chief creative officer, a big part of Ms. Kirwin's job was developing a branding campaign for the celebration.

“When we heard the village was thinking of putting up banners along Main Street, we asked if we might be the first to do it.” After the village agreed, the banners were created with the intention of telling Guild Hall’s story from its founding to the present day.

“We figured taking people on a path through our history from here up to Main and Newtown, across Main, and then back to the library was a fun way of doing it.”

“I’ve worked in other places where there is rich history, but the history of Guild Hall is so impressive because it’s not just strangers coming and performing, it’s people who are part of the community. So they have a deep connection with Guild Hall, and that’s what makes what we do so much more special.”

Because of the pandemic, going into the summer all of Guild Hall’s programs were set to take place in the John Drew backyard theater, but, as protocols were relaxed, many of the events were able to move inside. “A really special thing that happened this summer is that in many cases we were where a lot of performers came back to performing for the first time with a live audience,” said Ms. Kirwin. “It was very emotional when we had the New York City Ballet, because several of the dancers had not performed in front of an audience since before Covid.”

Other highlights, she said, were Colin Quinn’s sold-out stand-up performance; “2020,” a star-studded evening of short plays directed by Bob Balaban, and a staged reading of “Crisis in Queens,” a new comedy by Joy Behar. And then there were the five performances by the comedian Mike Birbiglia.

“He knew he was going to be in town, and he wanted to work on new material for a show that’s going to be on Netflix. We became the testing ground for his new material, and people just loved it.”

Another high point of the summer was the opening of eAT, Guild Hall’s coffee bar, which Ms. Kirwin oversaw. “We worked really hard to make sure we incorporated local companies.” The coffee is from Sylvester & Co., wine from Wolffer Estate Vineyard and Bedell Cellars, food from Almond, and beer from the Montauk Brewing Company. The coffee bar is open during theater programs and gallery hours.

Before moving to the East End in 2010, Ms. Kirwin worked for 13 years in theaters in New York City, where she helped create and manage 59E59, a new theater complex, and worked for the Broadway League and the Tony Awards. After joining the staff of the Parrish in 2010, she first met Ms. Grover, who had been hired as the museum’s curator of special projects. Used to working long days and late hours in the theater world, after several months Ms. Kirwin was bored. “It was 9 to 5, and people left at the end of the day. I thought, what, you leave at 5?”

Interested in Ms. Grover’s programming and curatorial initiatives, Ms. Kirwin offered to help, and eventually developed and ran programs such as Music on the Terrace and Jazz En Plein Air. Her leap into programming prepared her for the job at the Southampton Arts Center.

As for the move to Guild Hall, “Andrea and I were always destined to reunite. When she approached me, the timing was right, and she had this opportunity that was restructured in order to cater more to me and my skills. So it’s focused on marketing and P.R. and branding, but there’s a broader creative role, almost advisory in a way,” that draws on her previous experience.

Ms. Kirwin admits missing programming at times, “because it’s really gratifying to see people enjoying something you’ve created.” But it was also exhausting, and she was ready, at Guild Hall, “to use my brain in a different creative way. I’ve been able to do that here.”

“It’s all very collaborative,” she added. “I might not be leading the charge programmatically, but, I can’t help myself, I might make an occasional suggestion. But my real focus now is helping to create the identity for Guild Hall as we go into the next 90 years.”

Looking ahead, Guild Hall has already embarked on a $10 million capital campaign. Most of that is earmarked for building renovations, but some will fund cutting-edge programming and a reserve fund. “But the plans are not set yet. That’s next year, details to come. We’re about halfway there.”

Meanwhile, now that summer is over, the staff has time to evaluate what they’ve done, what works, and what doesn’t. Ms. Kirwin is looking forward to having the time to reflect and strategize.

“I’m excited to be here at the precipice of this big change. It’s still Guild Hall, and it will always be Guild Hall, but we have the luxury now of doing so much better than we ever have and creating what will be the best experience people could possibly have. Not just on the East End -- we want this to be truly world class.”