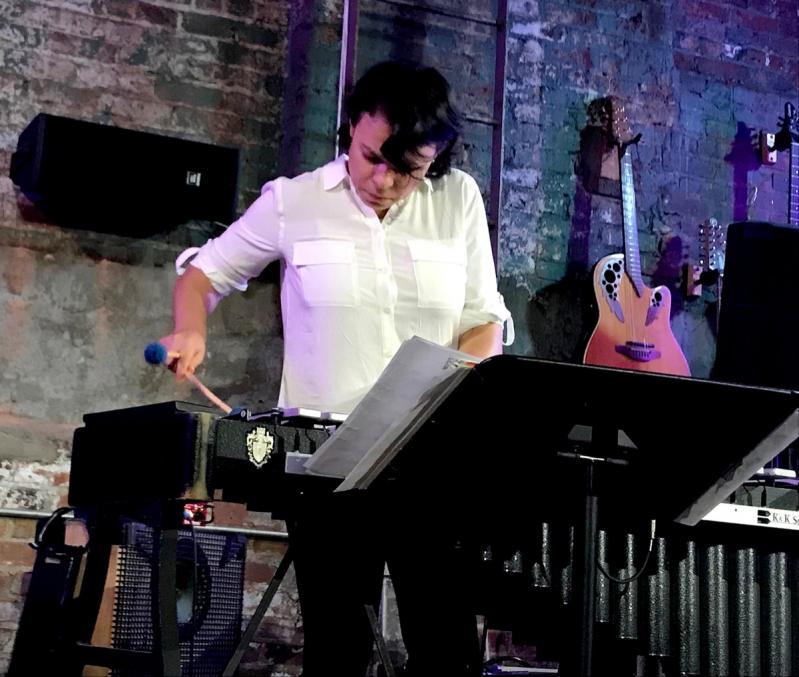 The vibraphonist Patricia Brennan will perform at the Arts Center at Duck Creek on Saturday.
By Mark Segal

The Changing Landscape
A documentary on bay houses in Nassau County and an experimental film that examines societal decay are coming up at Guild Hall.

"A World Within a World: The Bay Houses of Long Island," directed by Barbara J. Weber, explores the symbiotic relationship between nature and humankind. The film focuses on bay homeowners in Hempstead, who struggle to preserve longstanding traditions while routinely facing eroding marshlands and hurricane-strength storms.

Set for Sunday afternoon at 2, the screening will be followed by discussion with Andrea Grover, Guild Hall's executive director; Nancy Solomon, director of Long Island Traditions; the artist Daniel Pollera, and Ms. Weber.

The film "Apex Ape" is part of a multi-channel video installation that will be installed in Guild Hall's garden next Thursday from 7 to 9 p.m. Created by Brenna Leaver, Julian Alvarez, and Devon Leaver, Guild Hall's community resident artists, "Apex Ape" was inspired by interviews with East End residents and LTV's video archives.

The film's impressionistic cinematography treats the local landscape as a living organism, a rapidly changing habitat in which an illusive ape might make a surprise appearance. Viewers can enter the installation at any point throughout the evening.

Both programs are free.

Jazz at Duck Creek
The Arts Center at Duck Creek in Springs will present a free concert by Patricia Brennan, a Mexican vibraphonist and composer, on Saturday at 4 p.m. During the course of her career, she has shared the stage with Yo-Yo Ma and Paquito D’Rivera, performed internationally in Mexico, Vienna, and Buenos Aires, and, since moving to the United States, at the Newport Jazz Festival, Carnegie Hall, and SF Jazz.

JazzTimes said of her debut solo album, “Maquishti,” which was released in January, “Brennan is now carving out her own niche with her ethereal solo debut.” She will be accompanied by Noel Brennan on drums, Mauricio Herrera on percussion, and a bassist to be announced.

Classes at Bay Street
Bay Street Theater in Sag Harbor has announced four new workshops for adults. Wade Dooley, an actor and playwright, will host “Writing With Wade,” an eight-session class that will take place online Mondays at 4 p.m. starting on Monday. Participants will share their work weekly and receive feedback from Mr. Dooley and other class members. The fee is $250.

Also starting Monday is “Speaking With Influence: How to Identify, Strengthen, and Power Your Voice,” taught by Arielle Haller-Silverstone, an actor and voice, speech, and media coach. The eight sessions will take place in person at the theater starting at 7 p.m.

“The Basics of Singing II,” a six-session workshop taught by Amanda Jones, will start on Tuesday at 7 p.m. at the theater. Aimed at both beginners and more experienced singers, the class will focus on breathing, diction, song choices, and other elements of vocal expression.

Scott Baker, a seasoned standup comedian, will teach “Just for Laughs Improv” in person at Bay Street starting Wednesday at 7 p.m. and continuing through Nov. 17. The class will feature both short-form and character development improvisational techniques.

The fee for each of the in-person workshops is $200.

‘My Octopus Teacher’
The Southampton Arts Center will hold an outdoor screening of the Oscar-winning documentary “My Octopus Teacher” and a related panel discussion Friday at 7 p.m. Pippa Ehrlich and James Reed’s film focuses on a year spent by Craig Foster forging a relationship with a wild octopus in a South African kelp forest.

The panelists, Becca Franks, a research scientist, and Jennifer Jacquet, a professor of environmental studies, will discuss the octopus’s extraordinary intelligence, the current state of octopus farming, and ethical and environmental issues related to keeping the marine animals in captivity. The screening will follow the discussion.
Preregistration for the free program is required, and guests have been asked to take their own seating. In the event of rain, the program will be moved indoors.

This article has been modified from its print version to reflect the starting time of 4 p.m. for the concert at the Arts Center at Duck Creek, which was announced too late for the print edition.