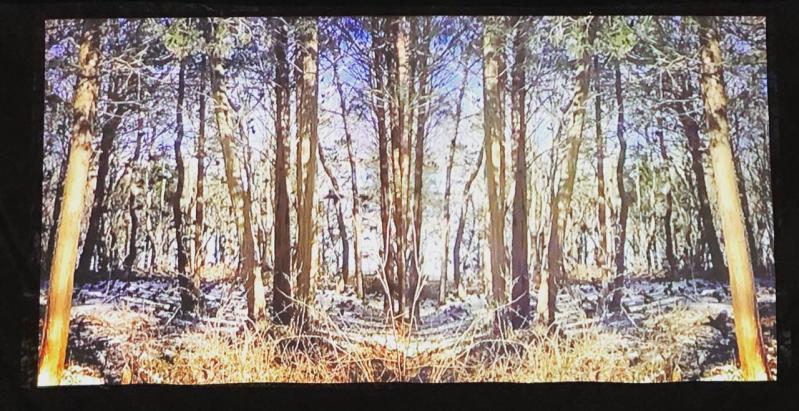 Jill Musnicki's video installation is part of "The Garden of Friends" exhibition at the Leiber Collection.
By Mark Segal

Enchanted Evening
The Leiber Collection will present  "An Evening of Art, Light, Projections, Music and more..." in its sculpture garden on Saturday from 5 to 8 p.m.

Laurie Lambrecht, Margaret Garrett, and Scott Bluedorn will discuss their new work in "The Garden of Friends" exhibition. They will be followed by the band Alpha Gal, whose members are Christine Sciulli, Renee Gaudino, Holly Li, Hailey London, Nika Nesgoda, and Laura Eisman. They will perform a short set of covers of bands like Radiohead and Florence and the Machine. As the sky darkens, works incorporating light by Jill Musnicki, Scott Bluedorn, Conrad de Kwiatkowski and Ms. Sciuilli will illuminate the garden.

The indoor museum show "Centennial Legacy – A Celebration of the Life, Love and Art of Judith and Gerson Leiber" will remain open until 5 p.m. for those arriving early. Tickets are available by voluntary donation on Eventbrite.

Street Artists
"Art of Darkness," a show of work by the street artists Banksy, Blek Le Rat, and Richard Hambleton, is on view at Chase Contemporary in East Hampton through Oct. 10.

Known as one of the pioneers of stencil graffiti, Mr. Le Rat, a French artist, first came to New York in 1981, where he was inspired by the graffiti on the subways and by the public work of Hambleton, who gained notoriety for his "Shadowman" paintings of that decade.

The British artist Banksy is known for putting his work in difficult places and for the importance of the rat as a subject. He has cited Hambleton and Mr. Le Rat as inspirations. His famous "Haight Street Rat" from 2010 is included in this exhibition.

Talking Early Roy
The Parrish Art Museum is presenting three noon talks by Alicia Longwell, its chief curator, about the early work of Roy Lichtenstein, which is the subject of the current exhibition "Roy Lichtenstein: History in the Making, 1948-1960."

This week's topic is the artist's "Self-Portrait at an Easel" (1951-52), which evokes early Renaissance style with folk-art flourishes and features its subject crowned by a bowler hat.

Subsequent talks will focus on Lichtenstein's appropriation of characters and artworks from America's mythic past (Sept. 30) and his participation in the New York art world of the late 1950s (Oct. 7).

Longo's Vision
Christina Mossaides Strassfield, Guild Hall Museum's director and chief curator, will lead a free tour of "A History of the Present," the current exhibition of work by Robert Longo, on Saturday at 3 p.m.

Mr. Longo's 17 monumental charcoal drawings juxtapose America's past and present. His "Gang of Cosmos" series is based on prominent paintings from the Abstract Expressionist movement, while "The Agency of Faith" presents images that pose questions about our current national and environmental narratives.

"A History of the Present" will be on view through Oct. 17.

Southampton Solos
MM Fine Art in Southampton will present concurrent solo shows of work by Janet Culbertson and Anna Jurinich from Saturday through Oct. 11, with a reception set for Saturday from 5 to 8 p.m.

“Long Island Landscapes Revisited” features paintings by Ms. Culbertson that contrast the Long Island of the 1960s with her vision of the Island today. An environmentalist for more than 50 years, much of her artwork has focused on pollution and other threats to the natural environment.

“My Here and Now” includes a selection of Ms. Jurinich’s still life and flower paintings as well as more surreal images, such as “The Coming and Going,” which depicts two female figures who seem to be floating in space.

“Lolita” Two Ways
“Bert Stern Loves Sag Harbor,” an exhibition of photographs of the actress Sue Lyon as Lolita, will open Friday evening at Keyes Art in Sag Harbor with a reception from 5 to 7. A screening of Stanley Kubrick’s film of Vladimir Nabokov’s controversial novel will follow at 7:15 at the Sag Harbor Cinema.

Kubrick asked Stern to photograph Lyon when he needed promotional shots of her for the film. Stern photographed the actress at the American Hotel and Baron’s Cove in Sag Harbor, using props that included the iconic heart-shaped sunglasses he purchased at Sag Harbor Variety.

The exhibition will run through Oct. 8.

Four at White Room
“Impression,” an exhibition of work by four artists, is on view at the White Room Gallery in Bridgehampton through Oct. 31. In keeping with the theme of the show  -- movement -- Stuart Yankell’s paintings capture dance, music, surfing, and other kinetic subjects.

Bob Tabor, a photographer, is known for his equestrian portraits and seascapes. Fragments of posters on the walls of Lyon, France, provide the material for Sylvie Perrin’s collages, while the patterns in Dorothy Ganek’s paintings reflect her training as an interior designer.

Rocking Photography
An exhibition of work by Roger Sichel opens at Romany Kramoris Gallery in Sag Harbor Thursday, and will remain on view through Oct. 14. A reception will take place Saturday from 5 to 6:30 p.m.

Mr. Sichel produced rock concerts with the Doors, the Four Seasons, and Isaac Hayes, and, as a photographer, documented the music scene of the 1960s and ‘70s. More recently he has used digital photography to create images inspired by his own life as well as current events.

A map and more information are available at the alliance's website.

Rosenthal Auction
The sculptor Tony Rosenthal is perhaps best known for his 15-foot-high rotating sculpture "Alamo," also known as "The Cube," which has been installed on Astor Place in Manhattan since 1967. East End residents might recall his "Cube 72," a similar work that was sited on the front lawn of Guild Hall for many years.

On Saturday morning at 10, Roland Auctions in Glen Cove will hold an auction of works by the artist, who lived in Southampton for 25 years until his death in 2009. The pieces range from small cast bronzes to mid-size maquettes to large outdoor sculptures, all made available by the artist's estate.

Rosenthal is represented in the collections of many institutions, among them the Museum of Modern Art, the Whitney Museum, the Guggenheim Museum, and the Los Angeles County Museum of Art.