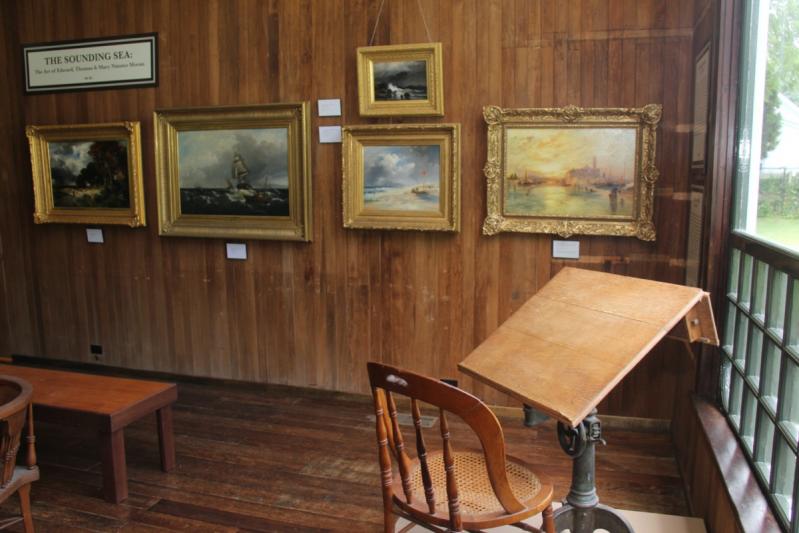 A view of the main exhibition area where Edward, Thomas, and Mary Nimmo Moran's seascapes, often inspired by East End locales, are on view.
Durell Godfrey
By Irene Silverman

If you've never been inside the Thomas and Mary Nimmo Moran Studio, now is a good time to visit, not only to view the current exhibition of stunning marine paintings and etchings by Edward, Thomas, and Mary Nimmo Moran -- "The Sounding Sea" -- but also to see the house itself.

No one living here should miss it.

Twelve years ago, the 1885 building was a shambling wreck, a blot on a stretch of handsome old houses at the entrance to East Hampton Village, whose only saving grace was that its setting, across from Town Pond but far back from Main Street, made it almost invisible.

In 2018, thanks to the good offices of innumerable people -- artists, architects, historians, local officials and old families, federal agencies, philanthropists, preservationists, and craftsmen (all led by Richard Barons, curator of the East Hampton Historical Society and director of the Thomas Moran Trust, and Robert Hefner, the village's former director of historic services) -- the fully restored building, now heated, air-conditioned, fireproofed, and equipped with, of all unlikely things, an interactive touch screen, opened to the public.

The screen is in the very back of the house, the last room you're likely to enter. It couldn't very well have been put anywhere else -- a newfangled information-processing system among Victorian period furniture? -- but those who are unfamiliar with the house might want to go straight there, as it orients you as to what to look for.

The main room, which, with its soaring triple-height ceiling and Brobdingnagian fireplace, is where Thomas Moran created many of his large-scale canvases by the northern light coming through a semicircular leaded-glass bay window. (Find the stranger-then-fiction story of that window on the touch screen.)

Edward Moran, the elder brother of the far more famous Thomas, gets pride of place in this show with an arresting oil of a wave-tossed three-master, displayed on a centrally located easel in the main room. Artists who visit the exhibition, said Mr. Barons, its curator, "are responding to Edward's brushwork, the light on the water and how he gets that greenish cast. You see it all the time when you go to the beach, but how many artists do that?"

Edward's work was in demand at the end of the 19th century, but the younger brother soon eclipsed him. "Edward was famous in his time, but his scenes of New York Harbor and three-masted ships have become less valuable," Mr. Barons said.

All around the main room are artifacts of the 1880s and '90s, some on loan from local residents, some from the historical society's extensive collection, some original to the house, and some, including an 1890 toilet from Oneonta, N.Y., acquired on eBay.

For this observer, who saw the show in Mr. Barons's company, the artifacts, each with their own tales to tell, are almost as compelling as the artwork. A massive Duncan Phyfe sideboard lent by a Southampton family is one stunner. "Notice its crotch mahogany," Mr. Barons said, not needing to elucidate. "It makes a wonderful pattern."

A long stretch of wall facing you across the room, up above the major artworks and the cornice, is oddly blank -- all whitish. Somewhere far from here, craftspeople are almost finished reproducing the original fabric that covered that space, a Victorian riot of small flowers. A scrap of the original muslin, block-printed in India, was found during the renovations -- the Morans would never have left that wall empty, said Mr. Barons -- and "luckily, we have the photos showing the fabric." Ruth Moran, the youngest Moran child, who inherited the house and everything in it, left the family photos and artwork, among other precious things, to the East Hampton Library upon her death in 1947.

Edward, Thomas, and Mary Nimmo Moran all painted seascapes, often taking their inspiration from East End locales -- Three Mile Harbor, Georgica Pond, the Hook Pond bridge, the ocean. While Edward was focused on maritime art, "Thomas, wherever he went, was interested [also] in landscapes," Mr. Barons said. "He is a more consummate artist. His drawing and his color sense are extraordinary, and he is always able to capture the moment."

But it was Mary, Thomas's wife, whose delicate etchings I stopped before the longest.

"All of a sudden there's a lot more interest in Mary," Mr. Barons remarked. "Her etchings have an intimacy and a freshness. I find that people who like art are responding to the etchings."

In a narrow back room is the house's original garden sink, which Mary used for flower arranging. The Morans had an extensive garden, now replicated to perfection from the old photos. This past spring, said the curator, deer pushed through the garden fencing and destroyed every hollyhock. "Hollyhocks were her favorite flower," Mr. Barons said mournfully.

She could have been standing right there by his side. The Moran House may be a museum now, but there are no velvet ropes, no signs warning to stand back, no charge -- just an extraordinary building once occupied by an extraordinary family and a showplace for fine and decorative art.

"The Sounding Sea" will be on view on Saturday, 11 a.m. to 3 p.m., and next week from Wednesday through Sept. 12, after which the building will be closed until Christmas.