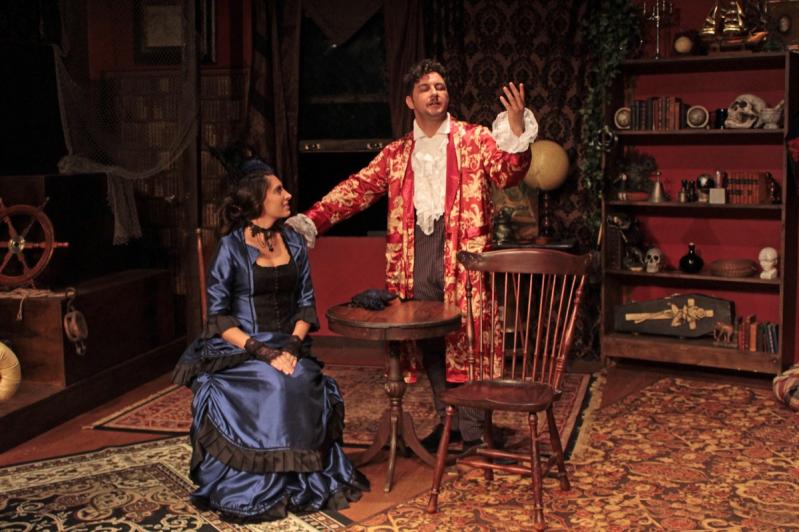 Like so many cultural programs, the Boots on the Ground Theater company’s production of “Sherlock’s Secret Life” opened at the Southampton Cultural Center in early March of 2020, only to close a week later. After 18 months in limbo, the production will launch a three-and-a-half week run at the center tomorrow.

Written in 2002 by Ed Lange, the play begins with an aging Dr. Watson, who has decided to tell the story of his friend and colleague’s first case, which involved a beautiful young woman who'd lost her memory. Holmes’s archenemy, Professor Moriarty, figures in the story, as do two familiar characters from the sleuth’s world, Inspector Lestrade and Mrs. Hudson.

The theater company was founded in 2016 by Bonnie Grice, who was for many years a host and producer at the former WPPB-FM. Her fascination with the Victorian era and detective stories sparked her search for Sherlock Holmes scripts. While many were “a bit old and dusty,” she said at the time, “Sherlock’s Secret Life” appealed to her because of its blend of mystery, murder, love, and comedy.

A review in The Star of the pre-pandemic production noted that the playwright “handles the characters and all of the play’s moving parts deftly, and the action never flags. His strongest points are his clever and often over-the-top dialogue and his deployment of old Watson as a sagacious and rueful framing device.”

The revived production is directed by Josephine Teresi-Wallace, while Ms. Grice pulls off a triple play as producer, designer of the late-19th and early-20th-century interiors, props, and costumes, and as Holmes’s prickly landlady.

In addition to Ms. Grice, the cast includes Ken Dorph as the older Watson and the narrator; Mark Heidemann as Professor Moriarty, Tom Rosante as Holmes, Alyssa Kelly as Marianna, the woman in distress, and Richard Gardini as Lestrade.

In keeping with the company’s mission of including student actors in its productions, two Pierson High School students, Zoe Richardson as Mollie and Lance Schroeder as the young Watson, round out the cast.

“Sherlock’s Secret Life” will be performed Fridays and Saturdays at 7 p.m. through Oct. 10. Tickets are $25, $15 for students under 21, and can be ordered online, over the phone, or at the door. Advance reservations have been recommended.