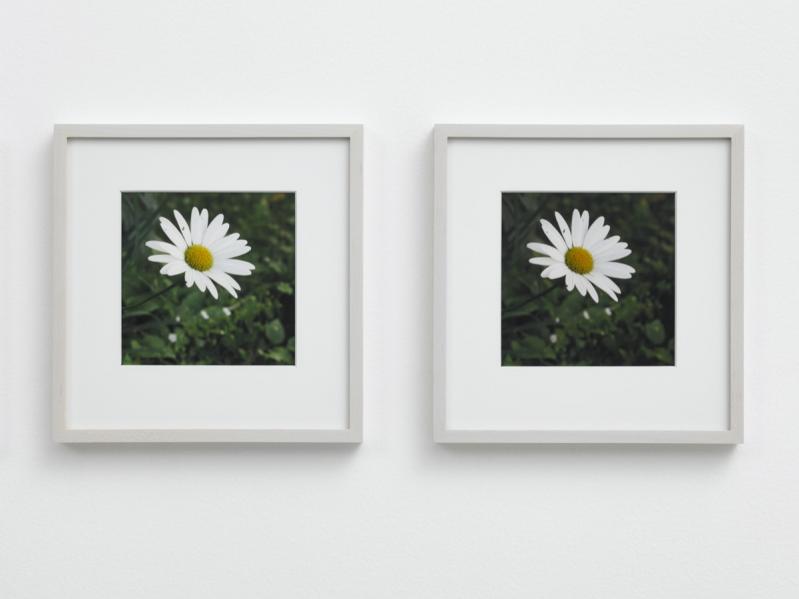 Spencer Finch takes a conceptual approach to his appreciation of flowers in pieces such as "The Daisy Follows Soft the Sun," of which two images of 13 are shown here.
By Jennifer Landes

Even with its multiple bravura moments and eye-catching follies, the gardens at the Madoo Conservancy in Sagaponack can sometimes lead a visitor to take them for granted, even on a first visit.

It is helpful to have a reminder to stop and really look, notice the details, and reflect and meditate on them. Enter Spencer Finch, whose exhibition "This room needs flowers" is now on view in the gallery. In a few powerful pieces, he reminds viewers to pause, take note, and actually see not only his work but the world around them.

Using minimal means to maximal effect, he breaks down complex issues of temporality into visual forms that delight in their ingenuity. Each piece works on its own, but in this room, using a variety of mediums, he dazzles in the way he conveys complex notions with uncomplicated forms.

Take "Falling Linden Leaf." On a single sheet of Japanese rice paper, Mr. Finch applied a woodblock print of the leaf in each section he created by folding and cutting the paper to produce a small cascading effect. In this rudimentary and minimal way, he translates a natural phenomenon into a static two-dimensional form that still implies a movement through time and space while taking on a third dimension.

It is the kind of moment that if it happened in a performance, the audience would break out into spontaneous applause. But it works only when the viewer invests the time to perceive all of its complexity. The beautiful golden and somewhat variegated color and the shape of the printed leaves and the simple installation do a fine job of pulling one into its orbit. The rest is up to the beholder.

Even more direct is "The Daisy Follows Soft the Sun," from 2017. Here, the viewer can sense some variation over the 13 photographs of exactly the same daisy in exactly the same format to understand that they are individual images taken over time. If you can't see the slight differences in light and depth of color or the very slight movement of the daisy toward the light, the artist provides a description of the piece that notes the photos were taken at hourly intervals during the course of a day.

The title comes from a poem by Emily Dickinson, with whom Mr. Finch has been engaged for many years, primarily for her descriptions in words of the light she saw around her home in Massachusetts. As Susan Cross noted in the 2016 monograph on Mr. Finch that she edited, "The Brain Is Wider Than the Sky," light and the color of light "are ultimately the subjects that fascinate Finch and those that he returns to again and again -- along with the perceptual, physiological, psychological, and linguistic workings that influence how we experience them." He tackles these subjects through the prisms of science, philosophy, and literature in addition to art.

This multidisciplinary approach, particularly as it relates to language, is one of the artist's signature strategies. It relates as well to the title of the show, a line from "Afterward," a poem by James Schuyler, who was a close friend of Robert Dash, Madoo's founder.

Mr. Finch consistently underlines ways in which everything is interrelated. As a further example, he applies the same approach to the sun and its passage over the garden on a given day to a completely nonobjective exploration of how it affects the color, and just the color, of strawberries. In the piece "Still Life (Strawberries) morning effect, noon effect, afternoon effect, and evening effect," from 2016, four sheets of paper are painted in watercolor patches in a very similar but not exact pattern.

Like the Impressionists, he translates how he sees light's movement over objects into artistic form, but he has taken it to another place, one of pure impression blended with conception. The patches have both radical and subtle changes in tone, depending on how they are compared. It's another chance to think about how those differences and similarities in tone and hue over time in the distilled daubs can be extrapolated onto the always colorful Madoo landscape and structures.

His other pieces in the show, 2016's "Falling Cherry Blossoms" and "Blooming Calendar (my garden)," from 2020, provide further fixed images of organic processes. With the cherry blossoms, he traced the paths of falling petals by placing acetate over a screen on which a video he recorded of the activity played. Using the fallen petals collected as a color guide, he transferred those paths into pink watercolor lines on paper.

The calendar records the first dates that certain flowers bloomed in his upstate garden during the Covid-19 shutdown. Using colorful dots, the resulting work documents a process in a way that is far more thought-provoking and memorable than a simple reproduction of blooming flowers.

The exhibition remains on view through Friday, Sept. 24.