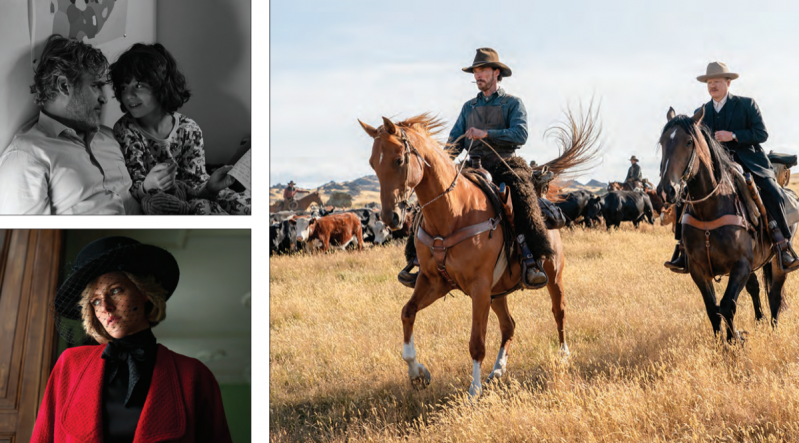 HamptonsFilm has announced the full lineup for its October film festival, which includes the following, all planned to be screened in theaters: "The Power of the Dog," right, "C'Mon C'Mon," top left, and "Spencer."
By Jennifer Landes

HamptonsFilm released its full slate of films yesterday for its annual Hamptons International Film Festival, reigniting the energy of live screenings along with the more expected anticipation of Oscar buzz that comes with many of its marquee selections.

"Spencer," a melodrama by Pablo Larrain, the director of "Jackie," is about Princess Diana, who was born Lady Diana Spencer, at a pivotal moment in her marriage. Starring Kristen Stewart, it will be shown as the Saturday Centerpiece film. "Mothering Sunday," Eva Husson's exploration of passion and grief in the period between world wars, had previously been announced as the Sunday Centerpiece film.

The festival opens with "The First Wave," a documentary by Matthew Heineman, capturing New York City in the first months of the pandemic through the eyes of a group of doctors, nurses, and patients on the front lines of care. Wes Anderson's latest, "The French Dispatch," will serve as the festival's closer. The film features an ensemble cast with Frances McDormand, Willem Dafoe, Timothee Chalamet, Tilda Swinton, Saoirse Ronan, Bob Balaban, Owen Wilson, and Bill Murray. Its stories mirror those in the final edition of a magazine published by a Kansas newspaper in France.

The festival's spotlight films, which are typically slated for release by major distributors, include the work of famous international directors such as Jane Campion, whose "The Power of the Dog" stars Benedict Cumberbatch and Kirsten Dunst in a story set in early-20th-century Montana among cattle ranchers. It is already on best picture and best actor forecasts for this year. Pedro Almodovar's "Parallel Mothers" examines two women's short but intense bond formed in a Madrid maternity ward, starring Penelope Cruz (a potential best actress nominee) and Milena Smit. Joe Wright's version of "Cyrano," starring Peter Dinklage, Haley Bennett, and Kelvin Harrison Jr., recasts the classic in the director's characteristic modern sheen.

Maggie Gyllenhaal's directorial debut, "The Lost Daughter," stars Olivia Coleman and Dakota Johnson in an adaptation of Elena Ferrante's novel about an academic who encounters a sinister family on vacation. In Rebecca Hall's debut as a director, "Passing," two Black women with light skin navigate racial identity politics during the Harlem Renaissance. It stars Tessa Thompson and Ruth Negga. Mike Mills's "C'Mon C'Mon," with Joaquin Phoenix, and Clint Bentley's "Jockey," about an aging and ailing rider training for his last season, had been announced previously. "Jockey" may receive awards attention for its lead, Clifton Collins Jr.

The planners expect to screen all of the films for live audiences. As a result, they have extended the festival's duration to Oct. 13. Normally, the festival ends on Columbus Day. This year it will end on a Wednesday to address capacity limitations in the screening venues.

Anne Chaisson, the executive director of HamptonsFilm, said proof of vaccination and masks in all indoor venues will be required to attend. "We are so excited to share these wonderful films with our audiences and welcome them back to the cinema in a responsible way."

The program features a mix of films, in which 53 percent are female-directed and 34 countries are represented. It was also announced that the recently renovated Sag Harbor Cinema will be one of the venues, with a surprise screening of "one of the biggest hits from the Cannes Film Festival" at 8 p.m. on Oct. 8.

The festival's Conflict and Resolution section will highlight the very topical "Flee," by Jonas Poher Rasmussen, about an Afghan refugee who escaped his country as a teen. JR's "Paper & Glue" is a multi-country examination of marginalized populations, given new attention through the street artist's monumental projects.

Views From Long Island will feature Kelcey Edwards's previously announced "The Art of Making It," about the struggles visual artists go through to make a living in a fickle market. The Compassion, Justice & Animal Rights program has two films, both East Coast premieres: Andrea Arnold's "Cow" and Garth de Bruno Austin's "The Last Horn of Africa." The Air, Land & Sea program will have the New York premiere of "Becoming Cousteau" by Liz Garbus.

The festival's shorts section will feature six programs: the narrative and documentary competition categories, the annual Women Calling the Shots section from New York Women in Film & Television, the University Short Films showcase, the Views From Long Island showcase, and This Will Be Our Year.

Several of the films announced will have their world premieres at the festival. These include both features and shorts: "The Art of Making It," "Bill Mauldin: If It's Big Hit It," "Found," "The First Wave," "Glass," and "Prayers for Sweet Waters." North American premieres include "Good Mother" and "Great Freedom." There are also New York feature premieres such as "Becoming Cousteau," "Clara Sola," "A Cop Movie," "Listening to Kenny G.," and "The Real Charlie Chaplin." The New York shorts premieres are "Anita," "Bad Omen, "Buzzkill," "Pure," and "Unity Mosque."

Passes are available for sale on the festival website; individual tickets go on sale Sept. 27.