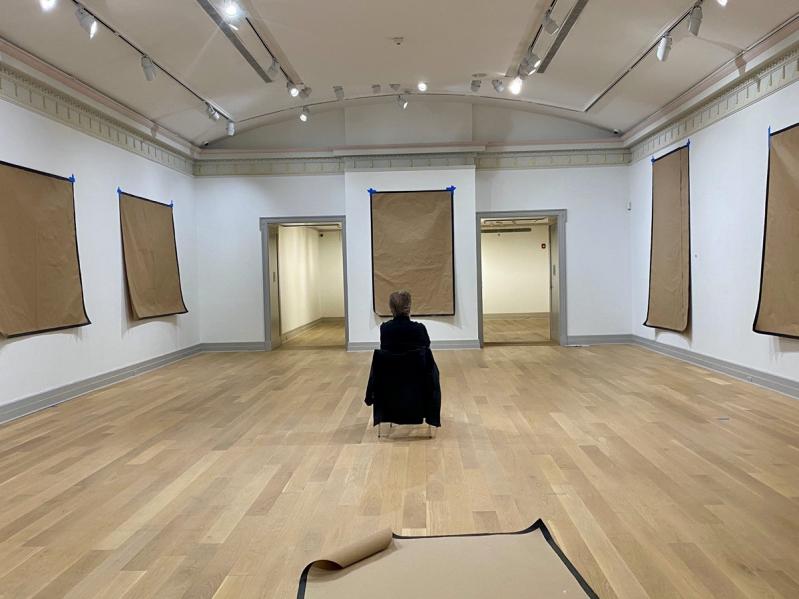 Robert Longo in the exhibition space in Guild Hall, from a documentary by Sophie Chahinian for the Artist Profile Archive
By Jennifer Landes

Robert Longo's installation of monumental charcoal works on paper, "A History of the Present," can be seen at Guild Hall beginning Saturday.

The two-part exhibition focuses on the Abstract Expressionist works he painstakingly recreated in charcoal, most about a decade ago, and called the "Gang of Cosmos" series. A number of new works from "The Agency of Faith," in the same medium and reflecting our current moment, makes up part two.

The "Gang of Cosmos" drawings feature some of the most successful and famous works from Abstract Expressionists such as Lee Krasner and Jackson Pollock, Willem de Kooning, and Joan Mitchell, artists who are also known for spending significant amounts of time on the South Fork.

Like the original Abstract Expressionist works, which in their own time were said to have been a reaction to the atom bomb and its devastation, the recent subject matter he has chosen also demonstrates ways in which America has been destructive in its history.

The images Mr. Longo has reconstructed for this series are representative of national historical and contemporary failures in terms of race, societal needs, and the environment. Pictures of cotton fields, a protest for George Floyd, and a Native American headdress join depictions of a giant wave, jellyfish, and a dead bird.

As he said to The Star in May, the recent series is not so reverential of the original photographic image. "I've manipulated them. They're not based upon the original. I'm trying to make the perfect version of these images in that sense." His intention is to leave a longer imprint on the memory than the hundreds of images we are bombarded with every day.

A full feature on the artist and the exhibition was published in the July issue of East magazine.

Tomorrow's summer gala will offer a preview of the exhibition as well as a tribute to Mr. Longo for his work in recruiting 60 artists to donate works for "All for the Hall," a benefit exhibition held last summer to raise money for Guild Hall during the pandemic. Cocktails, dinner, and dancing at a private residence will follow.

A screening of a documentary film on the artist will accompany the exhibition along with a talk on Aug. 31 with Mr. Longo and Sophie Chahinian, who made the film, and Christina Strassfield, Guild Hall's chief curator, moderating.

Other exhibition events include a conversation between Mr. Longo and the artist Shirin Neshat on Aug. 17, followed by a screening of the black-and-white release of Mr. Longo's 1995 film "Johnny Mnemonic." Ms. Strassfield will offer a gallery tour on Sept. 25.

Reservations for the exhibition events and tickets for the gala can be accessed on Guild Hall's website.