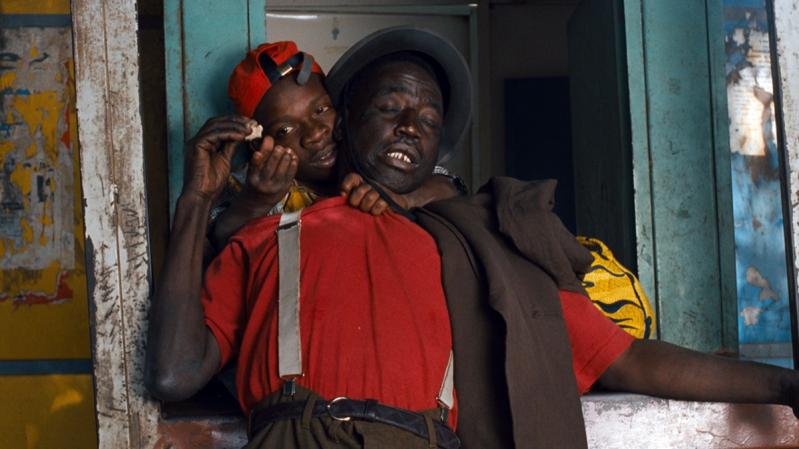 Dieye Ma Dieye plays a broke musician who makes the mistake of gluing his lottery ticket to a wooden door--before learning he won--in "Le Franc."
By Mark Segal

Films and Talk in Sag
The Sag Harbor Cinema, in collaboration with the Bridgehampton Child Care and Recreational Center and the Black Film Festival, will present “Mambety x 2,” a 90-minute program of two medium-length films by the late Senegalese filmmaker Djibril Diop Mambety, this evening at 7.

“Le Franc” (1994) is the story of a shantytown musician who, after winning the lottery, realizes he has glued the ticket to his door, which he must then take with him on a mishap-ridden journey to cash it in.

In “The Little Girl Who Sold the Sun” (1999), Sili, a 12-year-old paraplegic who walks on crutches, dares to break into the all-male world of newspaper vendors in Dakar.

On Sunday at 4 p.m., the cinema will host a discussion with Donnamarie Barnes and David Rattray, co-directors of the Plain Sight Project. It will be moderated by Jennifer L. Morgan, a professor of history at New York University and the author of “Reckoning With Slavery, Gender, Kinship, and Capitalism in the Early Black Atlantic.”
This summer, the project launched a yearlong examination of the history of the enslaved and free people of color of Sag Harbor and the area’s relationship to slavery in the North.

Pollock Opera
The Arts Center at Duck Creek in Springs will present an eight-piece workshop performance of “Portrait and a Dream,” a new opera about Jackson Pollock that will be performed by the music ensemble Contemporaneous, on Saturday evening at 6.

The composer Brian Petuch drew from interviews and conversations with Pollock to build what the center called “a musical imagination of the creative life of this compelling artist.”

The free program coincides with “Picasso in Pollock,” the current exhibition at the Pollock-Krasner House and Study Center in Springs.

Opera Al Fresco
Eve Queler, the artistic director emerita of the Opera Orchestra of New York, will return to LongHouse Reserve in East Hampton on Saturday for an evening of opera on the venue’s grounds. The event will celebrate the lives of Jack Lenor Larsen (1927-2020), LongHouse’s founder, and of the artist Ingeborg Ten Haeff (1915-2011).

Ms. Queler will be joined at the piano by Matthew White, a tenor, and Teresa Castillo, a soprano. The concert will feature compositions by Donizetti, Puccini, Verdi, Gounod, and Mascagni.

The evening will kick off with a cocktail reception at 6, followed by the benefit concert at 7. Tickets are $100, $75 for members, and can be purchased on the LongHouse website.

The Birth of Disco
The birth and growth of the disco movement in the early 1970s in New York City will be the focus of an event at the Eastville Community Historical Society in Sag Harbor on Saturday, starting at 1 p.m.

Guests have been invited to wear their dancing shoes, as D.J. Infmatick will be spinning disco music. Light bites, cocktails, and a Hustle dance demonstration will be part of the festivities.

The centerpiece of the program will be a conversation at 3 p.m. between Harriette Cole, a writer and radio personality, and Noel Hankin, the author of the new book “After Dark: Birth of the Disco Dance Party.”

Mr. Hankin founded The Best of Friends, a business that promoted discotheques in New York starting in 1971. Three of their clubs, Leviticus, Justine’s, and Bogard’s, were among the first Black-owned clubs in midtown Manhattan.

Cocktails and hors d’oeuvres will be on offer, along with the products of several exhibitors, including Signature Blends by KF, Stella and Ruby Jewelry, and Sara Shala Collection. D.J. Fly Girl Tunes will provide the dance music, and the evening will conclude with a fashion runway show with the designers Cesar Galindo, Brochu Walker, Culture Tree, and House of Barretti.

A yacht brunch will take place from 2 to 4 p.m. on Sunday. Tickets, available on the center’s website, are $125 for Saturday evening, $175 for the Sunday brunch.