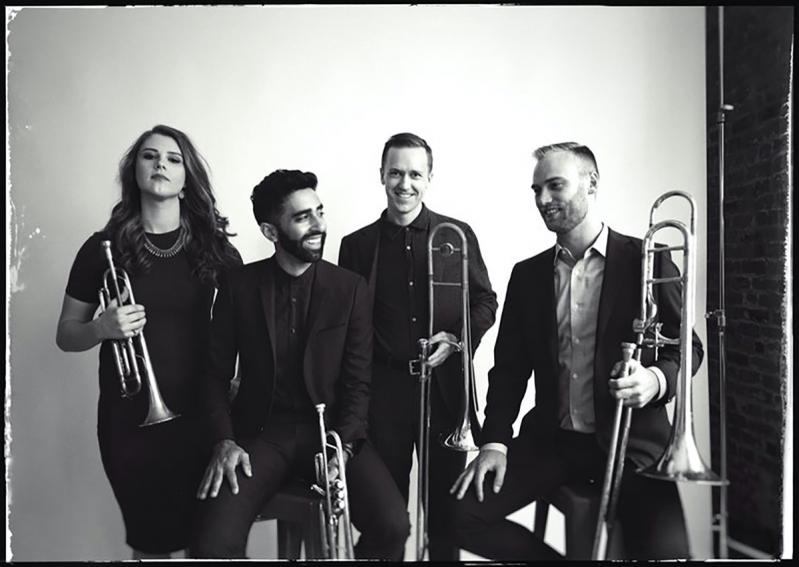 The Westerlies will perform at the Arts Center at Duck Creek in Springs.
By Mark Segal

Music at Duck Creek
The Arts Center at Duck Creek in Springs will present a free concert by the Kalia Vandever Quartet and the Westerlies on Saturday at 5 p.m. Ms. Vandever is a trombonist, composer, and educator based in Brooklyn whose debut album, "In Bloom," features all of her original compositions written for quartet and duo with guitar.

The group, which will perform music from “In Bloom” as well as more recent compositions, also includes Lee Meadvin on guitar, Eva Lawitts on bass, and Connor Parks on drums.

The Westerlies are a brass ensemble working at the intersection of classical music, jazz, and pop. Formed in 2011, the self-described “accidental brass quartet” of childhood friends from Seattle takes its name from the prevailing winds that travel from the west to the east.

The band members are Riley Mulherkar and Chloe Rowlands on trumpet and Andy Clausen and Willem de Koch on trombone.

Profiles in Courage
The Southampton Arts Center will present Mountainfilm on Tour Southampton, a program of eight short documentaries, Friday at 7:30 p.m. on its west lawn.

“This year’s films were selected to offer a glimpse into the lives of courageous people from around the world,” said Elyn Kronemeyer, who has been organizing the tour for seven years.

The films’ subjects include a little boy who must overcome obstacles to take his sister to school in a Mexican slum, and a man who guided Martin Luther King Jr. on a fishing trip just days before he was assassinated. Tickets are $15, $10 for members. Guests have been advised to take their own seating.

Thursday at 7 p.m., Steven Stolman, co-author of the new book “Bill Cunningham Was There,” will talk about the photojournalist and sign copies of the book. The program is free.

“The Tribeca Channel captures the spirit of the festival and our beloved New York,” said Jane Rosenthal, the co-founder and C.E.O. of Tribeca Enterprises and the festival. “Viewers of the channel will be able to enjoy the festival’s unique programming all year round.” The channel includes 114 movie titles and will refresh with new content every 30 days.