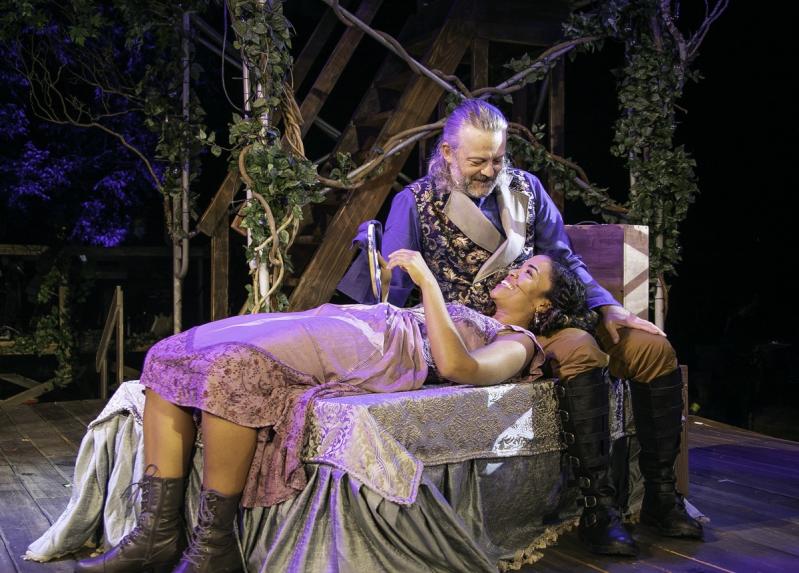 The setting is spectacular, the open field across from the Bridgehampton Commons, where Bay Street Theater is performing "Camelot" outside under the stars. In the "Camelot" of the classic Alan Jay Lerner and Frederick Lowe musical, "the climate must be perfect all the year." Unfortunately, Bay Street has no such superpower. I was rained out on my first attempt, but scored an absolutely flawless summer evening on my second.

How much you enjoy this performance will have a lot to do with your taste for classic Broadway-era nostalgia. In truth, "Camelot" has not aged particularly well. And if this solid, well-performed version seems weighed down somehow and never really takes off, it may have to do with the heavy lift of dragging a slightly fusty musical into contemporary relevance.

Arthur is the king of Camelot, a paradise of balanced laws and perfect weather. Arthur is also a benevolent ruler, obsessed above all else with fairness and decency. Strolling through the kingdom one day he meets a woman, also alone, named Guenevere. They strike up a brief conversation in the middle of which Guenevere suddenly asks him if he is going to ravish her right there in the woods. Of course not, Arthur replies, he wouldn't think of it. To which a disappointed Guenevere asks, coquettishly, why not? There's no one around to see him, and he's far too big and strong for her to stop him. Ten minutes later into the musical, they are married.

Clearly we are in a universe long ago and far away.

To put this in perspective, "Camelot" was written under the umbrella of postwar optimism, where a Kennedy administration (itself referred to as Camelot) promised youthful benevolence and Mad Men ravished fair maidens whose "no"s sounded (to them at least) like "yes." Given the contemporary cultural climate -- and the climate itself, for that matter -- these first 15 minutes of the play are disorienting to the point of whiplash.

Once you adjust your time machine, however, there is pleasure to be found here. Enter Sir Lancelot, a vainglorious soldier whose ego is matched only by his fidelity to Arthur. Deven Kolluri takes on the role of cad and runs with it, and his rendition of "C'est Moi," one of "Camelot"'s showstopping songs, is pulled off with relish.

The leads, too, are well played. Britney Coleman brings vivacity to her role as Guenevere, injecting pace and energy to this slightly sluggish show. Jeremy Kushnier takes a more traditional tack with Arthur, his white-bearded portrayal leaning on the Richard Harris style of Arthur from the late 1960s. His singing reaches its zenith with "How to Handle a Woman," which closes the first act, and into which Mr. Kushnier introduces a sly irony.

Andrew Diaz's set is lovely, a multi-tiered frame that seems an extension of the woodland setting and evokes the very sylvan paradise that Camelot is purported to be. Scott Schwartz, the director, employs just under a dozen actors, and while this allows viewers to concentrate on the performances, there are times when the stage seems too thinly populated to evoke a kingdom. This is especially true during a tepid jousting scene near the end of the first act in which what was supposed to be a rousing public spectacle seemed an intimate and enervated private event.

The second half is better paced, with the action rousing to its conclusion. Arthur's perfect kingdom begins to unravel, and his troubles with his wife and Lancelot come to a boiling point.

By then the sun had gone down in Bridgehampton, and the beauty of the evening and Mr. Diaz's set became intoxicating. One can only hope Bay Street continues with these lovely outdoor performances.

A word of warning.  You will be asked to mask up for this Camelot.  Even from a pro-mask, pro-vaccine perspective, there is a legitimate debate as to whether Bay Street is over-reaching here.  Serving an audience that will be overwhelmingly vaccinated, coupled with data showing that outdoor transmission is nigh to impossible, some will find the policy well-meaning but needlessly onerous. What there is no debating, however, is that the masks mitigate some of the pleasure of the open-air experience.

On Monday, Bay Street announced that the production has been extended to Sept. 5. Tickets are available on the Bay Street website.