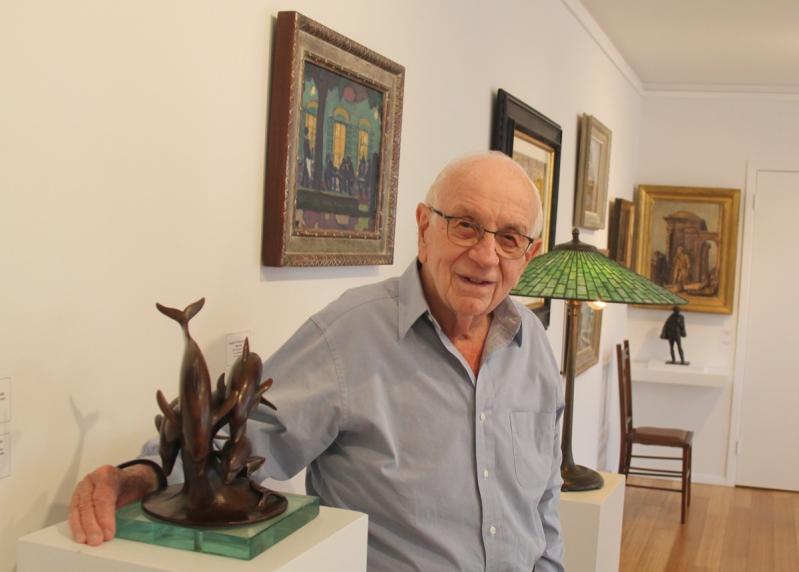 Bernard Goldberg packs quite a few examples of early modernism in his gallery, which is tucked into a passageway in East Hampton.
Durell Godfrey
By Isabel Carmichael

After an absence of more than a decade, Bernard Goldberg Fine Arts is back in East Hampton, at 37 Newtown Lane in a passageway just off the street, specializing in American paintings, sculpture, and decorative arts from the first half of the 20th century.

When he decamped 12 years ago, Mr. Goldberg said, it was mainly because "there were no serious collectors or museum curators scouting the East Hampton dealers, nor were there enough prospective buyers . . . posters, lithographs and prints, yes, but not serious paintings and sculpture or the best in decorative arts. That was reserved for the big cities, New York, Chicago, the major art fairs and the major auction houses."

The subprime mortgage recession of 2007 and consequent stock market decline had something to do with it too. All that is in the past, however, and the art market here is booming as never before, with "great galleries, 16 by my count," said Mr. Goldberg. The reason, he suggested, is Covid, and the wealthy city people who fled the virus to their second homes, and stayed. "Dealers follow the money, and smart dealers began to realize that big collectors were not in New York City -- they were in East Hampton."

A real estate lawyer originally, Mr. Goldberg began collecting American art in the late 1960s and developing boutique hotels in Manhattan at the same time. His goal, he said, was to fill the hotels with "great art, great food, and great music." At the Wales Hotel, the Franklin, the Mansfield, the Shoreham, and the Roger Williams, guests could look forward at tea time to fresh-squeezed orange juice, fresh-ground coffee, scones, strawberries, and more, with exquisite art on the walls and chamber music in the background.

As an art dealer, his approach is similar in showing "Raphael and Moses Soyer, William Glackens, Paul Cadmus, Charles Burchfield, John Storrs, John Marran . . . and Marguerite Thompson Zorach, Agnes Pelton, Chana Orloff. . . . There are connections in how the works here relate to one another." Mr. Goldberg believes that in any installation the sculpture should connect to the paintings and the paintings should connect to sculptures, whether that art is in a hotel or in one's  own home. "Everything should be of a piece," he said, and "It’s the piece that counts. You can't judge an artist by the worst or best work. You buy the piece, not the artist."

The arrival here of so many internationally known dealers has strengthened his own gallery's position, especially, he said, as it is "the only one selling modernist, Ashcan, and regionalist work."

The exhibitions at Bernard Goldberg Fine Arts will have changed twice over the summer. On Aug. 1, a show of modernist art opened, and later this month he expects to exhibit "some of the most complex drawings" of Wood Gaylor, an American early modernist whose work, he said, is just now coming into its own. Roberta Smith of The New York Times wrote a glowing review of the artist this past January.

As far as sales go, said Mr. Goldberg, "seasoned and knowledgeable collectors," both young and old, "buy immediately if they see something of great quality and good value. They know the market and jump in if it's special. The not-so-seasoned, but who love the work, will do research (auction records, comparables, other gallery offerings of the same artist, period, etc.), and then come back if it all checks out."

Mr. Goldberg sold his East Hampton Village house in 2015 and is now "ensconced in a small cottage in the dunes, where I can enjoy the same, but different, American art offered by our two galleries." He plans to stay, even if, he said jokingly, his landlord decides to put a restaurant in the space.