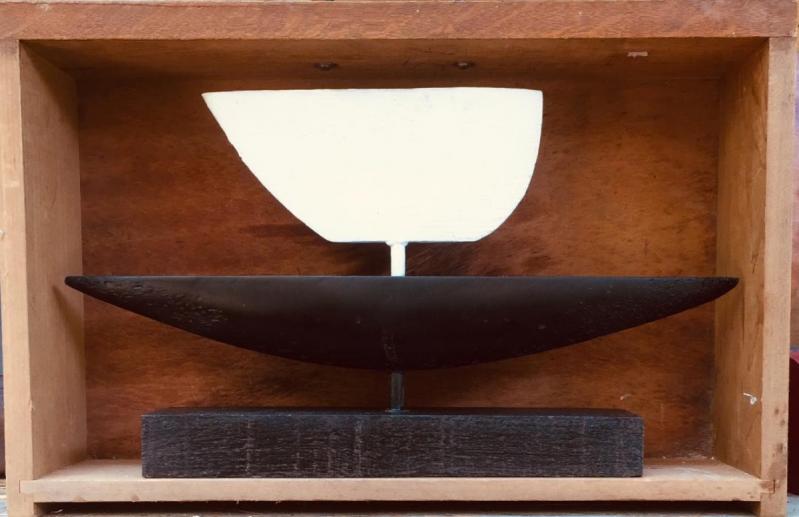 Aurelio Torres's "Two Hulls" is one of many artist-contributed takes on the cigar box featured in this year's Box Art benefit auction for East End Hospice.
By Zoe Lubetkin

There will be ceramics, sculpture, painting, collage, assemblage, and needlework boxes, to name a few, according to, Gabrielle Bamberger, a spokeswoman for the event. A highlight this year is a raffle for a box that incorporates sculpture by the late William King, who participated in the auction for many years.

The auction -- and a free preview reception to meet the artists on Wednesday -- will be held at St. Luke's Episcopal Church's Hoie Hall in East Hampton. The auction is East End Hospice's only live event this year; last year's auction was canceled due to pandemic restrictions.

"The artists have been so very generous with their time and talent," Ms. Bamberger said.

The Art Box Auction was established by David and Marilyn Porter in 2000. The art dealer Arlene Bujese was asked to be chairwoman of the event in 2002, and she continues to serve as curator today. "They really were working from the ground up in terms of providing care out here," Ms. Bujese reflected on the organization's early days. "They needed fund-raisers.

In the beginning, the auction "invited the whole world," Ms. Bujese said. After a while, however, the committee -- currently made up of just four people -- realized they needed to pare things down. They capped the artists at 80 and as the event progressed, no longer needing to solicit artists; instead, artists came to them. A team of around 30 volunteers help guard and show the boxes.

"I do focus on inviting professionals, so they have an exhibition background," said Ms. Bujese. Boxes can be "a microcosm of what this artist might be doing. . . . They can be humorous, they can be profound, some people break up the boxes and make sculptures out of them."

Marilyn Church of Amagansett is one of 10 artists who have participated since the auction's inception. A longtime courtroom illustrator, she is an abstract painter using mainly acrylic on her own time. For her boxes in the auction, however, she has incorporated collage or added fabric and additional texture.

"It's amazing, every year when the invitation comes to do a box how inspiring it is to me for some reason," Ms. Church said. "Something about the size, the parameters, that it has to be on a wooden cigar box, somehow these limitations . . . it's kind of a breakthrough making me new. Something new and fresh every year."

"I thought it would get repetitive, but it never has," she added.

The sentiment was echoed by Ms. Bujese. "Each year, there's just a feeling of delight in the room," she said. "If you see something you aren't drawn to, just go to the next one -- there you might find it."

Boxes can be previewed on Wednesday and next Thursday from 10 a.m. to 4 p.m. The free preview reception with the artists is on Wednesday from 5 to 7 p.m. The main event on Aug. 28 features a silent auction starting at 4:30 p.m. followed by a live auction at 5:45, with Lucas Hunt as auctioneer. Tickets cost $100 and include wine and hors d'oeuvres. They can be purchased online at eeh.org.