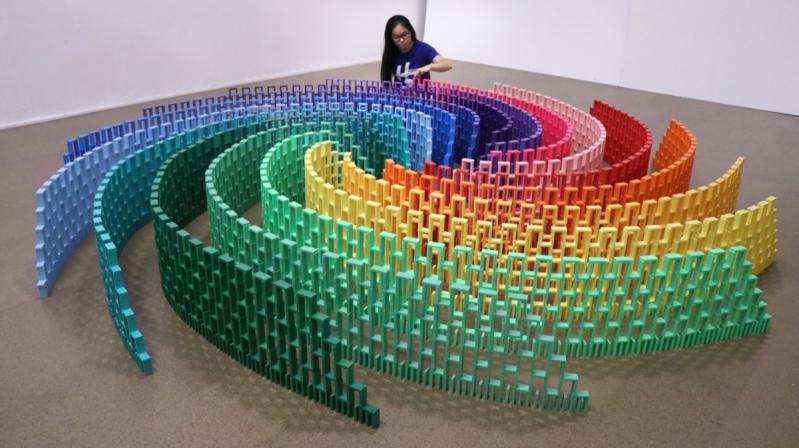 Lily Hevesh, a sensation in the world of dominoes and YouTube, is featured in a new documentary by Jeremy Workman.
Steve Price
By Zoe Lubetkin

HamptonsFilm's SummerDocs series concludes its 13th season on Saturday with a screening of the soon-to-be-released “Lily Topples the World.” The film will be followed by a discussion with the filmmakers with HamptonsFilm's co-chairman Alec Baldwin and its artistic director David Nugent.

Directed by Jeremy Workman and appropriate for all audiences, "Lily" follows the most successful domino artist in the world, Lily Hevesh, over three years, through her first and only year of college, multiple countries, corporate sponsorships, and conventions.

Ms. Hevesh presides over an insanely popular domino channel on YouTube, with 3.31 million subscribers and over 1 billion total views at last count. She has her own brand of dominoes specifically for toppling; among other things, the documentary chronicles the long search to find a producer for them.

Mr. Workman found her domino-toppling YouTube videos while editing "The World Before Your Feet," his last documentary, and began to watch them to relax. They are "incredible and amazing, like nothing you could imagine," he said. "All roads lead to Lily."

The documentary covers “this scope of experience with her when she goes from this young woman to becoming, almost . . . this kind of larger-than-life person,” he added.

She may be larger than life, but at its heart, the documentary is the portrait of a woman -- the only one and the best in her field -- with real goals and unique, pulsing creativity. Dominoes are, by nature, an ephemeral art form, and the documentary captures the hours and days and months of work for the moments where it all falls perfectly down.

Mr. Workman focuses equally on the development of elaborate, many-thousand-domino topple sequences (while filming, he “mostly tried to avoid knocking their dominos over,” he said) and the development of the drive over the three years that made Ms. Hevesh so successful. The work follows her through Vid-con, a convention for YouTubers and their fans, and other events, as she meets fans with 42 subscribers and fans with nine million (Will Smith, whom she later worked with on the film “Collateral Beauty"). It trails her to Paris and Brattleboro, Vt., back to the suburbs of Boston where she grew up, and even earlier and farther back to China, where she was born and adopted.

Ms. Hevesh has seen the documentary five times so far.

"Who I am in the documentary is a much more chill version of who I am in my YouTube videos," she said. When she’s online, "I want other people to watch my videos and feed off my energy and get excited about dominoes and see how cool this awesome hobby is."

In person, however, she describes herself as observant, lower-key. She is inspired by everyday life, physics, and other domino artists, and is currently fascinated by Rubik’s cube art. “My natural state is very chill ... which I don’t really share on my main channel,” she said. This is the self that the documentary captures.

“Lily Topples the World” won the Grand Jury Prize at the SXSW Film Festival in Austin, Tex., and will be released to the public through the streaming platform Discovery Plus next Thursday. South Fork residents can get an early preview at 7 p.m. Saturday at Guild Hall. “I’m just excited to see this film get out there, and talk to people about it, and get people into dominoes,” Ms. Hevesh said.

Tickets for “Lily Topples the World” are $40 per person and are available online at through the Guild Hall and HamptonsFilm websites.